Authorities are urging communities to remain on high alert as more severe weather is forecast for the weekend. Australian Defence Force personnel have been deployed to help in rescue and clean-up efforts. 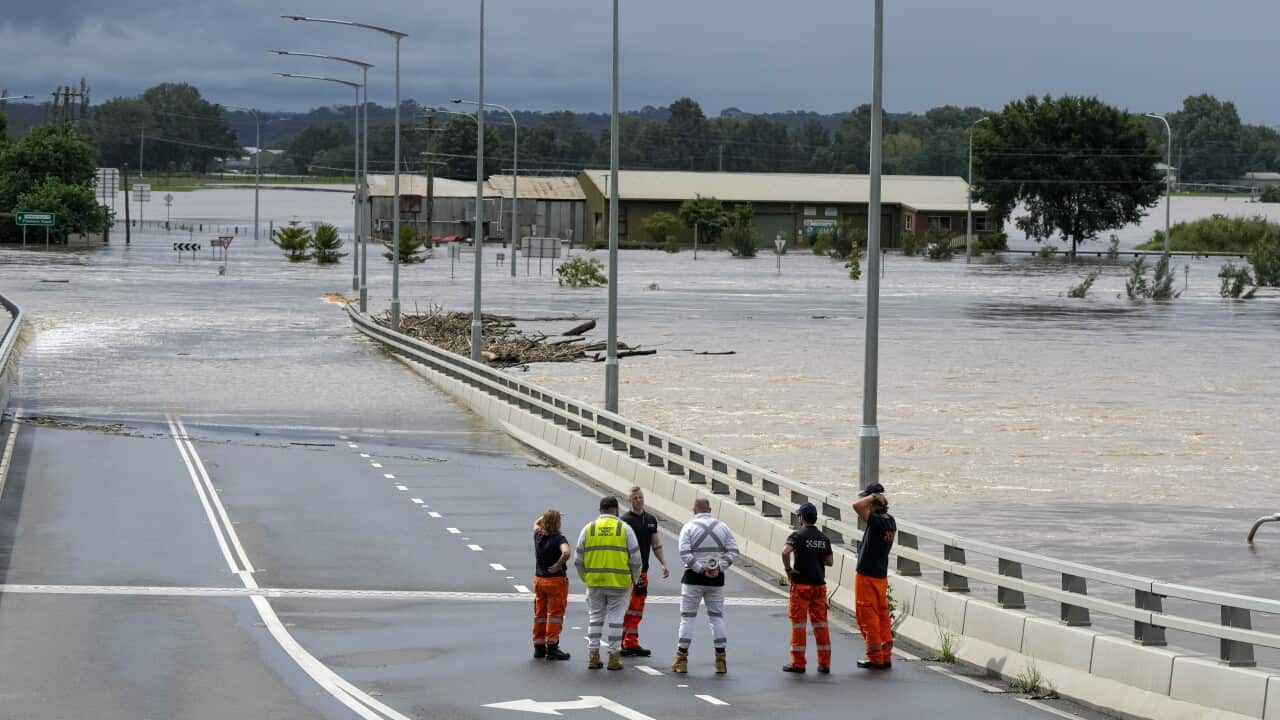 State emergency staff stand near the entrance to the flooded Windsor Bridge on the outskirts of Sydney on 3 March. Source: AP, AAP / Rick Rycroft

A man's body has been found after catastrophic floods in southeast Queensland, taking the state's death toll to 10, while the number of flood-related fatalities in New South Wales has risen to six.

Queensland Police Commissioner Katarina Carroll said the 53-year-old's body was found under a wharf at the Port of Brisbane on Thursday night, four days after he was reported missing.

He is the 10th person to have died after three days of relentless rain triggered flash flooding and caused major rivers to break their banks across vast areas from Gympie to the NSW border.

Advertisement
"All of these deaths are flood-related, some completely unexpected where water has risen very, very quickly in areas that we're not used to," Ms Carroll told reporters on Friday.

"So over the next few days as showers and storms and rain continue please be aware of that flash flooding, be aware of your circumstances."

The region remains on alert for life-threatening floods from dangerous thunderstorms, with more than 17,000 properties and businesses damaged by floodwaters.

Queensland Fire and Emergency Services Commissioner Greg Leach said there have been 650 swift water rescues and emergency services have received almost 12,000 calls for help since the floods began on the Sunshine Coast 11 days ago.

"We still have around 900 tasks outstanding so it will take us another two to three days to get to you," he said.
READ MORE
Some evacuees allowed to return home in NSW with heavy rain to persist for mid-north coast

Emergency Management Minister Bridget McKenzie says the flood damage bill is expected to enter the billions of dollars as stories of devastating losses continue to surface.

Farmers are unable to access dairy cattle, which need to be milked regularly and many animals will need to be euthanised and their carcasses disposed of in a safe manner.

"Beyond the dairy industry, we heard from food processors (where floods) shut down 10 meat processing works which actually process a third to a quarter of Australia's red meat," Senator McKenzie said on Friday.
"Seven thousand people are employed in these 10 facilities that have been impacted by the floods so that is a significant concern."

More than 15,000 residents are without power and schools remain closed across the southeast due to concerns about "unsettled weather".

And there are 260 people still living in emergency evacuation centres with communities west of Brisbane and north of the city in Gympie still cut off by floodwaters.

A member of the Australian Defence Force helps with clean-up efforts following floods in Lismore, NSW. Source: AAP / Jason O'Brien
The Commonwealth is working with Queensland to deliver further support to flood-affected areas, asking the state government for a list of projects where funding is required to rebuild.

The package includes grants of up to $75,000 for primary producers and up to $50,000 for small businesses and not-for-profit organisations.

Flood stricken communities across Queensland and NSW are being helped in clean-up efforts by more than 2,000 defence force personnel, with many areas still underwater.

Mr Dutton said ADF personnel are stretched over a geographically huge area spanning the southeast corner of Queensland down the east coast towards western Sydney.

The remnants of Drift Restaurant can be seen in Brisbane, as southeast Queensland braces for more damaging rain that could delay the clean-up after flooding. Source: AAP / AAP
"The effort on the ground is frustrated in some areas because it is inaccessible even to the ADF with their vehicles to get in and start the clean-up," he told the Nine Network on Friday.

"There is a sense of reassurance when the ADF rolls into those streets, and they know that ... they understand the gravity they bring to a local area to boost spirits and to help people get back on their feet."

The death toll from the northern NSW floods event has risen to five after police found the body of a man in his 40s near Terragon on Friday afternoon.

He has not yet been formally identified.

Six people altogether have since lost their lives in NSW, including a man from the Central Coast last Friday.

While parts of Greater Sydney have been spared major flooding after less rain fell in the area than expected, the focus is switched to the Hunter and mid-north coast regions.

The Bureau of Meteorology (BOM) has issued a severe thunderstorm warning for the Hunter and the mid-north coast, warning expected heavy rain could lead to flash flooding during the day.
Some 130,000 homes in the path of a spilling Warragamba Dam in the Hawkesbury-Nepean region in western Sydney got a reprieve on Thursday afternoon after being told any flooding was likely to be less than the levels seen in March 2021.

The BOM said flooding was still expected at Windsor, as the Hawkesbury and lower Nepean rivers continue to rise.

The NSW SES on Friday morning told residents living around the lower areas in the town of Portland, near Lithgow, on the Hawkesbury River, to evacuate and move to higher ground.

And people in the eastern part of Wisemans Ferry, northwest of Sydney, were told on Friday morning to get ready to evacuate properties around the town centre in the next few hours.

Northern NSW disaster not over yet

While the low-pressure system that brought hundreds of millimetres of rain and devastating flooding over the past week was expected to ease into Friday, more severe weather could be on the way this weekend.

It means flood-devastated communities, such as Lismore and Ballina, could be hit with delays to their clean-up efforts in the coming days.

More than 280 ADF members are being deployed to the Northern Rivers region to support a mammoth clean-up, working alongside around 600 police and emergency crew members.

The SES responded to more than 2,500 requests for assistance and conducted 144 flood rescues in the 24 hours to 5pm on Thursday.

The federal government announced a joint $435 million support package with NSW on Thursday, with a second package in the works.

Since the flooding started, $62.7 million in disaster recovery payments have been provided in relation to 52,000 claims lodged with the federal government.
SHARE
6 min read
Published 4 March 2022 at 7:09am, updated 4 March 2022 at 8:16pm
Source: AAP