Anzac Day dawn services will be cancelled and all people in the affected regions must now wear masks when leaving home. 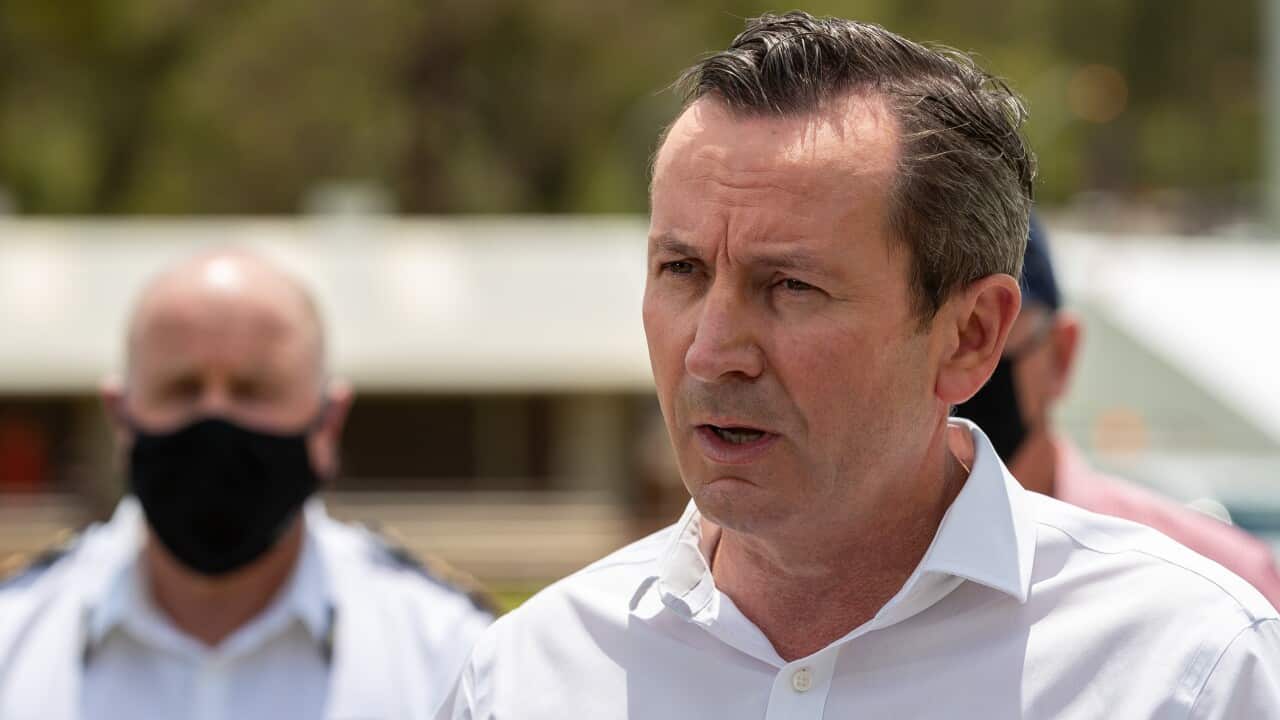 WA Premier Mark McGowan has held an emergency press conference after a man tested positive for COVID-19 after travelling from hotel quarantine in Perth. Source: AAP

Metropolitan Perth and the Peel region will go into a three-day lockdown from midnight local time on Friday after a hotel quarantine outbreak led to community COVID-19 transmission.

West Australian Premier Mark McGowan said the lockdown was a necessary measure after two people, including a man who stayed in hotel quarantine before flying to Melbourne, spent days in the community while infectious.

Anzac Day dawn services will be cancelled and all people in the affected regions must now wear masks when leaving their homes.

Advertisement
"I know this is hard to take and I wish we didn't need to be doing this," Mr McGowan told reporters on Friday afternoon.

"But we can't take any chances with the virus. We just can't."

The lockdown announcement caused travel between New Zealand and WA to be put on pause.

“As set out in our trans-Tasman bubble protocols, travel between New Zealand and Western Australia has been paused, pending further advice from the state government,” New Zealand COVID-19 Response Minister Chris Hipkins said on Friday night.

An Air New Zealand flight due to leave Perth on Friday night was cancelled.

Meanwhile, Victorian authorities are contact-tracing passengers and anyone who has returned to WA will be required to self-quarantine for 14 days.

NSW Health said it would commence screening of flights from Perth to identify any passengers who may have attended exposure sites in WA.


Queensland will require anyone who has been in Perth or Peel since 17 April to comply with the requirements of the WA lockdown.

Mr McGowan said he has asked for the number of international arrivals per week to WA be cut from 1,025 to 512 for the next month.

"Given the situation around the world, with cases increasing and the stress on our hotel quarantine system, it is important we have a pause on the number of cases coming into our quarantine facilities," he said.

"COVID-19 is incredibly challenging as we are experiencing. It has been more than a year and WA’s experience of community transmission has occurred before, a year ago, but this has been an incredible result that we have achieved till now. We need to go back to what we know best."

The Victorian man who tested positive for COVID-19 after travelling back from quarantine in WA arrived in Melbourne on Wednesday. He was advised upon arrival he was a close contact of a positive case in the hotel.

Victorian Health Minister Martin Foley confirmed the man returned a positive test on Friday morning, ending the state's 55-day run of zero locally transmitted cases. He has been in isolation since arriving in Victoria.

“This is an important and timely reminder this global pandemic is not over," Mr Foley said.

Authorities are working to contact other passengers on Qantas flight QF778, who are required to get tested and isolate for 14 days.

Mr Foley said the man wore a mask while on the flight and travelling through the airport. He said he was not aware of how many people were aboard the flight.

"We will be examining those movements for contact tracing purposes and for the purposes of establishing should there be any exposure sites," he said.

WA authorities on Thursday revealed there had been
virus transmission in the Mercure Hotel Perth
, which is being used to quarantine returning overseas travellers.

Two guests staying in rooms opposite each other tested positive for the virus and were later linked through genomic sequencing, the health department said in a statement.

Other guests who stayed on the same sixth floor at the same time were previously released from the hotel after testing negative.