A group of young multicultural student have created a music video calling for unity across all cultures in Australia. 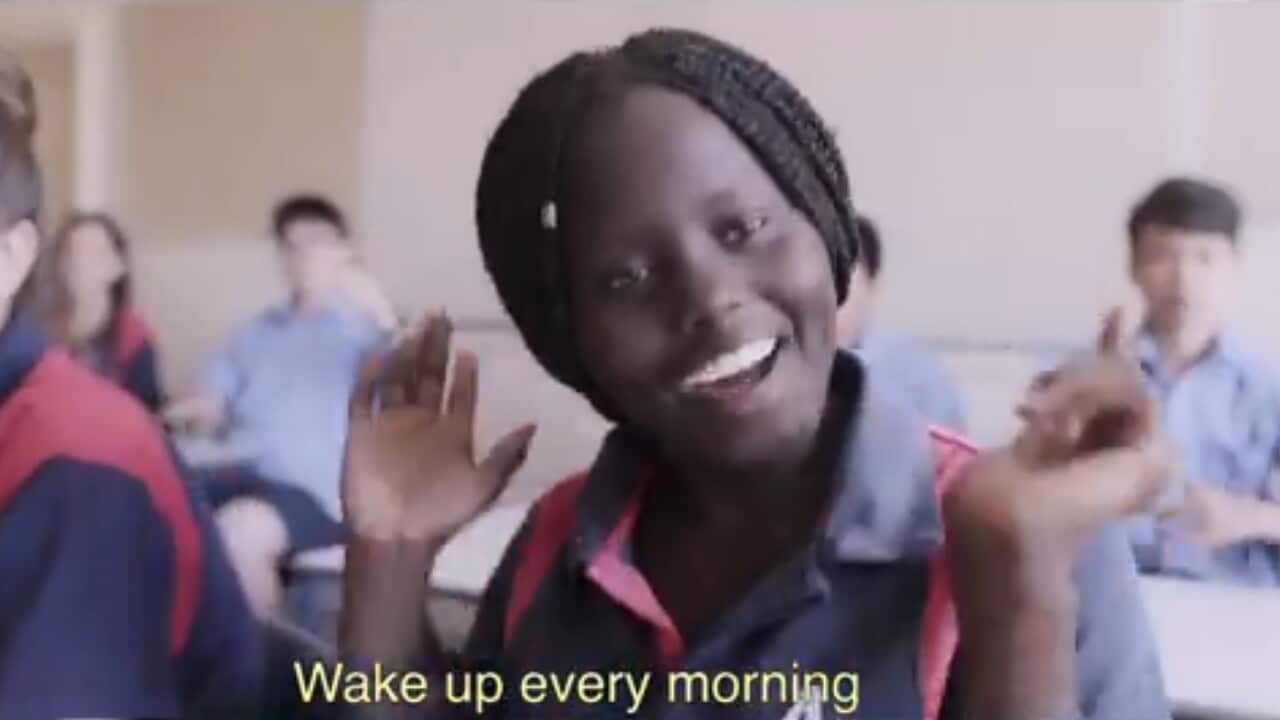 A student singing in the music video Source: SBS News

Young students are the stars of a new music video calling for unity and acceptance across all cultures across Australia.

The song, titled “Same drum”, was created by students from the Intensive English Centre (IEC) at Aranmore Catholic College, Perth.

It’s designed to spread a message they believe is important for eveyone who migrates to Australia - embrace Australian life, but never forget your cultural roots.

The music video was unveiled at the start of Western Australia's Harmony Week, which incorporates Harmony Day celebrations.

The song features four languages– Swahili, Dinka, Kinyarwanda and English – and was written by the students as part of a project by artist and filmmaker Poppy van Oorde-Grainger.

“The kids were so excited, especially the IEC students who’ve only recently arrived in Australia,” Ms van Oorde-Grainger said.

“I think for them to have the opportunities to work together as a team, learn new skills like filming and singing and dancing, they were stoked.”

Those skills gave the students involved a chance to share their thoughts on life in Australia, including Frank Mucho who rapped on the track.

“Sometimes people look down on others that don’t speak English,” Mr Mucho said.

"This project gives us kids an opportunity to explore our ideas and talents and break stereotypes.”

Using music to share their message made sense to singer Juk Yuang.

“Most of us like listening to music so that’s a pretty good way of letting other people know [about our] cultures.”

Triza Garang and Kalungila Lutombo danced in the video clip and said its message can’t be understated.

“It’s really important to most of the refugees and migrants to tell them to be proud of where they come from,” Ms Garang said.

“Show your talent to the world, don’t just sit there and hide your talent,” Ms Lutombo said.

“There’s people out there who want to hear you sing or dance or do whatever you are good at.”

Helping the students to produce and record their song was Optamus, from award-winning hip-hop group, Downsyde.

“It can be challenging but it’s incredibly inspiring to see these guys discover language and mixing it with English as well,” he said.

“When you’re in a classroom environment and you bring instruments in, I think there is immediate interest.”

Aranmore is one of the most diverse schools in Perth with a wide range of cultures studying together.

For Principle Declan Tanham, making sure all of his students thrive is a core focus, especially if they’ve come from a challenging environment.

“The students, when they arrive, often come with the trauma that arises from being involved in a conflict situation,” Mr Tanham said.

“It takes them quite a while to become comfortable in a new country, a new school, in new classes, a different way of teaching.”

“It’s really very gratifying to see the students settled into the school and become quite at home. As I said to the students recently, we all come from somewhere.”