PM Tony Abbott has vowed to deepen bilateral co-operation with Iraq in its battle against the Islamic State group during a surprise visit to Baghdad. 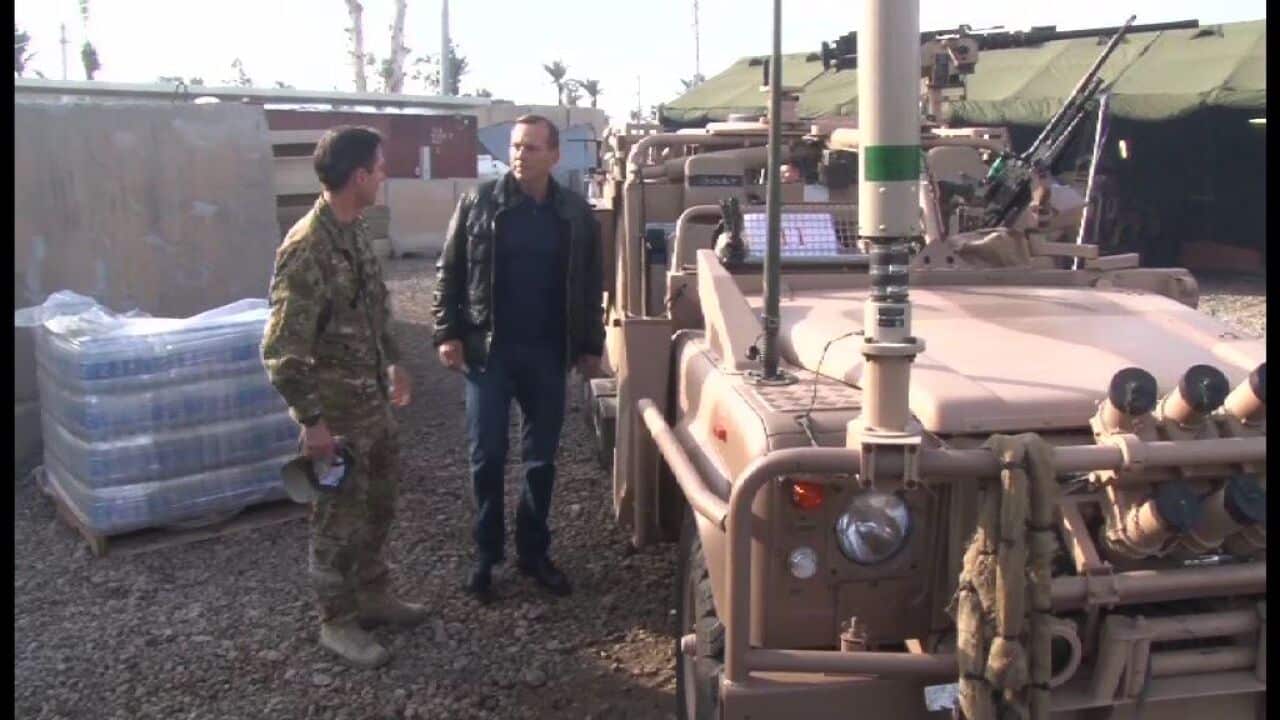 Prime Minister Tony Abbott has vowed Australia will stand with Iraq against the Islamic State militants during an unannounced secret visit to Baghdad.

Mr Abbott also pledged an additional $5 million in aid as he held talks with his Iraqi counterpart, Haider al-Abadi.

There was some outcry when it was revealed a TV crew was not allowed on the visit, with a member of the PM's staff filming and distributing footage to the media instead.

Advertisement
A camera crew sent by the major TV networks was left behind in Dubai unexpectedly, with many journalists taking to Twitter to vent their frustration at the restriction to media access.

The reason given was that "security reasons" would not permit visa approval for the media delegation, but no evidence or further explanation was provided.

Mr Abbott and Mr al-Abadi discussed military co-operation between the two countries, including the training and equipping of Iraqi soldiers.

The prime minister said Mr Abadi had "called on the Australian side to increase the arming and speed up the training and distribution of what is needed by the Iraqi forces to decide the battle and eliminate the (IS) organisation".

"We have also seen exhortations from the death cult to people right around the world to engage in acts of terrorism, and even Australia has had its brush with terrorism in recent weeks," Mr Abbott said, referring to the recent Sydney cafe siege.

"We are determined to deepen our co-operation with the government and the people of Iraq in the weeks and months to come.

"Not because we are a country which goes forward seeking foreign fights, but because where our vital national interests are threatened, where universal values are at stake, Australia should be a strong partner."

Mr Abbott also attended a lunch barbecue with members of the Australian Defence Force who are part of the US-led coalition carrying out air strikes against IS.

He indicated that he had intended to visit at Christmas time but had been unable to as a result of the Sydney siege.

The prime minister was accompanied on the trip by new Defence Minister Kevin Andrews and Chief of the Defence Force Air Chief Marshal Mark Binskin.

The $5 million pledged by the government will enable the World Food Program in Iraq to provide food for approximately 350,000 people for the next month.

It brings Australia's humanitarian assistance to Iraq to $22 million since June last year.

Australia has donated between between $95 and $143 million per year to the World Food Program (WFP) since 2011.

The contributions to the WFP coincide with a rise in Gross National Income per capita, adjusted for international comparisons.