Questions were raised after heavily armed men were photographed on patrol in Port Moresby. 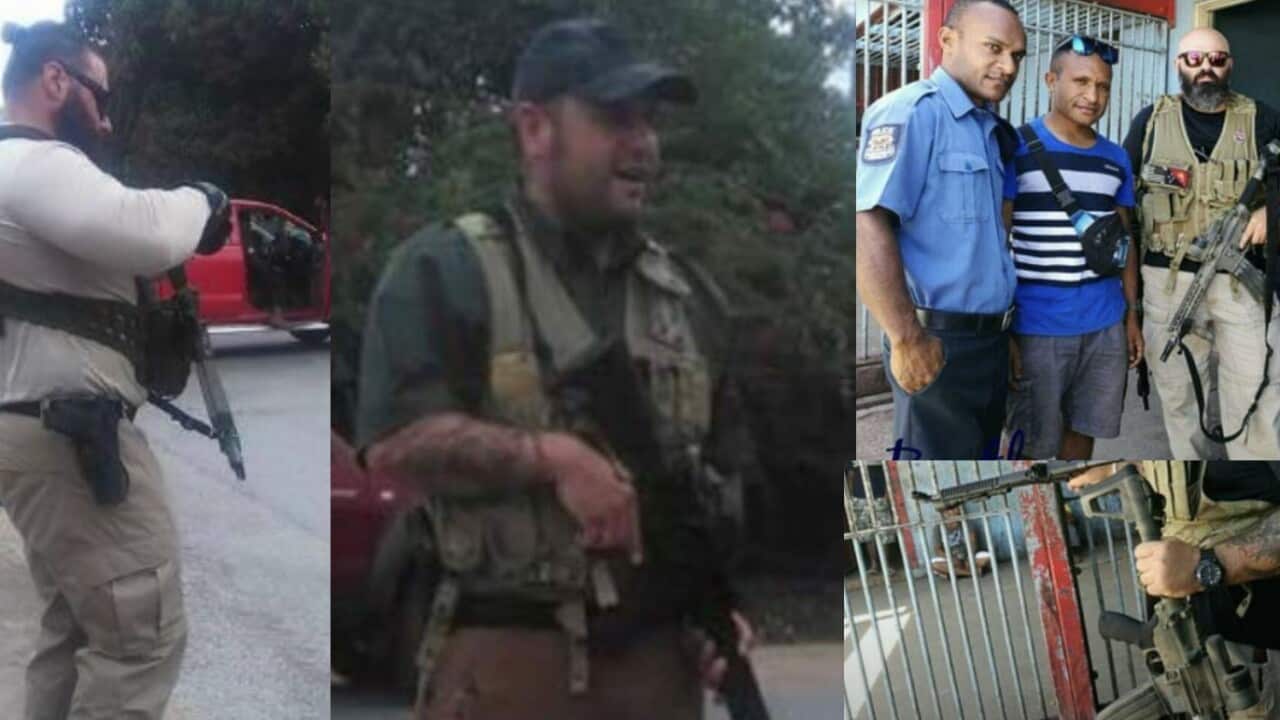 An argument over the use of private US security contractors has erupted in Papua New Guinea after heavily armed men were photographed on patrol in the capital with local police.

Australia spends tens-of-millions of dollars in foreign aid to send federal police to PNG to train local officers but they are not allowed to carry guns.

Photos of the foreign contractors carrying assault rifles and side arms on the streets of Port Moresby sparked outrage in the country and claims their presence is illegal.

Advertisement
“There is no issue about it, through social media people raise all sorts of issues and it's nothing,” Papua New Guinea's police commissioner Gari Baki said.

“This is a police arrangement and when they are deployed, and if there’s issues arising from it, they bring it up, but at this point in time there’s nothing.”

Former prime minister Sir Mekere Morauta called on Commissioner Baki to resign or be dismissed for the “illegal” operation.

“His is a constitutional office. The holder of such offices must be beyond reproach, and Mr Baki does not fit into that category. He must go,” Sir Mekere said.

“It is time for the Prime Minister to show some leadership by taking take action against Mr Baki, and by establishing the facts about the operation and making them public.

“People remain extremely concerned about this scandal and only a full independent inquiry can ease their fears.”

No warning was issued by PNG authorities to the public that armed US security contractors would be engaged in policing until the photos emerged on social media over the weekend.

“We invited them into PNG in early February this year, they did a presentation, which included other government departments, and they displayed to us the capabilities that they would be able to provide to PNG,” Commissioner Baki said.

“What they’re doing is observation and training assistance here, in (Port Moresby). We haven't sent them out to other parts of the country.”

The five members of little-known US contractor Laurence Aviation and Security Group (LASG) have been stood down but remain in Port Moresby.

Dr John Coyne, from the Australian Strategic Policy Institute (ASPI), is a former senior AFP officer who has served in PNG.

“It's strange and there wouldn’t seem to be any legal basis for these private military contractors to carry with them firearms nor to undertake raids,” he said.

"There's been no announcement of legislative changes and we saw this the last time the AFP operations were suspended in PNG, the issue was about carrying firearms on patrols.

“We should be concerned and people are asking the question: are these guys special forces in support of APEC (due in Moresby next year)? Are they Australian? Where are they from? And what are they doing?”

LASG’s company president Peter Hillman was born and raised in PNG to missionary parents, and has also reportedly has worked as a missionary in PNG and Africa.

The company did not respond to SBS enquires.

Two decades ago the use of mercenaries during the Bougainville crisis sparked violent protests.

The Sandline affair led to the resignation of then prime minister Sir Julius Chan.

Jerry Singirok is the former head of the PNG defence force, who ordered the arrest of the Sandline mercenaries.

“People who are not identified either as police force or defence force is very suspicious and may warrant an investigation for the presence of such people,” he said.

“To the best of my knowledge civilians, in possession of high powered weapons, must report to some kind of chain of command.”

Armed Australian Federal Police were thrown out of PNG in 2005 because their presence was ruled illegal by the country's highest court but returned in 2008 unarmed.

About 70 officers have been deployed and $48 million in Australian foreign aid money allocated for training ahead of next years's APEC summit of world leaders in Port Moresby.

The AFP referred enquires related to this latest incident to the PNG police.

“The AFP has no comment to make on these arrangements,” it said in a statement.

“Training of an armed response unit is not a part of the policing partnership.

“Members of the AFP in PNG are deployed in an advisory capacity only; they do not have an operational role and do not have executive (arrest) powers or authority.”