Western governments have been accusing Belarusian leader Alexander Lukashenko of luring migrants to his country and sending them to cross into Poland in retaliation for sanctions. 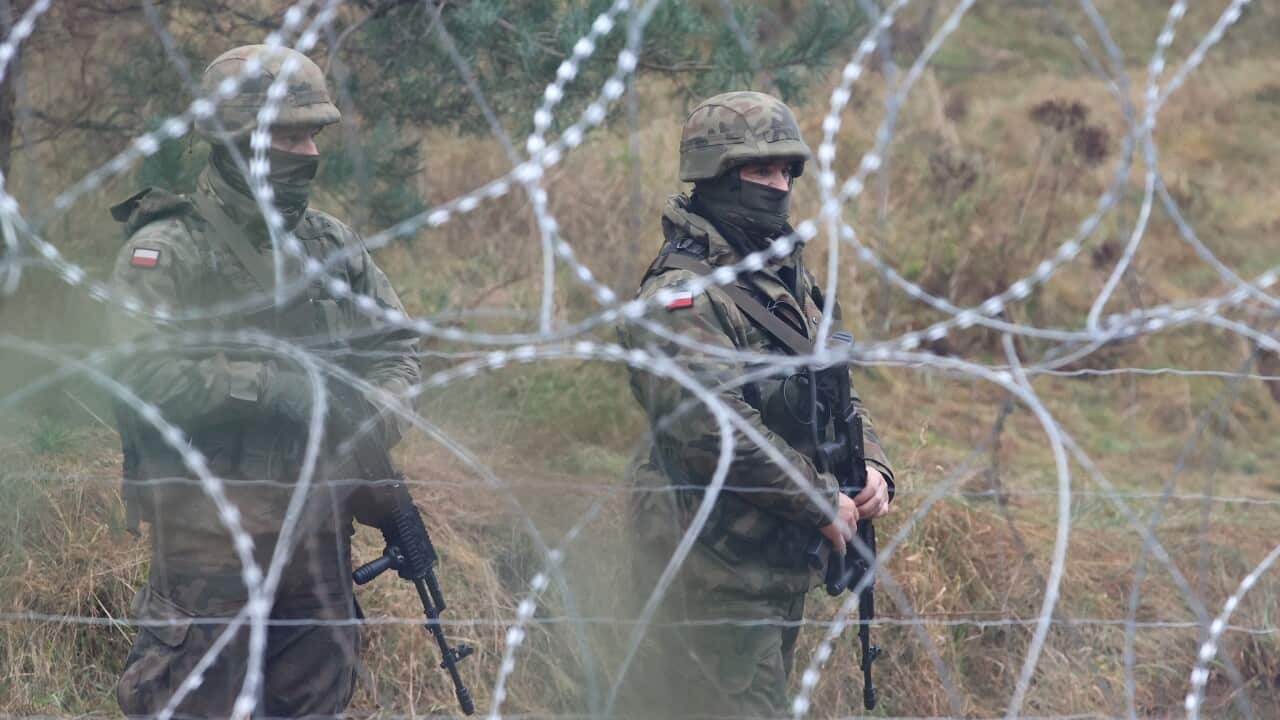 Polish servicemen behind a barbed wire fence at the Belarus-Polish border in the Grodno region, Belarus, 10 November 2021. Source: BELTA

Poland said Wednesday it had seen a surge in attempts to breach its border and pushed back hundreds of migrants to Belarus, accusing Minsk of "state terrorism" by provoking a new migrant crisis in Europe.

Concern was growing for more than 2,000 migrants - mainly Kurds from the Middle East - who are trapped at the border, with the UN calling their plight "intolerable" and demanding action.

Western governments accuse Belarusian strongman Alexander Lukashenko of luring them to his country and sending them to cross into Poland in retaliation for sanctions.

Advertisement
"What we are facing here, we must be clear, is a manifestation of state terrorism," Polish Prime Minister Mateusz Morawiecki told reporters in Warsaw at a news conference with visiting EU chief Charles Michel.

Mr Michel said new sanctions against Belarus "are on the table".

European Commission chief Ursula von der Leyen said she expected "a widening of the sanctions" at the beginning of next week.

"This is the attempt of an authoritarian regime to try to destabilise its democratic neighbours. This will not succeed," she said, speaking after a meeting with US President Joe Biden in Washington.

Migrants have been trying to cross the border for months but the crisis reached a new level when hundreds made a concerted effort on Monday and were pushed back by Polish borders guards.

They set up a camp on the border, sheltering in tents and burning wood from local forests to keep warm, blocked by Polish guards behind razor-wire.

In the Polish town of Sokolka near the border, patrols were seen stopping vehicles to check the boots for migrants, as well as lines of military trucks and police vans going to and from the border.

Izabela Korecki, 38, who was walking in the town centre with her daughters, said she felt "tense".

"We hear the sirens and helicopters all the time," she said.

Journalists and charity workers have been banned from the immediate border area by Polish authorities under state of emergency rules.

Poland has sent 15,000 troops to the border along with police and border guards, accusing Belarus of using intimidation to force migrants to breach the border.

Belarus has in turn accused Poland of violating international norms by blocking the migrants and beating them back with violence.

In a back street of Sokolka, Anna Chmielewska, a volunteer with the Ocalenie (Salvation) Foundation, was sorting through a garage filled with donated food and clothes intended for migrants.

"I can't believe we are living in times like these. We are here, we are ready to help but we cannot," she said, explaining that volunteers could only help migrants who make it beyond the border area.

A photo from the migrant camp on the Belarusian-Polish border. Source: Sipa USA Kommersant

Kyle McNally, a humanitarian affairs adviser at Doctors Without Borders who has met with migrants on the Belarusian side of the border, called for "unfettered access" to assist them.

"The people that we have spoken with and we have seen are really in a desperate state and it's getting worse by the day," he said.

Calls for Russia 'to use influence'

German Chancellor Angela Merkel on Wednesday called Mr Lukashenko's main backer, Russian President Vladimir Putin, asking him "to use his influence" with Minsk to stop what she called an "inhumane" instrumentalisation of migrants.

But Belarus and Moscow have said the West should deal with migrant flows caused by its military interventions in the Middle East.

The Kremlin said it was "irresponsible" for Poland to blame Mr Putin for the crisis, while Belarus's foreign minister said the EU was causing the crisis because it wanted a reason to impose new sanctions.

"The migrant crisis was provoked by the EU itself and its states that border Belarus," Vladimir Makei said on a visit to Moscow to meet his Russian counterpart Sergei Lavrov on Wednesday.

Migrants at their camp at the Belarus-Polish border in the Grodno region, Belarus Source: BELTA

Mr Lavrov accused Western institutions of mounting an "anti-Belarusian campaign", and said Russia and Belarus had "closely coordinated our approaches" to countering it.

Thousands of migrants have crossed or attempted to cross from Belarus into the eastern EU member states of Latvia, Lithuania and Poland in recent months.

At least 10 migrants have died on the Poland-Belarus border, seven of them on the Polish side of the border, according to the Polish daily Gazeta Wyborcza.