Over the weekend, Polish Prime Minister Mateusz Morawiecki called the migrant crisis on the Belarusian-Polish border, the EU's eastern frontier, the "greatest attempt to destabilise Europe" since the Cold War. 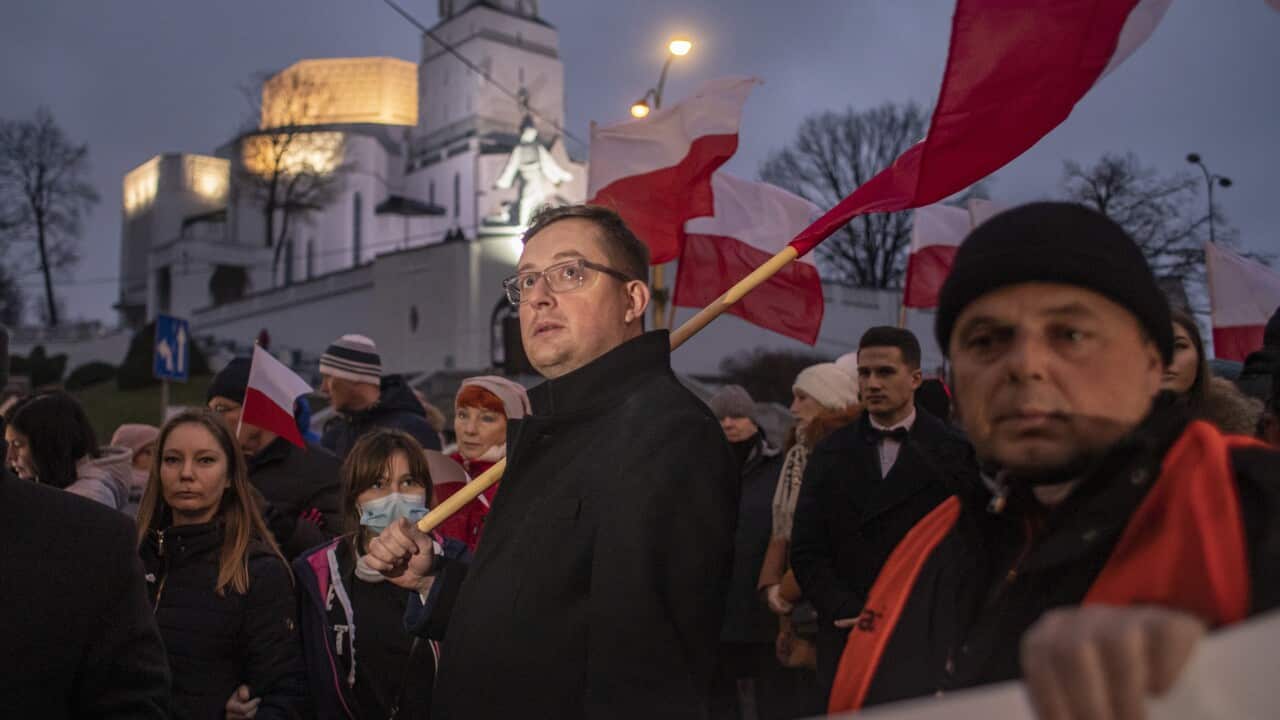 A demonstration in support of the soldiers, policemen and territorial defence forces at the Polish-Belarusian border, in Bialystok, 21 November 2021. Source: EPA

Polish Prime Minister Mateusz Morawiecki on Sunday called the migrant crisis on the Belarusian-Polish border, the European Union's eastern frontier, the "greatest attempt to destabilise Europe" since the Cold War.

Mr Morawiecki made the remarks as he prepared to meet EU leaders at a time when Warsaw is facing not only a border crisis but heightened tensions with Brussels over allegations it is breaching its commitment to the bloc's democratic principles.

Belarus has been accused of creating the crisis by bringing in would-be migrants, mostly from the Middle East, and taking them to the border with promises of an easy crossing into the EU.

Belarus has denied the claim, instead criticising the EU for not taking in the migrants.

Caught in the middle, migrants report being forced to cross the border by Belarusian officials, then pushed back into Belarus by Polish authorities.

Mr Morawiecki tweeted that Belarusian President Alexander Lukashenko had "launched a hybrid war against the EU. This is (the) greatest attempt to destabilise Europe in 30 years".

"Poland will not yield to blackmail and will do everything to defend the EU's borders."

He warned that "today the target is Poland, but tomorrow it will be Germany, Belgium, France or Spain".

Mr Lukashenko told the BBC earlier that it was "absolutely possible" his forces had helped people cross into the EU but denied orchestrating the operation.

Brussels and NATO have also described the migrant crisis as a "hybrid tactic", meaning a combined military-political operation.

"Today on Poland's eastern border we are facing a new type of war, a war whose weapons are migrants and disinformation, a hybrid war," Mr Morawiecki said in Estonia.

The Polish PM visited the Baltic states, two of which also border Belarus, on Sunday.

His Lithuanian counterpart Ingrida Simonyte told reporters "we need to increase pressure on the Minsk regime".

Mr Morawiecki said he will visit other EU capitals this week to urge Western allies "to not let the particular problems currently being discussed between us in Brussels overshadow the gigantic real risks emerging on the horizon".

Some observers say Poland is exploiting the border issue to distract from controversial reforms that the EU believes limit the independence of the judiciary.

The European Commission wrote to Poland on Friday to launch a process that could lead to the withholding of funds over the issue.

"While the problem on Poland's border is serious and requires Western solidarity, for example by sanctioning Belarus, Morawiecki blows it out of proportion," political expert Marcin Zaborowski said.

The policy director at the Globsec think-tank argued that the Belarus action "pales in comparison with the war in Ukraine, cyber attack in Estonia in 2007 and Russian support for far-right extremism in Europe".

Carrying Polish flags, the far-right held a small rally in the city of Bialystok to thank troops for protecting the border.

According to an opinion poll released Sunday by the Rzeczpospolita daily, more than 55 percent of Poles are worried the crisis could lead to all-out war.

The migrants, many fleeing war and poverty, have spent thousands to fly into Belarus on tourist visas.

Once at the border, they are faced with squalid, freezing conditions.

Polish media say at least 11 migrants have died since the crisis began over the summer.

A Yemeni migrant was laid to rest on Sunday in the Polish village of Bohoniki, with his brother in attendance.

Yemen's foreign ministry said he died "as a result of the severe drop in temperatures".

The burial was organised by Bohoniki's tiny Muslim community, mostly descendents of the Tatars who came to the area centuries ago.

The Belarusian health ministry said a World Health Organization mission had arrived to help organise medical support for the migrants.