Pope Francis condemned the exploitation of migrants for political purposes on Sunday during a visit to the Greek island of Lesbos. 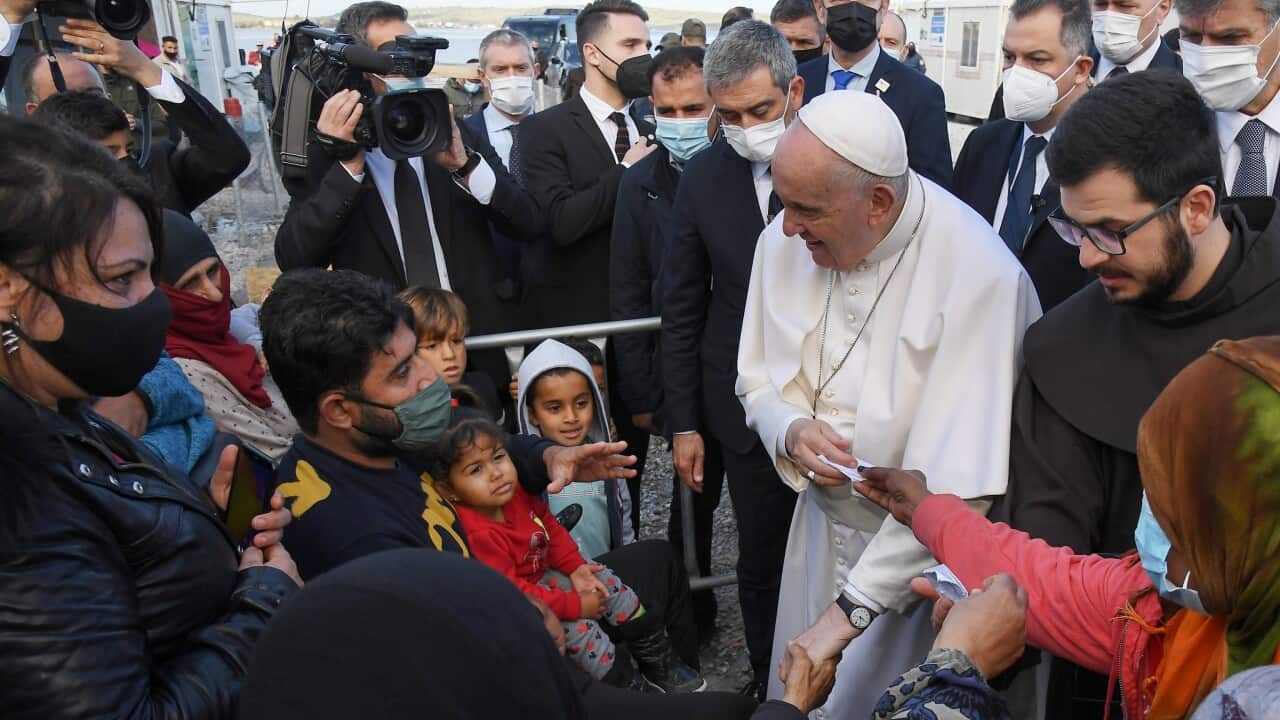 Pope Francis talks to people at the Reception and Identification Centre (RIC) in Mytilene on the island of Lesbos, Greece, 5 December 2021. Source: AAP

Pope Francis on Sunday returned to the island of Lesbos, the migration flashpoint he first visited in 2016, calling the neglect of migrants the "shipwreck of civilisation".

The pope has long championed the cause of migrants and his visit comes a day after he delivered a stinging rebuke to Europe which he said was "torn by nationalist egoism".

"In Europe there are those who persist in treating the problem as a matter that does not concern them," the pope said as he spent some two hours at the Mavrovouni camp on Lesbos, where nearly 2,200 asylum-seekers live.

On the second day of his visit to Greece, he met dozens of child asylum-seekers and relatives standing behind metal barriers and stopped to embrace a boy called Mustafa.

"I am trying to help you," Francis told one group through his interpreter.

People later gathered in a tent to sing songs and psalms to the pontiff, who listened to them, visibly moved.

"His visit is a blessing," said Rosette Leo, a Congolese asylum-seeker at the site.

However, Menal Albilal, a Syrian mother with a two-month-old baby whose asylum claim was rejected after two years on the island, said refugees "want more than words, we need help".

"The conditions here are not good for a baby," she told AFP.

A picture taken on 30 March, 2021 shows a general view of the new refugee and migrant camp of Kara Tepe or Mavrovouni in Mytilene, on Lesbos island. Source: AFP

Pope Francis warned that the Mediterranean "is becoming a grim cemetery without tombstones" and that "after all this time, we see that little in the world has changed with regard to the issue of migration".

The root causes "should be confronted - not the poor people who pay the consequences and are even used for political propaganda", he added.

According to the International Organisation for Migration, 1,559 people have died or gone missing attempting the perilous Mediterranean crossing this year.

Several people have died on the Belarus-Poland border in recent weeks, caught between the two countries' border guards. The European Union accuses Minsk of having "weaponised" migrants against the West.

And 27 people drowned in a single incident last month trying to cross to England. Britain and France have traded barbs over the increasing number of migrants attempting the deadly Channel crossing.

The temporary Mavrovouni tent camp was hurriedly erected after the sprawling camp of Moria, Europe's largest such site at the time, burned down last year.

Greek authorities blamed a group of young Afghans for the incident and security was substantially enhanced for the pontiff's Sunday visit.

The pope's trip to Lesbos was shorter than his last as he later held a mass for some 2,500 people at the Megaron Athens Concert Hall.

In Cyprus, which the pope visited before Greece this week, authorities said that 50 migrants would be relocated to Italy thanks to Francis.

He took 12 Syrian refugees with him during his last visit to Lesbos in 2016.

At the start of his Athens visit on Saturday, Francis said that "today, and not only in Europe, we are witnessing a retreat from democracy", warning against populism's "easy answers".

In 2016, Francis visited Moria with Bartholomew I, the spiritual leader of the world's Orthodox Christians, and Archbishop Ieronymos II, head of the Church of Greece.

The Mavrovouni camp currently holds 2,193 people and has a capacity of 8,000, a facility official said this week.

With EU funds, Greece is building a series of "closed" facilities on Greek islands with barbed wire fencing, surveillance cameras, X-ray scanners and magnetic gates that are closed at night.

Three such camps have opened on the islands of Samos, Leros and Kos, with Lesbos and Chios to follow next year.

Once asylum-seekers are recognised as refugees, they are no longer eligible to remain in the camps, a fate shared with migrants whose requests for protection are rejected and who face deportation.

Many of these refugees are unable to find accommodation or work, another criticism that charities and aid agencies direct at the Greek state.

The groups have also raised concerns about the new camps, arguing that people's movements should not be restricted as well as claiming Greek border officers have pushed back migrants.