The hostages were all released ten hours after a man disrupted a religious service. 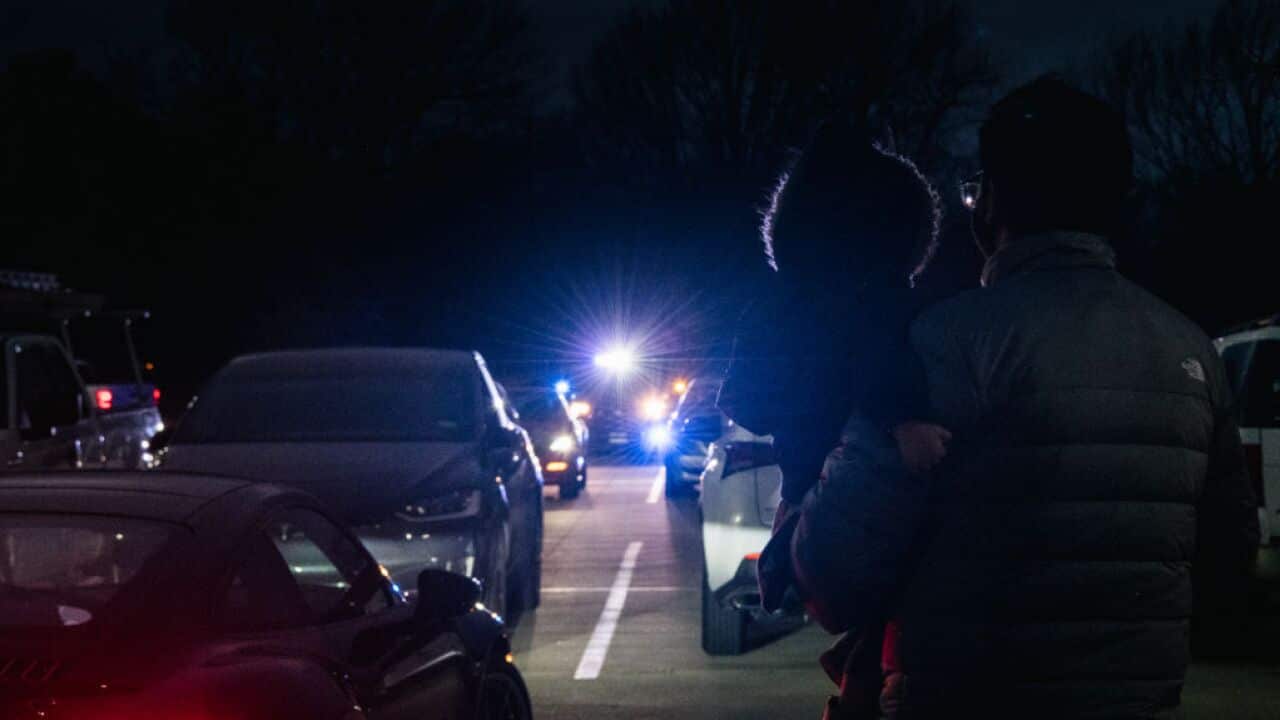 Police responded to a hostage situation after reports a man with a gun was holding people captive at the synagogue. Source: Getty

All hostages being held at a synagogue in Colleyville, Texas, have been safely released more than ten hours after a man disrupted a religious service and began a tense stand-off with police.

Some 10 hours into the crisis, Governor Greg Abbott tweeted that "all hostages are out alive and safe" at 9:30pm Saturday local time.

Advertisement
There were reports from journalists at the scene of a loud explosion and gunshots at the synagogue just before Mr Abbott made the announcement.

One hostage had been released unharmed a few hours earlier. It remained unclear how many altogether had been taken hostage.

Information about the man who had taken them hostage was not immediately available.

With reports the synagogue's much-loved rabbi was among at least four being held, the standoff sparked an outpouring of concern from Jewish organisations around the United States, as well as from the Israeli government.

President Joe Biden had also been briefed on the hostage situation, according to the White House.

Police said they were alerted to an emergency Saturday morning at the Congregation Beth Israel in Colleyville, some 40 kilometres west of Dallas, with reports circulating quickly that it was a hostage situation.

ABC News reported that the hostage-taker was armed and had claimed to have bombs in unknown locations.

Quoting a US official briefed on the matter, ABC reported the man was demanding the release of Aafia Siddiqui, who has been dubbed "Lady Qaeda" by US tabloids.

ABC initially said the man claimed to be Siddiqui's brother, but then later clarified her brother is in Houston. Other experts said the word the man used in Arabic was more figurative and meant "sister" in the Islamic faith.

Aafia Siddiqui's lawyer said she "has absolutely no involvement" in the hostage situation in a statement to CNN. The lawyer confirmed that the man was not Siddiqui's brother and said she condemned his actions.

Police said they were alerted to an emergency Saturday morning at the Congregation Beth Israel in Colleyville. Source: SBS / , The Dallas Morning News

Siddiqui, a former Pakistani scientist, was in 2010 sentenced by a New York court to 86 years in prison for attempted murder of US officers in Afghanistan. The high-profile case sparked outrage in Pakistan.

She is currently being held at Federal Medical Center prison in Fort Worth, Texas.

A live stream of the congregation's Shabbat morning service, available on Facebook for around four hours during the standoff, appeared to capture audio of a man talking loudly - although it did not show the scene inside the building.

In it, he could be heard saying, "You get my sister on the phone," and "I am gonna die."

He was also heard saying: "There's something wrong with America."

Colleyville police said in a tweet at 11:30am that it was "conducting SWAT operations" at the address of the Congregation Beth Israel.

FBI agents were also on the scene, according to journalists, as were Colleyville fire and rescue trucks, Dallas police and police from the nearby city of Southlake.

Beth Israel congregation member Ellen Smith, who grew up going to the synagogue, described the situation as "shocking and horrifying" in a CNN interview.

She said the congregation was a "tight" community, and the rabbi in particular was "the best human I think anyone could ever meet."

But she said it was "not shocking" the crisis occurred in a Jewish community.

"Cases of anti-Semitism have risen lately, but since Jews were first walking the Earth, we have been persecuted," she said. "It feels almost hopeless."

"No one should ever be afraid to assemble in their place of worship," the Jewish Community Relations Council said in a statement.

The Council on American-Islamic Relations condemned the hostage situation and said it was in contact with Colleyville Jewish leaders to "provide any assistance possible."

Rabbi Joseph Potasnik, the executive vice president of the New York Board of Rabbis, said he was grateful to have received calls from people of all religious backgrounds expressing concern and hope for a peaceful outcome.

But he warned that the violence would not stop with the synagogue.

"The person who hates me today is going to hate you tomorrow. So it may start with Jews. It doesn't stop with Jews," he told CNN.