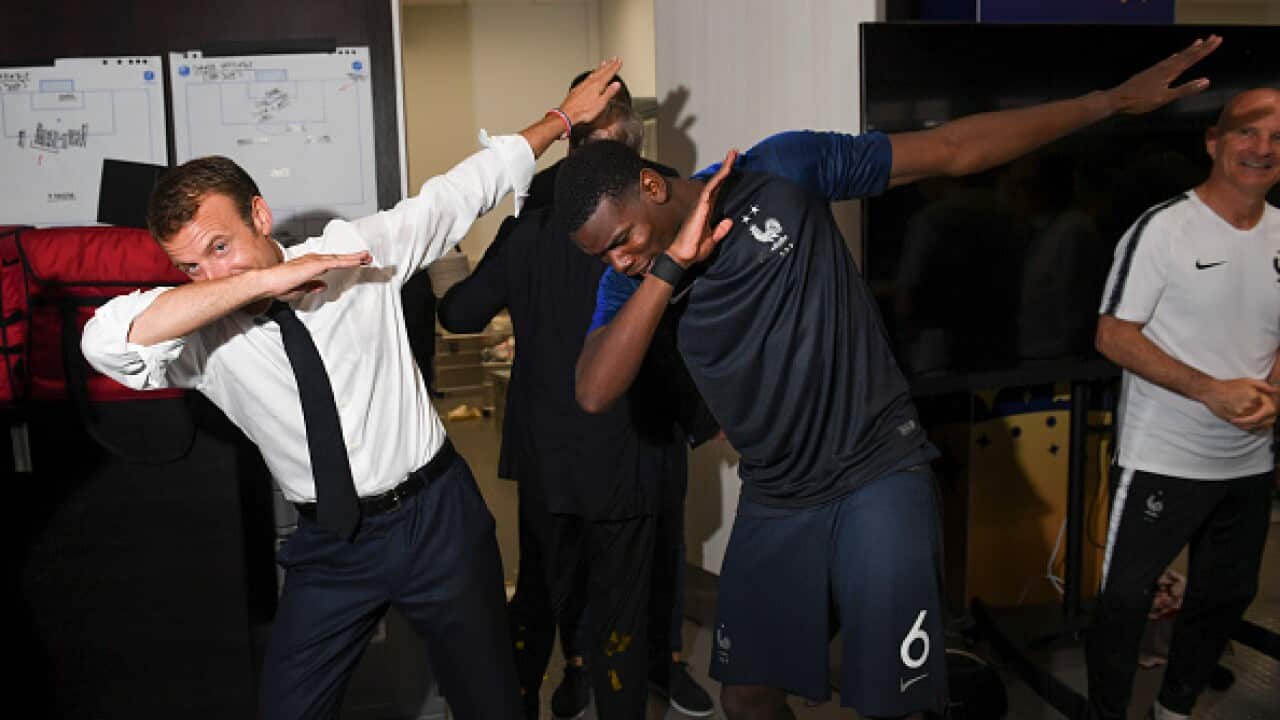 France has been crowned World Cup 2018 champions – and no one was more excited than French President Emmanuel Macron who cheered and fist pumped his way through the match before learning how to ‘dab’ alongside the victorious team.

The Didier Deschamps managed side secured an exhilarating 4-2 victory over Croatia, prompting an outpouring of joy across France. While, in Russia, the 40-year-old president was spotted jumping for joy and pumping his first with each goal.

Advertisement
And it didn’t stop there: In the team’s dressing room, France’s left back Benjamin Mendy and midfielder Paul Labile Pogba taught the president how to ‘dab’ in celebration of the win, with the whole thing caught on camera.

The dab has been popularised by Pogba, during his time playing for English Premier League side Manchester United.

And the cheeky Les Bleus player couldn’t resist backing the celebration up by firing off a sledge towards England fans.
A jubilant looking President Macron pumps the air as France scores again. Source: Getty Images

Singing in French, Pogba was also filmed singing “it’s coming home” in reference to the popular – and ultimately futile - chant of English fans this World Cup.

Mr Macron once again posed with the victorious French team today as they were received by cheering crowds in Paris.

But beyond the dabbing and adoring crowds, the World Cup triumph is a political win for President Macron, who has been promoted a young, dynamic France with an increasingly prominent global role.

"This victory will improve France's image for several years, and almost automatically that of its leader," Pascal Boniface, director of the Institute for International and Strategic Relations, a French think-tank, told AFP.

"It's about soft power and the international prestige of France. Football is now global. Before the Chinese wouldn't have been bothered who won, but now they want to know. Even North Korea will follow it," he added.

Former president Jacques Chirac saw his polling numbers bounce in 1998 when France last won the World Cup even though the ageing Gaullist took little interest in football and barely knew the names of the players.

Giving his first speech as president, Macron had promised to make France feel better about itself and its place on the global stage, which makes the rousing performance of its young, ethnically diverse football squad a perfect gift.

"This win is obviously going to have a magnifying effect on France," said Paul Dietschy, a French historian specialising in football at the University of Franche-Comte.