Myanmar says it has repatriated the first family of Rohingya, despite warnings it is not yet safe to do so. 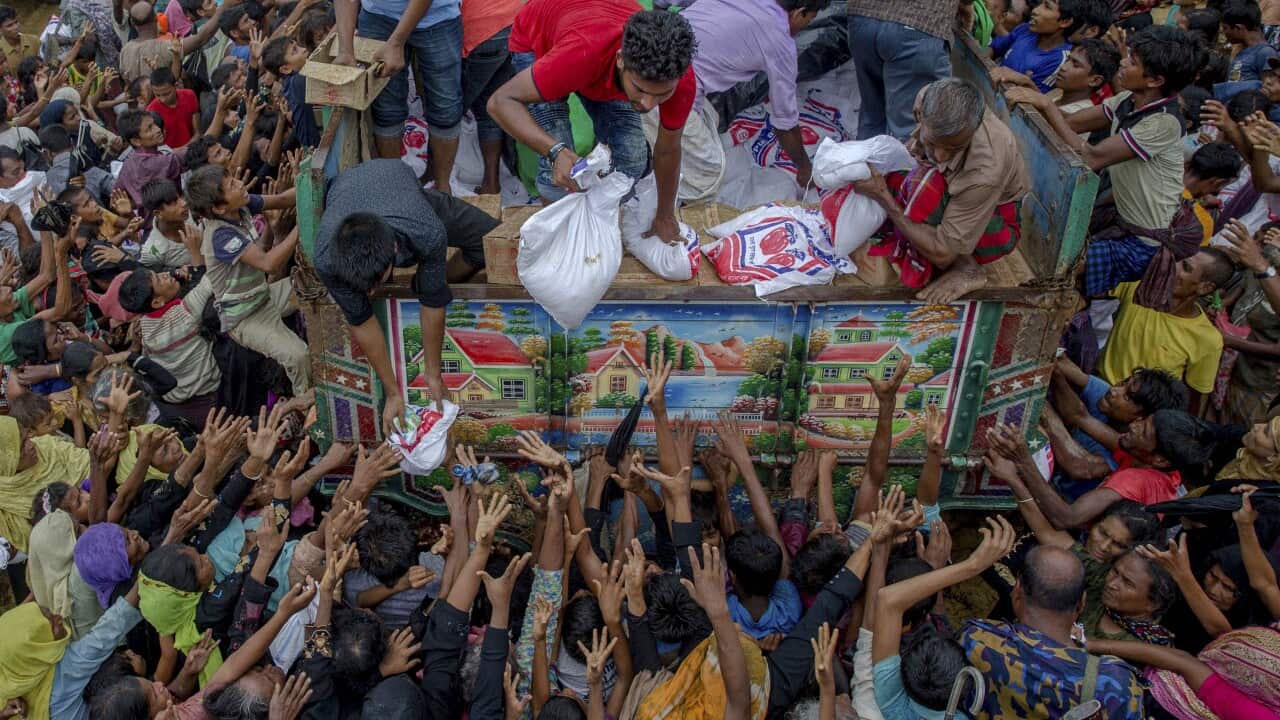 Rohingya Muslims, who crossed over from Myanmar into Bangladesh, stretch their arms out to collect food items distributed by aid agencies. Source: Getty

Myanmar's government said it has repatriated the first family of Rohingya refugees, among the 700,000 who fled a brutal crackdown, but the move was slammed by rights groups as a publicity stunt which ignored warnings over the security of returnees.

Human Rights Watch Executive Director Kenneth Roth told SBS News on Monday the fact "that one desperate family may have chosen repatriation rather than the relative safety of Bangladesh ... doesn't mean anything and certainly shouldn't be assumed to be a trend or a commentary under the abysmal conditions that remain within Myanmar".

The stateless Muslim minority has been living in squalid refugee camps across the border in Bangladesh since the Myanmar army launched a ruthless campaign against the community in northern Rakhine state last August.

Advertisement
The United Nations says the operation amounts to ethnic cleansing, but Myanmar has denied the charge, saying its troops targeted Rohingya militants.

Bangladesh and Myanmar vowed to begin repatriation in January but the plan has been repeatedly delayed as both sides blame the other for a lack of preparation.

According to a Myanmar government statement posted late Saturday, one family of Rohingya refugees became the first to return earlier in the day.

"Of course if you can convince a few Rohingya to come back, desperate people who maybe weren't even admitted fully to Bangladesh, it adds to the fake story ... that things are safe ... and just stop bothering us about what we did to the Rohingya," Mr Roth said.

"Frankly, most Rohingya would be out of their mind to go back, and you see that really in the movement to Bangladesh and the lack of any significant trend to go back."

A statement posted on the official Facebook page of the government's Information Committee said "the five members of a family ... came back to Taungpyoletwei town repatriation camp in Rakhine state this morning".

The post described the family as "Muslim", in line with a government policy not to use the word "Rohingya", which authorities do not recognise as an ethnicity.

Authorities determined "whether they were once living here" and provided the family with National Verification Cards, a form of ID that falls short of citizenship and has been rejected by Rohingya leaders who want full rights.

Photos posted alongside the statement showed one man, two women, a young girl and a boy receiving the ID cards and getting health checks.

It said that the family had been sent to stay "temporarily" with relatives in Maungdaw town.

The post did not mention any plans for further returnees in the near future.

The repatriation announcement is "a public relations exercise in an attempt to deflect attention from the need for accountability for crimes committed in Rakhine State", said Andrea Giorgetta from the International Federation for Human Rights (FIDH).

"Before proceeding with the repatriation of Rohingya, the Myanmar government must recognise and guarantee all their fundamental human rights," he told AFP.

The move comes despite warnings from the UN and other rights groups that a mass repatriation of Rohingya would be premature, as Myanmar has yet to address the systematic legal discrimination and persecution the minority has faced for decades.

The Rohingya are reviled by many in the Buddhist-majority country, where they are branded as illegal "Bengali" immigrants from Bangladesh, despite their long roots in Rakhine state.

They have been systematically stripped of their citizenship in recent decades and forced to live in apartheid-like conditions with severely restricted access to health care, education, and other basic services.

"Right now, the conditions are not conducive to a voluntary, dignified and sustainable return," Ursula Mueller, assistant secretary general for the UN's Office for the Coordination of Humanitarian Affairs, told AFP earlier this month after a visit to Rakhine.

Myanmar must address "critical issues of freedom of movement, social cohesion, livelihoods, and access to services", she added.

A Rohingya refugee who carries his father for the last 3 days is returned to the quarantine area after waiting hours at the Myanmar-Bangladesh border. Source: AAP

Many Rohingya refugees say they fear to return to a country where they saw their relatives murdered by soldiers and where Buddhist vigilantes drove them from their homes.

Many of their original communities were burned to the ground in the violence that Doctors Without Borders says claimed at least 6,700 Rohingya lives in the first month alone.

Myanmar authorities have since bulldozed over many of the charred villages, raising alarm from rights groups who say they are erasing evidence of atrocities and obscuring the Rohingya's ties to the country.