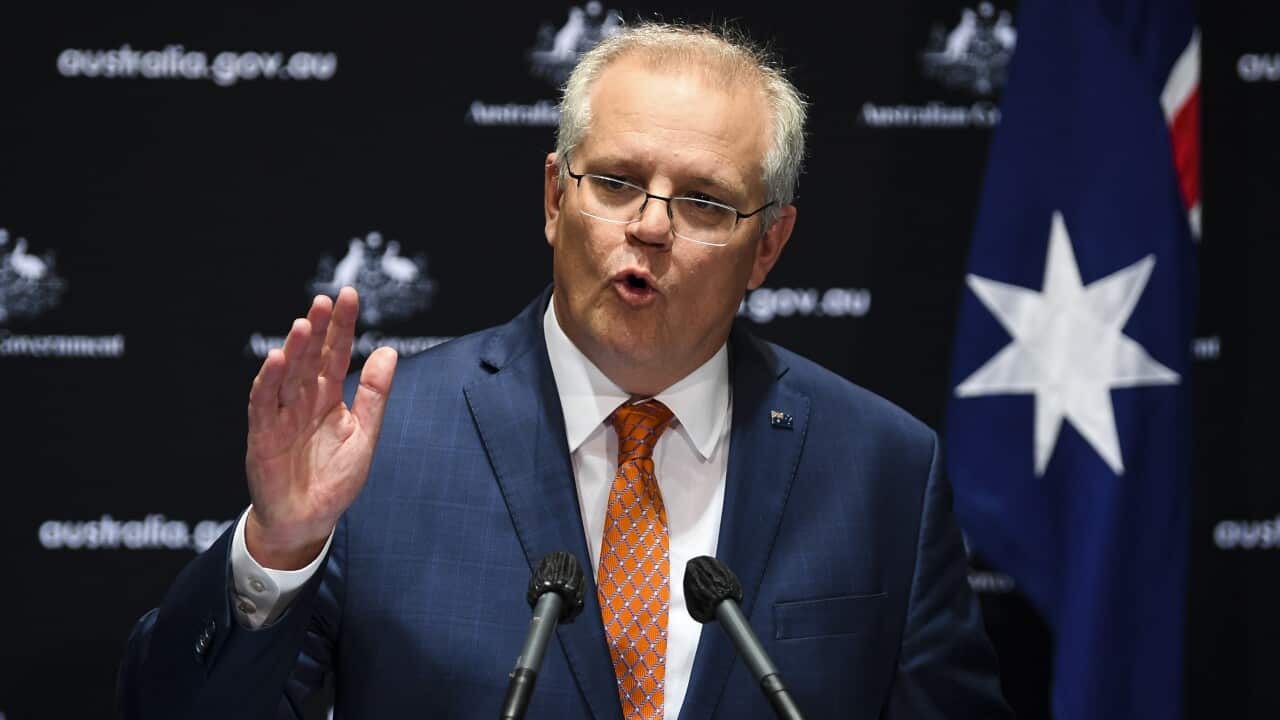 National Cabinet has been postponed after Scott Morrison reported 'technical problems' getting to Sydney. Source: AAP

A push to expand the intake of stranded Australians trying to get home is facing delays after Friday's scheduled National Cabinet meeting was postponed.

Thousands of Australians stranded overseas could soon return home under a deal to allow people to quarantine near Darwin.

The ABC reported on Thursday up to 1000 people a month would isolate at the NT's Howard Springs facility after returning home on commercial and charter flights.

Advertisement
Prime Minister Scott Morrison confirmed an announcement was imminent ahead of his National Cabinet meeting with state and territory leaders.

"There have been extensive preparations undertaken on that matter. We're in the final stages of concluding those arrangements," he told reporters in Cairns on Thursday.

But Friday's meeting has since been postponed due to 'technical problems' that have prevented Mr Morrison's return to Sydney.

The prime minister said more than a quarter of 4000 Australians considered to be vulnerable had returned home in recent weeks.

"We've been working now for some months as we've been getting more and more Australians home, particularly those in vulnerable situations," Mr Morrison said.

Special Qantas flights from London and India are expected to start from next week, while the federal government is also set to lift the cap on international arrivals.

It comes as
pressure is mounting on the Victorian government
to lift restrictions after Melbourne's 14-day rolling average fell to 8.9 on Thursday and just six new cases were detected statewide.

After months of severe lockdown, Melburnians are anxiously awaiting an announcement on Sunday about what freedoms they could regain.

Mr Morrison claimed the federal government did not tell states what to do in their areas of responsibility despite a concerted campaign from senior ministers to end Melbourne's lockdown.

"I'm not here to give advice or instruction to premiers," he said.

Mr Morrison has also been a strident critic of school closures, travel restrictions and Victoria's plan out of lockdown at different stages during the pandemic.

NSW
recorded more infections than Victoria for three consecutive days
, sparking fears the state is on the cusp of an outbreak.

There were six new locally acquired cases in NSW on Thursday, down from 11 the previous day. A further five were detected in hotel quarantine.

The state government wants more than 20,000 people tested each day after the rate fell below 16,000.

Queensland on Thursday recorded one new case in a traveller who returned from Africa and Papua New Guinea, with 15 of the person's contacts now in isolation.