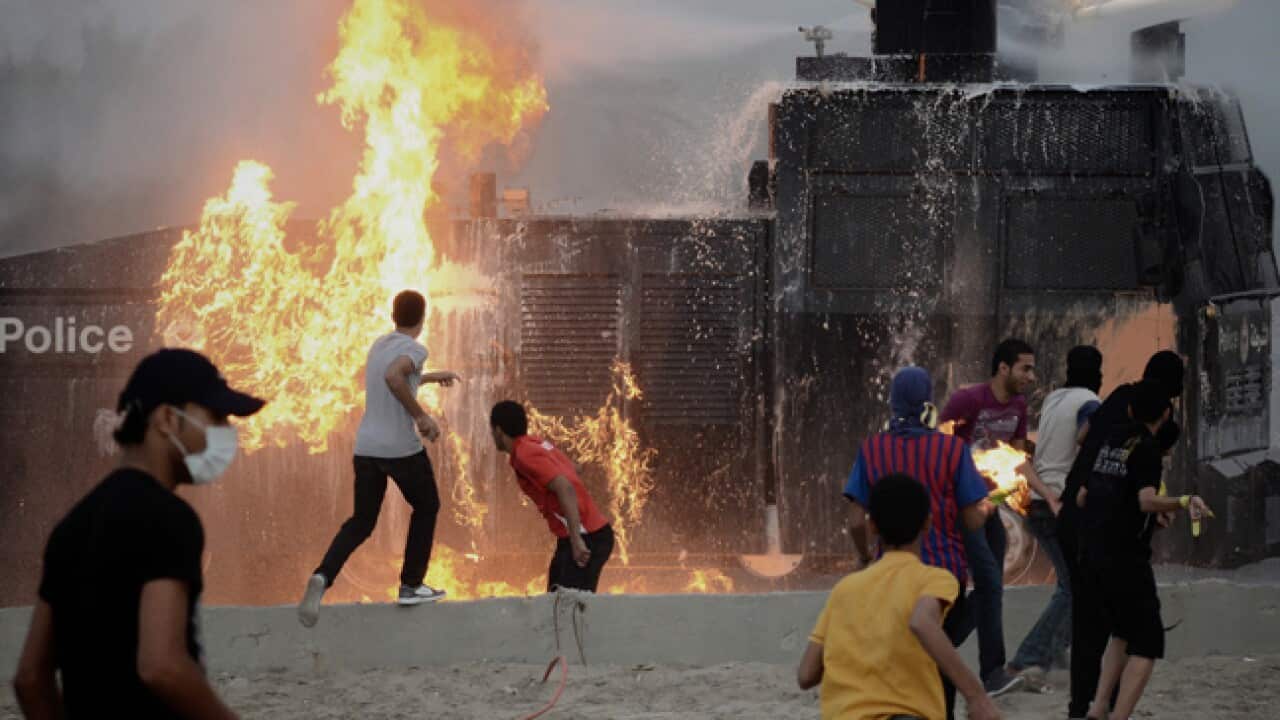 The Bahrain Formula 1 Grand Prix will take place in the capital, Manama, next week amid
calls for its cancellation
by human rights campaigners.

This week, two Bahraini activists, a neurosurgeon, Dr Nabeel Ali, and an opposition parliamentarian, Matar Matar, were in Sydney to raise awareness of the nation's pro-democracy protests, which began on February 15 last year.
Advertisement

SBS spoke with Dr Ali and Mr Matar after they observed
a motion supporting democracy in Bahrain and condemning government retribution
passed unanimously by the NSW Parliament's Upper House.

Q: Dr. Ali, how did the invitation to come to Sydney come about?

A: The Australian Bahraini Youth Movement invited Mr. Matar and myself to bear witness on what has been happening in Bahrain for the past year.

As eyewitnesses on the ground we presented testimonies to the NSW Parliament in their motion to recognise our democratic struggle.

Q: What distinguishes your uprising from other Arab uprisings?

A: When it comes to media coverage of the Arab Spring, Bahrain has become 'The Forgotten Revolution'.

This is due to political interests of various Gulf Cooperation Council (GCC) countries, especially Saudi Arabia and Qatar, manifesting in coverage of Al Arabiya and Al Jazeera that broadcast out of these countries.

The United States also has the biggest geopolitical interests in the Gulf with several navy fleets stationed in Bahrain.

This gives the Bahraini government a certain immunity and lack of international scrutiny compared to Syria and Egypt for example.

Q: The media coverage as you say has been sparing compared to other Arab countries but are there other factors at play?

A: I am not political. I am a doctor who just treats injured patients.

Unfortunately, the government saw me as part of a movement trying to make its corrupt regime accountable and imprisoned me briefly.

They are portraying the struggle in sectarian terms to keep themselves in power.

Yet they forget that this peaceful uprising is made up of a coalition of Sunni and Shia activists.

Q: What is the next step in resolving this impasse?

A: The government needs to get into a genuine dialogue with activists and fulfil the people's demands for transparency.

I do not want to continue the revolution for the sake of revolution but we will maintain our peaceful activities in the face of tyranny.

Q: Mr. Matar, you were part of the Bahraini parliament, briefly tell us how you became involved with other activists?

A: I was a member of the Bahraini parliament as part of the Al Wafaq Bloc which is the largest opposition with nearly 45 per cent of the national vote.

I was the youngest MP and was elected towards the end of 2010 and held prominent roles such as being on the Treasury Committee.

When the Arab Spring started, our party resigned in opposition to the increasing corruption of the Khalifa controlled government and we stayed in contact with human rights organisations on the ground to document cases of torture.

Q: What have you undergone in the past year with your political activities?

I spent 45 days of that period in solitary confinement, underground without any light and no-one from my family knew.

It happened so quickly I was kidnapped by plain-clothes police or thugs dressed in civilian clothes while I was walking.

Q: What is the situation on the ground at the moment?

You know the latest victim was a 22-year-old citizen photojournalist who passed away last week after being sprayed by bullets.

Q: What is your hope for the future of Bahrain?

A: We are confident that this government will be toppled eventually.

The US & the West can choose to believe Bahraini propaganda and their hollow slogans of reform or actually move to truly support democratic change.