Evacuees from the Diamond Princess Cruise ship will be quarantined for 14 days in Darwin upon return, amid concerns some passengers could be carrying the coronavirus. 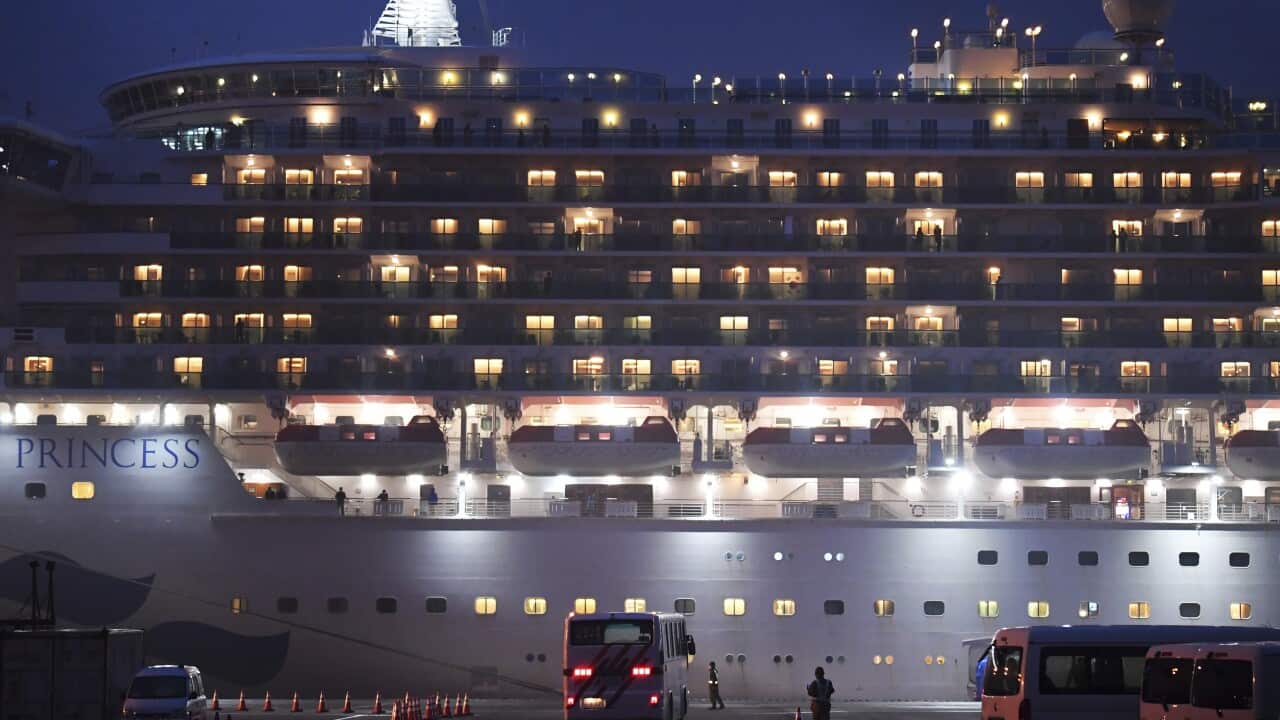 A Qantas flight from Japan on Wednesday will retrieve the Australians stranded on the Diamond Princess ship since 3 February. Source: AAP

After 16 days locked down on the Carnival Corp cruise ship in Japan's Yokohama Port, around 200 Australian passengers will finally return home.

A Qantas flight from Japan on Wednesday will retrieve the Australians stranded on the Diamond Princess ship since 3 February, as a result of a passenger being diagnosed with the infectious coronavirus.

Prime Minister Scott Morrison announced the plan on Monday, making it clear while the passengers will be travelling back to Australia, they won't be allowed to go home as they will need to be quarantined for an additional 14 days at Darwin's Howard Springs Facility.

Advertisement
A passengers is seen on a balcony of the Diamond Princess cruise ship. Source: Getty

"We are very concerned for your welfare and the best thing we can do to help you is to bring you home - so we're going to bring you home and ensure you are cared for on your return and through that quarantine period," he said.

"We want to get you home to your family and your friends as quickly as we possibly can with the best care possible and to ensure at the same time we preserve and maintain the strong mechanisms and arrangements we have put in place to protect the broader health of Australians in response to the coronavirus."

Since the quarantine period began, the number of cases of COVID-19 on the ship has risen to 454, including 24 Australians.

On Monday, there were 99 new confirmed cases, statistics which Chief Health Brendan Murphy said showed transmission is ongoing and therefore quarantining is necessary.

An ambulance leaves a port where the quarantined Diamond Princess cruise ship is docked Source: AP

"The Australians who have been quarantined over the last 12 days, many of them have done everything that they have been asked to do and they are probably wondering why we are imposing this extra requirement," he said.

"We are not quite sure why there have been ongoing infections, but given that there have been recent cases, we cannot be absolutely sure that any of the currently well people on the ship who are coming home on Wednesday are not carrying the virus."

The government stressed the decision was made on the advice of medical professionals and with the health of Australians already in Australia at the forefront, as Health Minister Greg Hunt explained.

"Within Australia, the actions that we have taken have helped contain the virus so far, we remain at 15 confirmed cases in Australia, eight of which have cleared the virus, two of which are in recovery phase, and so as a consequence, we have been able to provide reassurance and safety at home," he said.

"Two-hundred-and-forty-two passengers who came as part of the first relief flight from Wuhan are leaving Christmas Island today to return home, and that is a welcome case study of what we are seeking to do with the passengers from the Diamond Princess."

'We can see the end here'

The news of an additional 14 day quarantine period has not been warmly welcomed by all on board the cruise, with many eager to get home and back to normal life after over two weeks locked in their cabin rooms.

Australian's Aun Na Tan and her family on board. Source: Supplied

"We can see the end here and to now have to restart that at a location away from our home is not something we're look forward to and we feel it is a waste of government resources and a slap to the face to all the Princess cruises, the crew, the Japanese government and all the volunteers that have spent their time trying to keep us safe and put us through this quarantine here," she said.

"We've kept to ourselves, we've made sure we've followed all the rules of quarantine, we've showed no symptoms, our temperatures have been fine so we're just going through the final step which is to be sampled and wait to see if our test results come up negative and then we're done."

'The same step has been taken by the US'

Professor Brendan Murphy has however stressed the additional quarantining is not just an Australian government initiative, but one governments from around the world with passengers on board are also implementing.

"The same step has been taken by the US, bringing their people from the ship home, the Canadians are planning to do the same thing with the people they are bringing home, and other countries have indicated that if they bring their citizens home they will also require a 14 day quarantine period, it is best to be safe to protect our community," he said.

Foreign Affairs Minister Marise Payne has thanked the Japanese government for their diplomatic assistance in returning Australian passengers and their handling of the situation.

"I also want to commend the efforts of the government of Japan and of the cruise operator, Carnival, to manage what has been a very clearly challenging situation with quarantine of more than 3000 passengers and crew on-board the Diamond Princess,” she said.