A Gold Coast mother has spoken out in favour of immunisation after she refused a vaccination and then infected her newborn daughter with whooping cough. 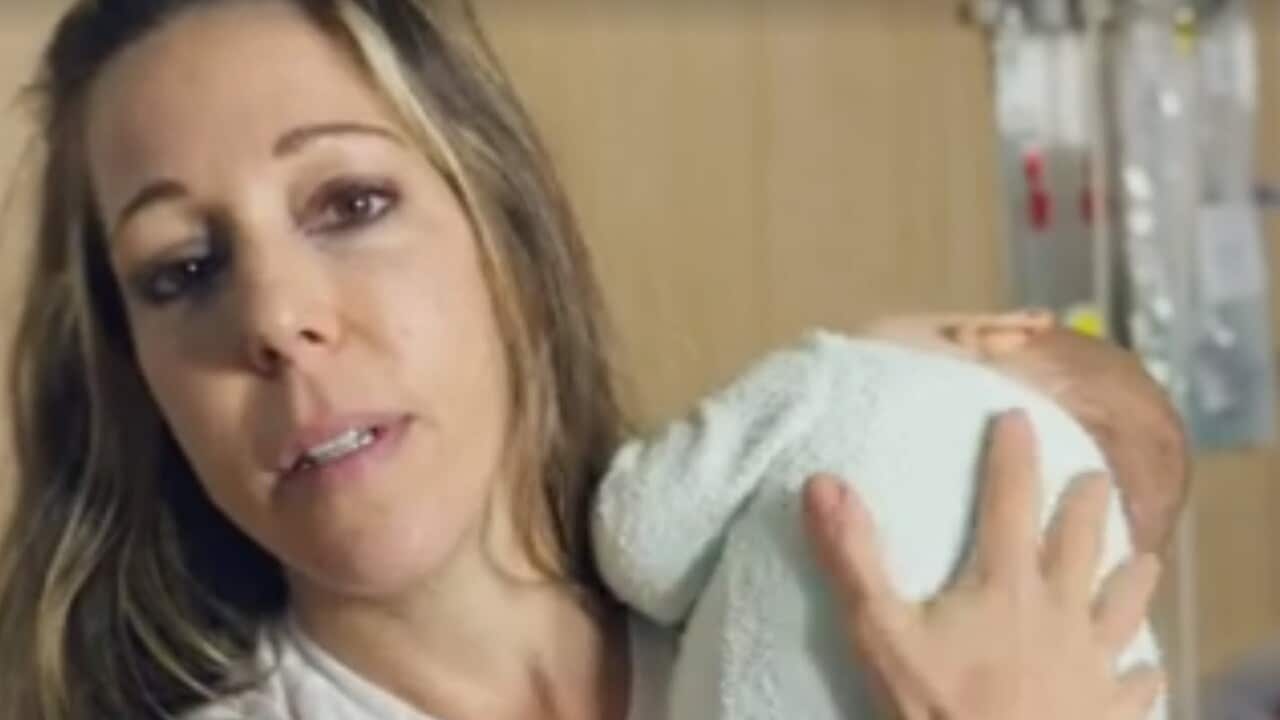 A Queensland mother who refused the whooping cough vaccine while she was pregnant has shared the story of her newborn baby's struggle with the disease.

The Gold Coast woman, Cormit, shared her story through a Gold Coast Health Facebook video and spoke about how she refused to have the free whooping cough vaccine at 28 weeks of pregnancy.

"Being the healthy, fit, organic woman that I am I said ‘Leave me alone, I don’t need this crap’," Cormit said in the video.

Advertisement
"I’ve been a very healthy pregnant woman – no problems, no complications, worked, worked out, went to the gym every day, ate healthy, had no deficiencies, had a natural birth and somehow through the last two weeks of my pregnancy I’ve managed to get whooping cough."

Cormit said her daughter Eva caught whooping cough, also known as pertussis, from her. The child's symptoms, though mild at first, quickly intensified.

"Within two weeks the cough became pretty scary – horror movie, coughing to the point of turning blue, flopping in my hands, can’t breathe, running into hospital," she said.

"If I could turn back time I would protect myself, that’s my message.”

"It ended up being upstairs in intensive care with a baby that coughs and coughs and coughs and it’s just so hard to watch your little tiny little thing and she’s all red and from red they go blue and sometimes they go a bit black and for a moment you think they’re dead in your hands, they flop.

"A lot of suffering for a little tiny little cute thing that you love so much."

Cormit said she had now been in a Gold Coast hospital for three and a half weeks, "and every hour I’ve got to stay here, watch her going blue, give her oxygen, watch her cry, watch her having a hard time eating".

"She’s my only child, she’s my first and if I could turn back time I would protect myself, that’s my message,” she said.

Whooping cough is a highly infectious disease which is spread through the air by coughing or sneezing, or from close personal contact with an infected person.

In Feburary, Gold Coast Health
reported
there had been a surge in whooping cough cases, of which more than 20 per cent were young children.

“We are starting to see a resurgence in cases on the Gold Coast and right across south east Queensland, particularly in children under the age of five, which is quite disturbing,” Dr Buynder told 91.7 ABC Gold Coast in February.

The federal government says the whooping cough vaccine - for pregnant women, babies and children - was the best way to reduce the risk of people, particularly children getting the disease.

Booster vaccines are
also recommended
for those who are going to have close contact with babies.

The government's
immunisation website
says the disease "can last for several months and can be particularly dangerous for babies under the age of 12 months".

Related reading
'I got very misled by this subculture': Why do people cling onto myths about vaccines?

"However, it remains a highly infectious and dangerous disease. In a household where someone has whooping cough, an estimated 80 to 90 per cent of the unimmunised contacts of that person will acquire the disease."

Symptoms can take seven to 20 days to appear after infection and initially present like a cold until the characteristic cough begins.

The cough can last for months and can lead to sleep disturbance and weight loss, while unvaccinated people can suffer severe consequences including pneumonia and hypoxic encephalopathy, which is a lack of oxygen to the brain.