Exclusive: Top clubs boss Peter Newell is facing calls to resign after a damning investigation finds his Wollongong club used alcohol and cash advances disguised as purchases of up to $40,000 to lure in gamblers. 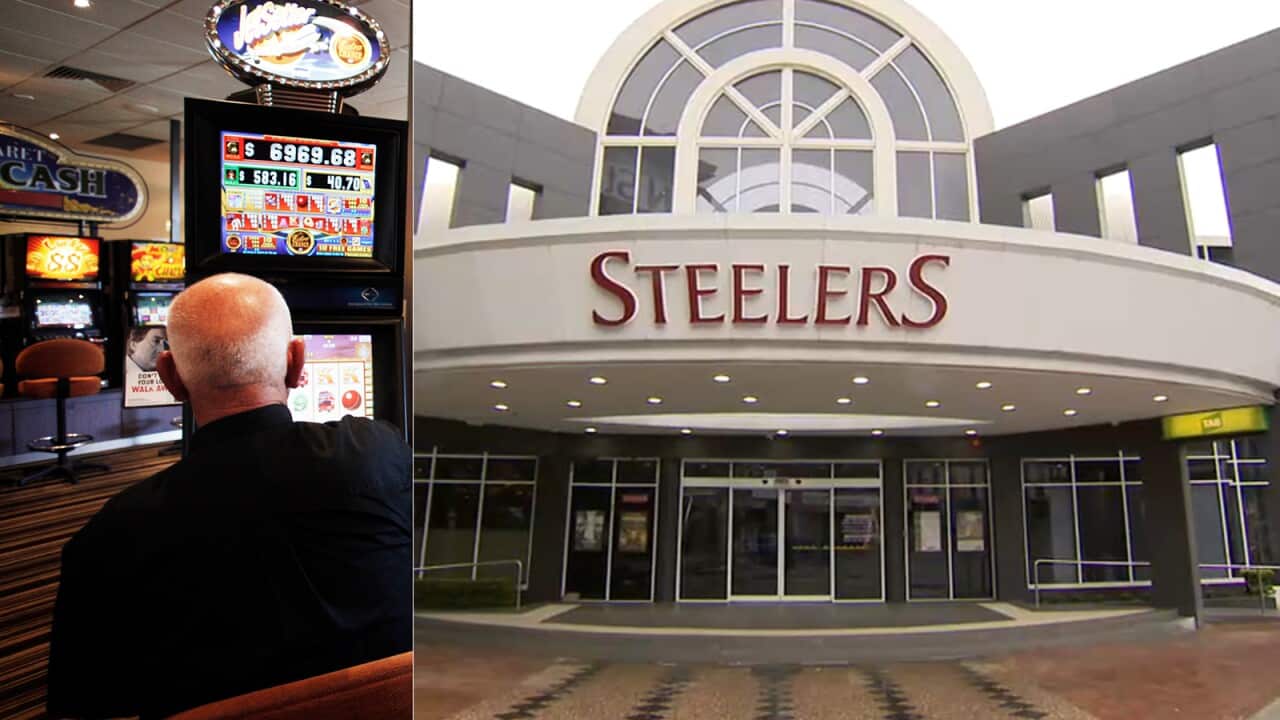 Steelers in Wollongong, right, has been fined $100,000. Source: AAP, Supplied

A pokies venue headed by Australia’s top clubs boss used free alcohol and large cash advances disguised as purchases to induce gamblers to spend more, according to damning findings by the independent regulator.

Clubs Australia president Peter Newell, who is also the chairman of influential industry group Clubs NSW, chairs the Illawarra District Rugby League Club, or Steelers, which has been fined $100,000, plus almost $30,000 in costs.

SBS News can also reveal the disciplinary penalty is the largest fine issued to a registered club since the NSW Independent Liquor and Gaming Authority was established a decade ago.

Scott Miles, Steelers’ former club secretary and general manager, who it was found directed staff to undertake the offences to "make sure people are coming in the doors", has also been given the industry's first lifetime ban from any officeholder role.

The Authority's found the the conduct by of senior staff, led by Mr Miles, was a "serious" and "systemic" contravention of rules limiting the harms of gambling.

"There are financial benefits and consumer harms posed by unlawfully incentivising gamblers and obscuring credit transactions," it said.

The record sanction from NSW’s Independent Liquor and Gaming Authority,
published this week
, follows what Mr Newell has described as a “tumultuous year” for the venue in Wollongong, a regional city south of Sydney.

In December, Mr Miles was sentenced to up to four years in prison for defrauding the club of more than $1 million over a seven-year period - to feed his own gambling addiction.

Although the Authority accepted there was not evidence the board directors, including Mr Newell, were aware of the breaches involving gambling inducements for punters, it found the club - not just Mr Miles - was culpable for them.

“While the unlawful conduct was instigated by Mr Miles, it occurred over a substantial period of time and involved large sums of money,” it said.

“It included the cooperation of managerial staff, several of whom clearly knew these practices to be wrong but acquiesced”.

Staff described running through “false EFTPOS transactions disguised as legitimate sales” for amounts ranging up to $40,000 so punters could access more cash to pump through the club’s pokies.

“It started a long, long time ago with some of our Asian clientele,” doorman James Summerrell told inspectors, adding that he was urged on by Mr Miles because “we can’t afford to lose this kind of patron, we need to keep doing what we’re doing”.

“Mr Summerrell stated that some patrons would come up and ask for ‘$5,000 on purchase’ between ‘four or five times a night’ with that money being used for ‘poker machines’”, the report said.

Supervisor Simon Reay said the disguised transactions, which breached liquor laws, were intended to circumvent the club’s cash-out policy. “If a customer hit a daily limit on their personal card, it was told upon us to ring it up as a purchase,” he said.

Duty manager Graham Crittenden told inspectors he raised the issue with the general manager “numerous times” but was told the club needed to meet its targets. “And if we didn’t the doors were shut and fifty people would be out of a job,” Mr Crittenden said.

The same rationale was cited when offering patrons free drinks to encourage them to gamble.

Mr Miles, who blamed the culture of the club for the cash advances, also denied instructing staff to provide free alcohol. He characterised the practice was a goodwill gesture that evolved over time and "kept creeping back" if any efforts were made to stop it.

The club’s then-acting general manager Luke Barker told inspectors: “It just got to the point, look, if they, if they wanted it and they were playing the gaming machines you were to provide it”.

There are 2,522 poker machines in Wollongong’s 37 registered clubs, where players lost more than $70 million in the six months to May 31 this year.

Wollongong problem gambler Veronica*, who has not gambled in three months, said free food and drink were a typical trick used by venues to get you to stay at a machine.

“It’s all about welcoming,” she said. “Do you want a coffee? They bring it to you at the pokie machine. Snacks [too].”

READ MORE
'I tried to join an RSL club ... then I asked a difficult question'

'Asleep at the wheel'

The club, which noted it suffered financial loss and reputational damage as a result of Mr Miles’ $1 million fraud, asked the Authority to “exercise clemency” by not imposing a penalty, which would be "extremely detrimental" to its viability.

In its submission to the Authority, Steelers said it relied on Mr Miles to properly run the club, and that all reasonable and appropriate steps had since been taken to avoid a recurrence of the breaches - including a new whistleblower policy.

The Authority, which ordered the club to submit this policy for review, said a substantial penalty was required to act as a deterrence and “reflects the seriousness of the contravention”.

“People who run clubs must act with the highest integrity and put the interests of their members first,” Mr Toole said.

Alliance for Gambling Reform spokesman Stephen Mayne said called for Mr Newell to resign, saying the longtime Steelers chairman and his fellow board directors had been “asleep at the wheel”.

“This is a staggering report,” Mr Mayne said. “These are extraordinarily bad practices that were going on for many, many years at the Wollongong club where the chairman also happened to be the long term chairman of both Clubs NSW and Clubs Australia – the powerful lobby groups representing pokies clubs across the country.”

“Governance and the oversight and the stewardship was completely absent.”

Steelers said Mr Newell and the club’s current general manager were not available for comment. Clubs NSW declined to comment.

Do you know more? Email
leesha.mckenny@sbs.com.au