Refugee advocacy groups have reacted to the leaked findings of a ‘secret’ government report reviewing resettlement programs for humanitarian migrants in Australia with mixed emotions. 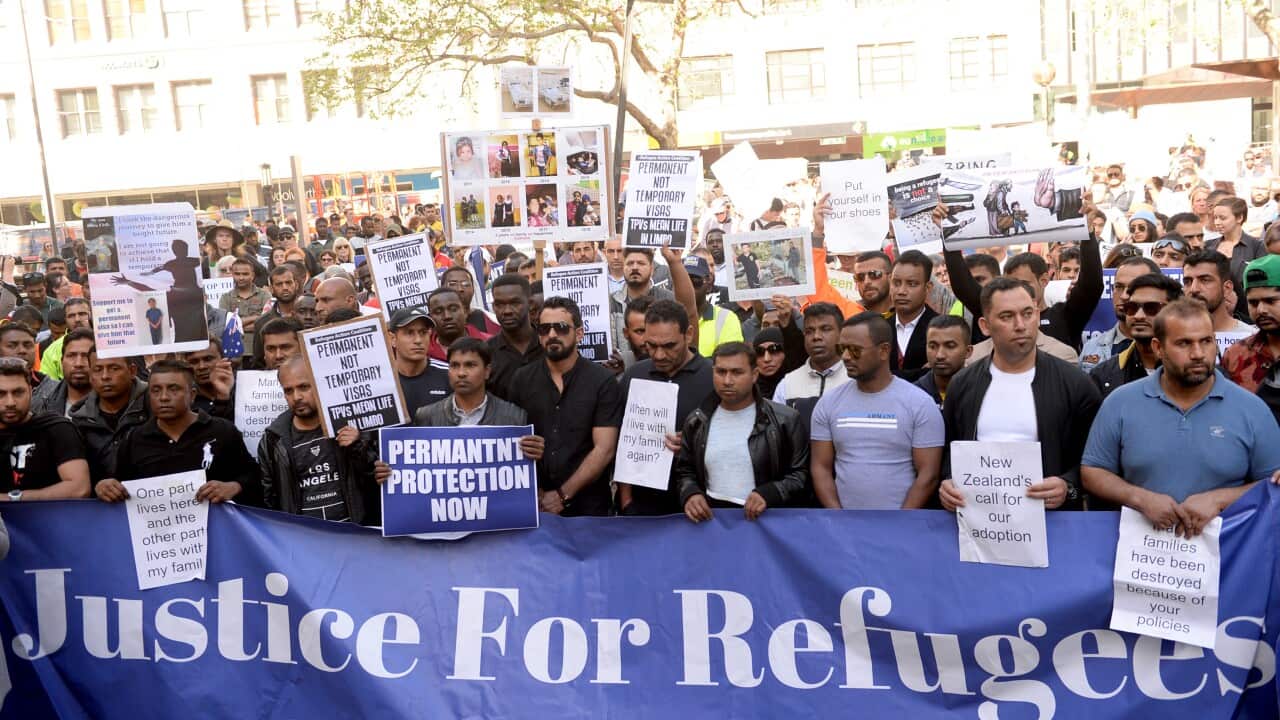 Refugee support groups are urging the Morrison government to heed the findings of a ‘secret’ government report on resettlement programs for humanitarian migrants in Australia.

The major review exploring refugee resettlement has been kept under wraps since being commissioned last year with the Federal government refusing to release it.

SBS News has not seen the report – but leaked details in the Sydney Morning Herald have detailed its calls to create a “more positive narrative” around refugees.

Advertisement
The government has reportedly sat on the report led by former top bureaucrat Peter Shergold since February refusing Freedom of Information requests to make it public.

The Asylum Seeker Resource Centre’s Anastasia Magriplis, Director of Advocacy and Campaigns, told SBS News she is “deeply concerned” the report has not been disclosed to this point.

“This problem is not going to go away and we really ask the government to just be respectful and responsible with this information, they've commissioned this report they need to release it,” she said.

“It is just not fair when we are talking about people who already have gone through so much trauma and so many terrible situations to actually have to again be a pawn in a political game.”

The Federal government announced the inquiry into the “integration, employment and resettlement” of refugees and humanitarian migrants in December last year.

At the time Prime Minister Scott Morrison said the review aimed to: “better ensure refugees and humanitarian entrants can make valuable contributions to our society and our economy.”

But revealed details also warn against a shift towards selecting refugees based on their perceived work-ready-merit rather than on humanitarian grounds, citing sources connected with the review.

“The general feeling in the community is that these people are congestion causing… [and] causing all sorts of problems for the real Australians, which is a really toxic narrative,” Ms Magriplis said.

“This does impact people who apply for a job, if you come from an emerging community that has arrived in Australia as a refugee immediately you're placed at a disadvantage.”

Refugee Council of Australia CEO Paul Power told SBS News the humanitarian basis of refugee resettlement is a central tenant of the program that must remain.

“The need for the refugee and humanitarian program to focus on those in greatest need of resettlement, I think is absolutely critical,” he said.

“The national rhetoric ... about Australia's involvement really does play a factor in the way in which refugees are received and the opportunities that recently arrived refugees are given in the employment market.”

According to the leaked findings, the report calls for more government funding to better support refugees and their families and enabled services to work together in central locations.

It allegedly criticises the way settlement services for refugees are being co-ordinated.

“One of the greatest challenges for newly arrived refugees is making that first break into the permanent full time workforce,” he said.

“There are so many people who on paper when they arrive in Australia would not have been regarded as having high employment skills, [but] have gone on to achieve great things in their life.”

The Morrison government is attempting to push for the resettlement of more migrants and refugees in regional areas, including encouraging employment opportunities in those areas.

“The funding is particularly becoming an issue for regional areas, with the government's emphasis on increasing settlement in rural and regional areas.” she said.

“There is a great need to make sure that those services are in place.”

READ MORE
OPINION: I am a Tamil asylum seeker in Australia. I don’t hold hope

The leaked findings of the report suggest the review supports a placed-based approach to establishing refugee services, where these are together located in central locations.

“It is important that people … who have faced some real difficulties and trauma in their life … are well supported and ... they don't have to sell their story to a range a different services providers.”

While not wanting to preempt the findings of the review Ms Wolffs said it would have ‘big implications’ for the sector.

For Ms Magriplis the stakes of improving outcomes are high - describing the sector as "extremely underfunded” and “under-resourced”.

“We do have a responsibility as a nation ... to help them to be full and thriving members of our community.”

“I think it would actually contribute to the national discussion to how to make refugee settlement in Australia more effective for all concerned,” he said.