Three-year-old Tharnicaa had reportedly been unwell for days before she was flown to a hospital in Perth on Monday afternoon. 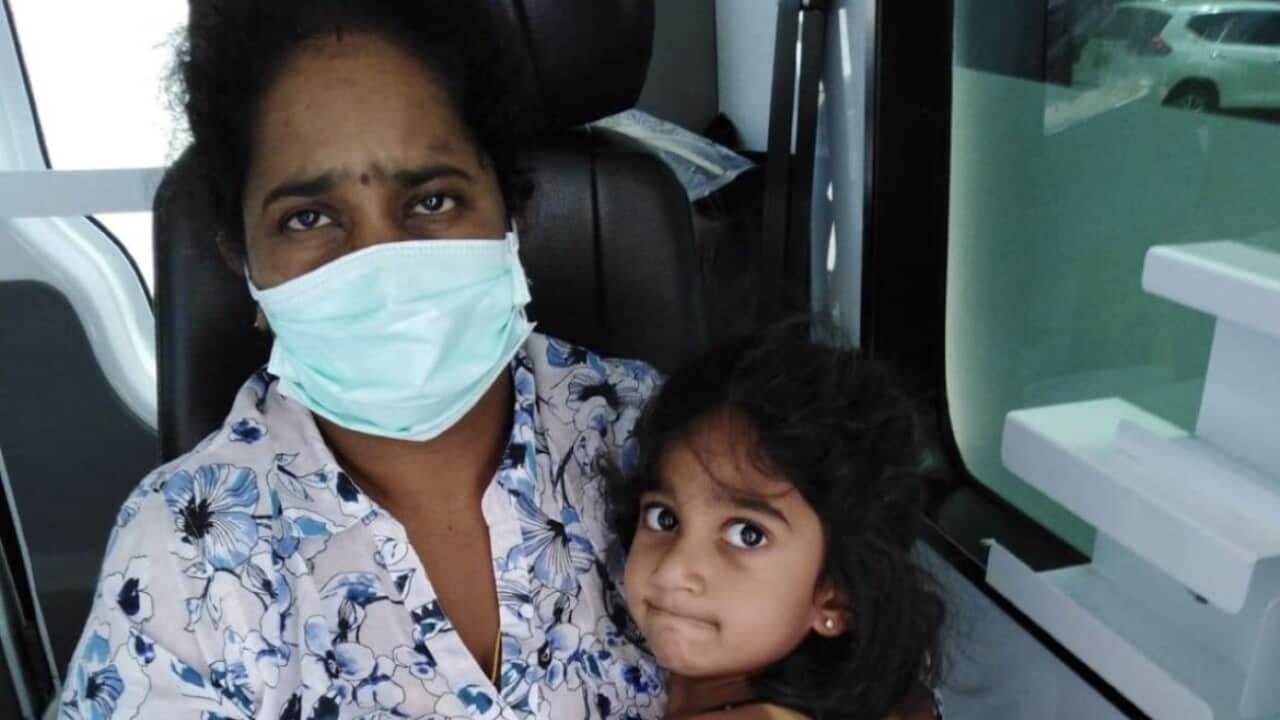 Tharnicaa has been transferred to Perth for medical treatment. Her mother, Priya, has travelled with her. Source: Rebekah Holt

Three-year-old Tharnicaa and her mother Priya Murugappan were evacuated from the island on Monday evening, and the child suffered dangerous temperature spikes on the journey to Perth.

Her mother says the girl was sick for almost two weeks, and that repeated requests for early hospital care were refused.

Advertisement
Family supporter Angela Fredericks said the child has been diagnosed with a blood infection, resulting from "untreated pneumonia".

She says the child is now stable, in the Perth Children's Hospital, and is not in immediate danger.

"It looks like they have said she has untreated pneumonia that led to a blood infection," Ms Fredericks told AAP on Tuesday.

"They are continuing to run tests, as they are still not able to get her white cell counts where they should be. She is hooked up to antibiotics ... they are now treating the pneumonia, while they look for any other infection sites."

Tharnicaa, three, is the youngest person in Australia's immigration detention system and one of only two children, the other being her five-year-old sister Kopika.

She has been detained on Christmas Island with her sister and parents, Priya and Nades Murugappan, since August 2019 after an urgent court injunction blocked their deportation to Sri Lanka.

Tharnicaa (right) in hospital on Christmas Island with her sister, Kopika, before being medically evacuated to Australia. Source: Supplied

Family friend Bronwyn Dendle told SBS News Tharnicaa was flown out of Christmas Island to a hospital in Perth on Monday afternoon after being unwell with high temperatures, vomiting, and diarrhoea, since 25 May.

She was first taken to hospital on the island in the early hours of Sunday morning, she said.

A statement published by the Home to Bilo campaign, a group of friends and supporters who advocate for the family, said health services on the remote island had only administered Panadol and Nurofen when Priya raised the alarm about her daughter's condition.

"I am feeling very scared and worried for my little girl," Priya said in the statement. "She has been sick for many days, it took a long time for her to get to the hospital."

Priya has travelled with her daughter to Perth, but her father was forced to remain on the island.

"I know that Nades is very worried and very upset about everything," Ms Dendle, who has been in contact with the family, said.

The family have been in immigration detention for more than three years. After overstaying their visa, they were taken from their home in the small Queensland town of Biloela on 5 March, 2018, and placed in Melbourne’s Immigration Transit Accommodation (MITA) before later being transferred to Christmas Island.

"Tharnicaa would have been able to access timely and appropriate medical care if she was living here in Biloela," Ms Dendle said.

"And now we've got a case where a child is seriously ill and being flown to a major children's hospital ... as a mother, my heart breaks into a thousand pieces having to watch your child be that ill."

A friend of the family, Angela Fredericks, said medical staff are still running tests to confirm whether the "blood infection" is sepsis.

"Late last night, they were starting to run some tests, they were treating her intravenously with antibiotics," she told ABC RN on Tuesday morning.

"And still trying to get her fever down, which spiked during her flight over again.

"So last night, when I spoke to them they had been settled into the emergency department and were waiting."

Labor's home affairs spokesperson Kristina Keneally, who recently visited the family on Christmas Island, said she was concerned for Tharnicaa.

"A medical emergency and family separation is the last thing they need," she said. "This family should not be in detention.  They should be in their community in Biloela."

Greens senator Nick McKim called for the family's release into the community.

"Horrendous. A small child imprisoned for political gain," he said in a message posted on Twitter.

"They shouldn’t even be in detention in the first place, let alone so far away from decent medical support. They should be released into our community. Now."

In a statement on Tuesday morning, the Department of Home Affairs strongly denied allegations of inaction or mistreatment.

"All of the Australian Border Force’s actions and decisions regarding the minor’s medical treatment and care have been based on medical practitioner’s clinical knowledge which is ongoing," the statement said.

"The minor has been receiving medical treatment and daily monitoring on Christmas Island consistent with medical advice. This has included an IHMS General Practitioner and the Christmas Island Hospital."

Home Affairs Minister Karen Andrews said "a range of resettlement options" are being considered for the family.

She said no final decision has been made on "resettlement options", but she ruled out using her discretion at this stage as Home Affairs Minister to grant them a valid visa.

"We are going through the process now of investigating a range of resettlement options in relation to a number of different circumstances here in Australia. I can't make public commentary on that at the moment because I don't want to disrupt those negotiations."

Prime Minister Scott Morrison said decisions on the treatment of the family would be made by medical professionals.

"This is a matter going through the court's process that they've initiated and there are some present medical issues involving the family.

In 2019,
four of Tharnicaa's teeth were surgically removed due to severe decay
, which advocates believe was caused by a lack of fresh food and vitamin D deficiency brought on by life in detention.

A Department of Home Affairs spokesperson confirmed a minor had been medically evacuated from Christmas Island to a Western Australian hospital but declined to comment further on the incident citing privacy reasons.

"Healthcare services for detainees on Christmas Island are broadly comparable with those available within the Australian community under the Australian public health system," they said.

"The Australian Border Force facilitates access to nurses, doctors and specialists for all members of the family."

A protracted legal battle to secure the family's right to remain in Australia currently hinges on whether the three-year-old has the right to apply for protection.

In February, the
full bench of the federal court upheld an earlier ruling
that found
Tharnicaa was not given procedural fairness
when her application for a protection visa was assessed.