Republicans go on the attack in feisty US presidential debate

The hopefuls for the Republican presidential nomination are squaring up against each other again and the more experienced politicians among them are attempting to turn the tide against candidate Donald Trump. 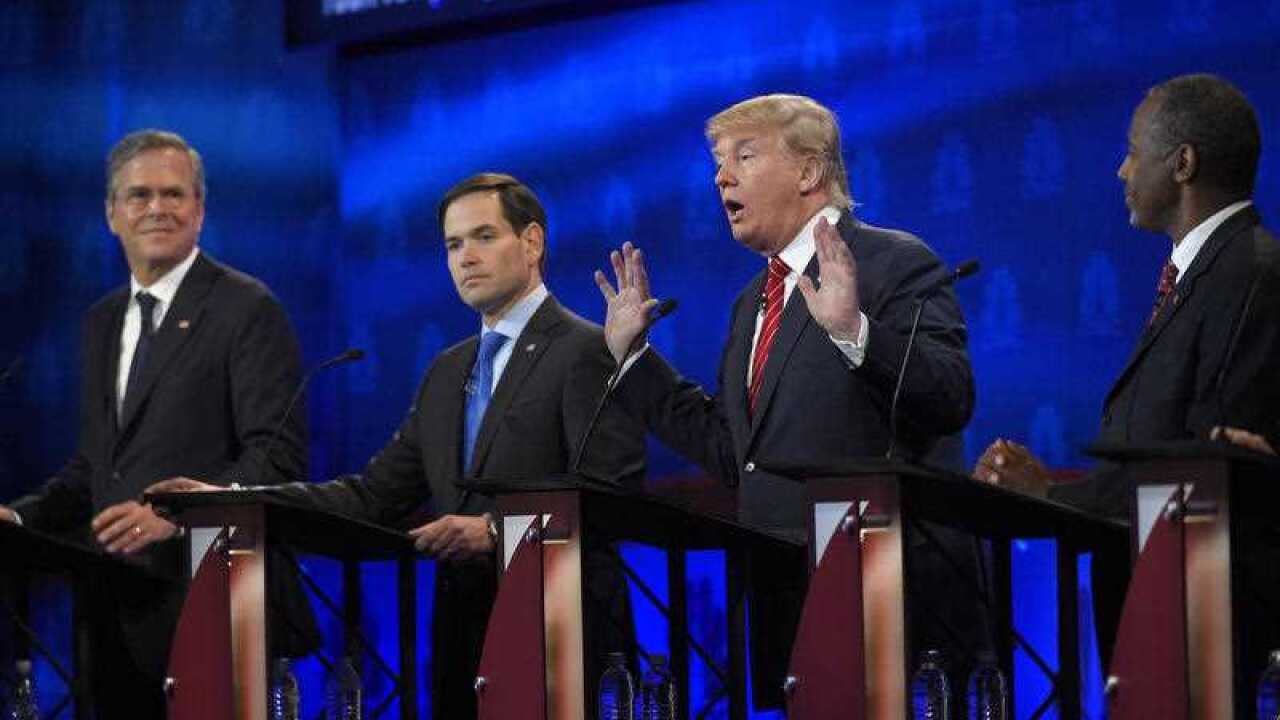 With time running short until the first nominating contest in three months, the 10 Republicans in the evening's main debate were anxious to stand out, and several were quick to leap to the attack. The candidates frequently talked over each other and the moderators in their haste to make points.

Rubio, a U.S. senator from Florida, defended his record of missing about one-third of his Senate votes this year while campaigning for the White House and said a Florida newspaper's call for him to resign was evidence of media bias.

Advertisement
Bush, a former Florida governor who was once considered a mentor to Rubio, was not buying the explanation.

"Just resign and let someone else take the job," Bush said. "This is a six-year term, and you should be showing up to work. Was this a French work week?"

Carson, a retired neurosurgeon, said his plan, which is based on religious tithing principles, would get rid of deductions and loopholes and constitute a flat rate of about 15 percent that would be sufficient to fund a sharply reduced government.

"Remember, we have 645 federal agencies and sub-agencies. Anybody who tells me that we need every penny in every one of those is in a fantasy world," Carson said.

Fiorina, a former executive at Hewlett-Packard, said she would reduce the tax code to three pages to level the playing field for all Americans.

"Three pages is about the maximum a single business owner, or a farmer, or just a couple can understand without hiring somebody," she said.

Ohio Governor John Kasich was quick to go on the attack against billionaire developer Donald Trump, calling his tax plan "a fantasy."

"We are on the verge of picking, perhaps, someone who cannot do this job," Kasich said. "You gotta pick somebody who has experience."

The debate came at a crucial time in the race for the Republican presidential nomination, as Carson has moved ahead of Trump in some national and local polls. The latest Reuters/Ipsos poll shows the two front-runners in a dead heat.

Lagging contenders such as Bush and Rubio are running out of time to turn the tide in a campaign dominated by provocative rhetoric that has played to the strengths of Trump, a bombastic reality television star and developer, and the soft-spoken Carson.

While the Republicans were quick to criticize each other, they agreed on one thing: their distaste for the media.

"The Democrats have the ultimate Super PAC. They're called the mainstream media," Rubio said.

U.S. Senator Ted Cruz of Texas ignored a question on the debt limit to criticize the CNBC debate moderators for the questions they had posed to candidates.

"The questions that have been asked so far in this debate illustrate why the American people don't trust the media," he said. "This is not a cage match. How about talking about the substantive issues?"

All of the low-polling candidates took shots at Democratic front-runner Hillary Clinton and her rival U.S. Senator Bernie Sanders, a democratic socialist from Vermont, but Graham had the sharpest aim.

"Good God, look who we're running against," Graham said. "The number-one candidate on the other side thought she was flat broke after her and her husband were in the White House for eight years. The number-two guy went to the Soviet Union on his honeymoon, and I don't think he ever came back."