One year after same sex marriage legislation passed federal parliament, SBS News visits three businesses that were hoping the reform would be good for their bottom line. 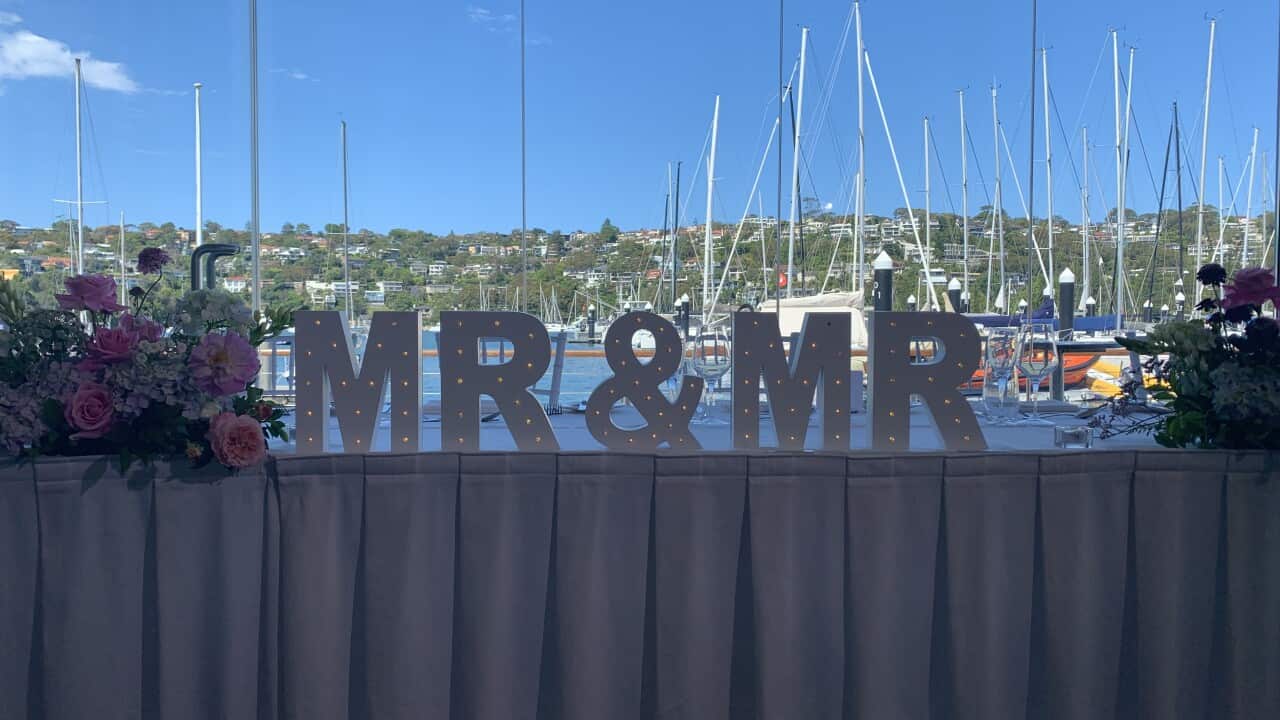 After leading the campaign for marriage equality for a decade, Independent MP Alex Greenwich witnessed the same sex marriage debate reach its climatic end from the stalls above the floor of the House of Representatives in Canberra.

"I was in federal parliament watching as the vote debate was occurring and the vote happened and it was quite an overwhelming experience.

So many people had spent so long advocating for marriage equality and it was finally getting done, it was quite an overwhelming feeling of joy, but also of relief because now the campaign was behind us, and couples could finally get married."

"Since the marriage equality legislation passed the parliament, something like 5,500 same sex couple have got married, that's more than 100 each week. What a wonderful celebration of love and happiness has really occurred all year long."

He says, small businesses, have also been winners.

"The average cost of a wedding in Australia is $20,000. You do the math. That's a huge contribution for the small business sector," Mr Greenwich said.

Marriage celebrant Melissa Soncini has presided over 120 ceremonies this year.

"I have seen an increase of about 20 per cent in the numbers of weddings I am doing, and that's thanks to same sex marriage laws being passed and I know those numbers will increase as the years progress," Ms Soncini said.

So far she's conducted 19 same sex weddings, but she is expecting a lot more.

"It takes a lot of time to plan a wedding, and I'm seeing more and more inquiries through for next year, and the year after, because to get a good venue it takes about two years to get the date that you want on a Saturday."

"I've been contacted by couples living in Singapore, Hong Kong, Philippines and Korea thus far. So in the last three months they have all come to Sydney, had their lovely ceremony on the harbour with family and friends which flew in and basically were here to celebrate their wedding."

"Given that the bill has passed through, it really has shot through and made couples more excited about planning their weddings. I have almost half the calendar already booked for next year and already have 2020 bookings already coming in."

He's become so busy, he had to get some help.

"I have employed three more photographers on a contract basis just to assist with double bookings as well as larger weddings that require an extra photographer on the day."

"There was a lot of growth within the business, and it got large where it got to a point where I was unable to kind of solely do everything myself, so we had to expand and I was calling out for collaboration," Ms Abraham said.

She's still the head chef, but collaborated with a colleague Fabio Funai who has taken an ownership stake in the business.

"I look after all the operation, front of house of the business, since there was significant growth, we needed to expand," Mr Funai said.

Despite the landmark legislation, marriage celebrant Melissa Soncini adds that there's still some work to do for complete acceptance.

"I have done weddings also that are a little bit private because couples are afraid of being looked at by the public... stared at, which is a bit of a shame.

"But at the moment there still is a stigma about two men or two women kissing in public and I'm not sure why that is, there shouldn't be.

"Marriage is marriage, and two people in a committed relationship should be able to enjoy and celebrate that with their family and friends."