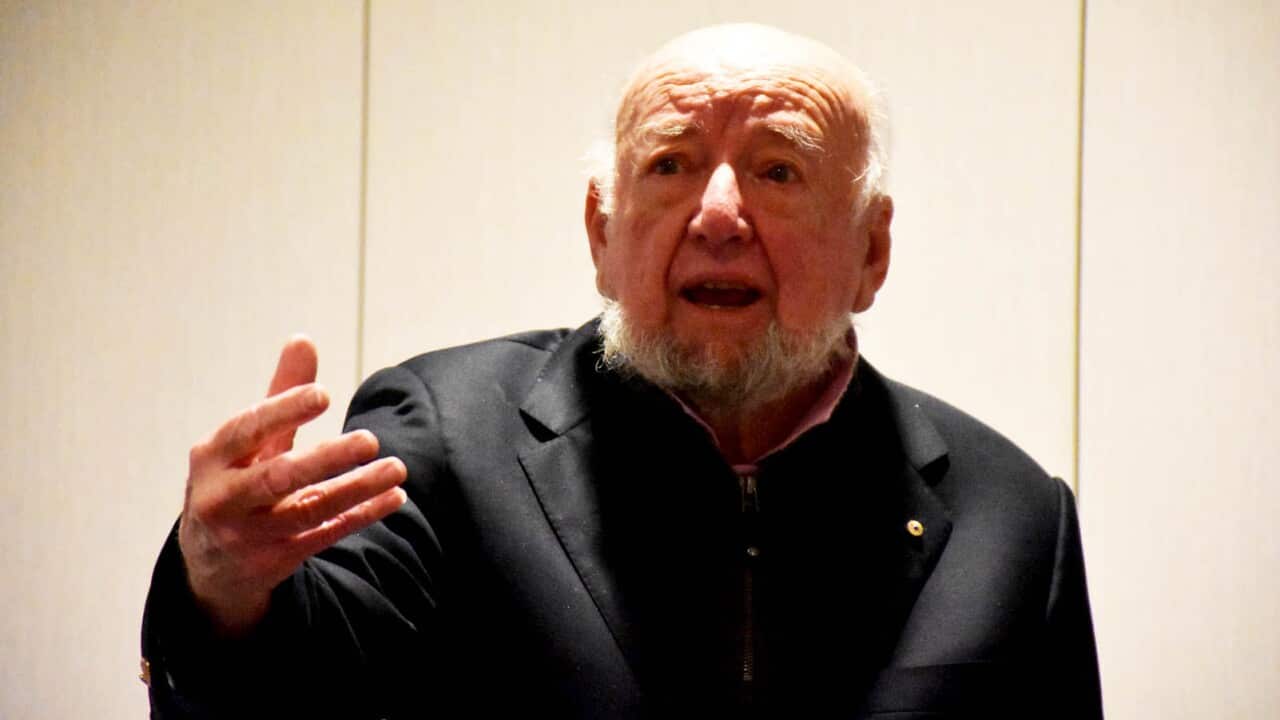 The man who wrote the book Schindler's Ark, which inspired hit film Schindler's List, says the Coalition's asylum seeker policies echo the lead-up to the Holocaust.

Speaking at the Sydney Jewish Museum on Wednesday night, Australian author Thomas Keneally delivered a scathing indictment of the Morrison government and a call to arms for better treatment of asylum seekers globally.

He said Australia was punishing asylum seekers on the islands like they were criminals, even though "they have committed no criminal acts".

While Mr Keneally was very clear he wasn't saying the situation mirrored the Holocaust itself, he said Australia's language and policies toward asylum seekers were similar to the lead-up to what became the Holocaust.

"The rhetoric [around asylum seekers] is all negative ... There's stereotyping ... This idea of locking away people for their own good," he said, "these are early stops on the road to Auschwitz".

"This idea that these people must be punished for their own good, or for the good of people contemplating this journey in Indonesia is something that I don't accept."

Booker Prize-winning author Mr Keneally is best known for his 1982 novel based on the life of Nazi Party member Oskar Schindler, who saved 1,200 Jews during World War II.

Schindler's Ark was later released in the US under the title Schindler's List and adapted into an Academy Award-winning film in 1993.

Mr Keneally has since become an ambassador for the Asylum Seeker Centre and co-authored the book A Country Too Far, an anthology about the asylum seeker experience.

His appearance at Sydney Jewish Museum started with a quote from Mr Keneally projected on a screen reading, "this is the greatest test of our national honour - the way we welcome or punish the asylum seeker".

"The regime of punishment must end and the era of fraternity must begin, and if I can in any way help the transition, I would be honoured."

He told stories about personal interactions with asylum seekers, a lack of global leadership on the issue and the insidiousness of anti-Semitism.

For the past six years, all asylum seekers who came to Australia by boat have either been sent to Manus Island or Nauru.

The Department of Home Affairs responded to questions about Mr Keneally's comments on Thursday.

"Asylum seekers in Papua New Guinea or Nauru are not detained," a spokesperson told SBS News.

"In a press conference on 22 July 2019, Papua New Guinea Prime Minister James Marape confirmed that people are living freely in the community. The same is true of Nauru."

A central point made by Mr Keneally was that Australia faces a "false choice" of either "being tough on borders" or encouraging people smuggling and "letting people die at sea".

"We are told we must be severe to these people to prevent drownings," he said.

The author dismissed the dichotomy and suggested a "third alternative".

He said Australia could "use the money we pay security contractors to send our officials to process people in Indonesia [and] no one needs to catch a boat".

"I think we could process everyone who is likely to take a reckless journey."

The Home Affairs spokesperson said between 2008 and 2013, more than 50,000 people "travelled illegally to Australia on more than 800 individual boat voyages" during which time more than 1,200 people drowned.

"Due to Operation Sovereign Borders, it has been more than five-and-a-half years since the last death at sea resulting from maritime people smuggling to Australia," they said.

Mr Keneally said he believed processing people in Indonesia would be "without hysteria".

"Ordinary Australians have become very uneasy about this. I hope we can work out a solution," he said.

"There are 60 million refugees and just saying 'no' won't cut it."