Prime Minister Scott Morrison has defended the government's policy to criminalise Australians in India who try to return home in breach of a public health emergency declaration. 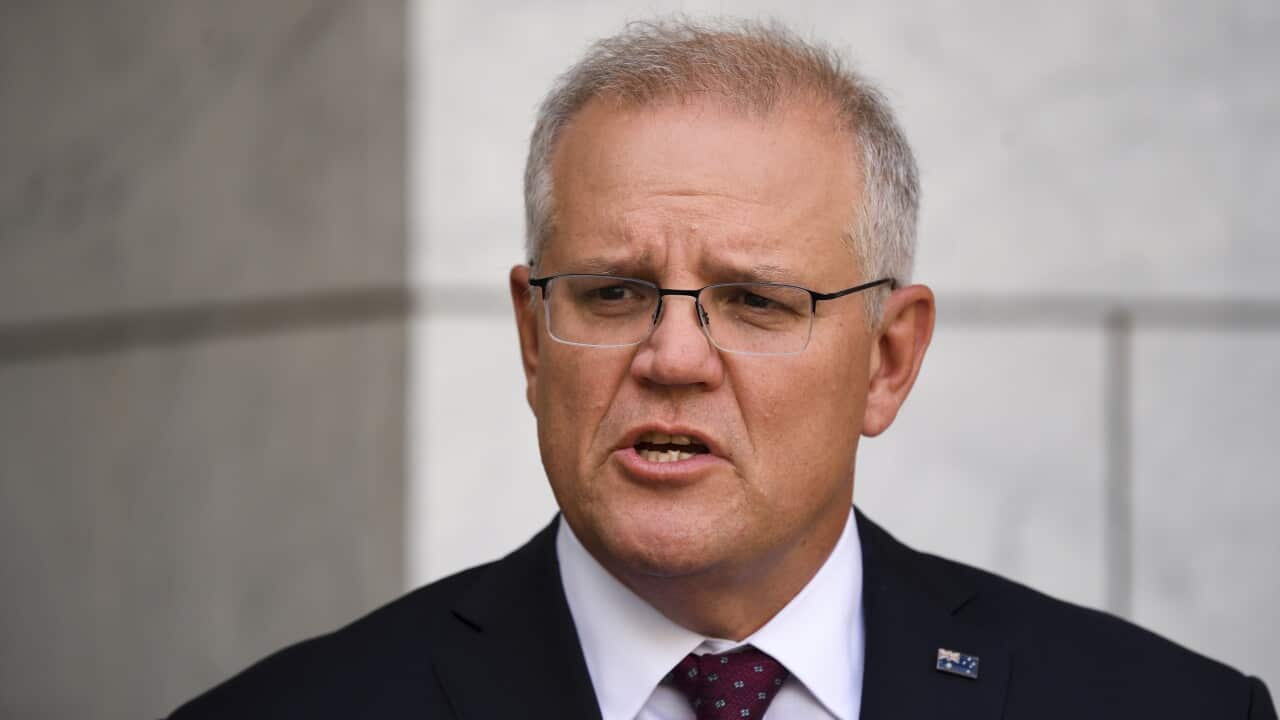 Scott Morrison has declined to commit to a start date for when repatriation flights will resume. Source: AAP

Prime Minister Scott Morrison has denied Australia's travel ban on people returning from India is racist, amid mounting fallout over the government's decision to make it illegal for those stranded abroad to return home.

There has been rising anger in the Indian community and backlash from human rights advocates over the decision to restrict travel from India as the country is ravaged by a mass outbreak of coronavirus infections.

Mr Morrison on Monday defended the response as he addressed the temporary travel ban for the first time since the decision was made late last Friday to criminalise those who try to return home from India.

He had been asked about accusations the policy is racist, which some in the Indian-Australian community have raised concerns about.

"There is a raging pandemic and we need to just continue to take decisions that are in the best health interests of Australia," Mr Morrison told 2GB Radio.

"This is a temporary arrangement – it is being put in place to ensure we don’t get a third wave here in Australia and that our quarantine system can remain strong."

It was revealed last Friday that Australian citizens and residents failing to comply with the emergency determination under the Biosecurity Act could attract a $66,600 fine or a five-year jail term.

The government has put in place the travel restrictions to India until 15 May and promised the measures will be reviewed ahead of this deadline.

But the move to publicly announce Australians trying to return home could face criminal penalties has been widely criticised, with opponents pointing to the fact no travel ban was ever imposed on travellers returning from the United States or United Kingdom travellers at the peak of their outbreaks.

Mr Morrison said the decision to impose the public health order would not be misused by the government.

"I understand the measures have strong sanctions with them – we’ve had the Biosecurity Act in place now for over a year and no one has gone to jail," he said.

"There hasn’t been any irresponsible use of those powers. My heart breaks for the Indian community – but I assure them I am going to restore those repatriation flights."

There are around 9,000 Australians in India currently registered with the Department of Foreign Affairs and Trade as wanting to return home, including about 650 who are classed as vulnerable.

The reasoning behind the travel suspension is to allow a review of Australia's quarantine system to meet the challenge posed by the surging outbreak in India, which is battling a highly-infectious strain of the virus.

Australia's quarantine system witnessed an increase in the proportion of COVID-cases of Indian origin last month to approximately 56 per cent, rising from around 12 per cent a month ago.

The Howard Springs quarantine facility in the Northern Territory - where many direct flights from India had been arriving - had also recorded an uptick in the proportion of cases.

Mr Morrison said the temporary suspension would allow time for the pressure on quarantine facilities to ease and for stronger testing arrangements to be put in place.

"I have clear advice from the chief medical officer that this is a decision that is supported and should take, and we've done that all the way through," he said.

Australia's Chief Medical Officer Professor Paul Kelly has expressed his support for the measures, citing the need to take action against the rising number of positive COVID-19 cases in hotel quarantine.

However, he earlier said he had not given direct advice as to whether to
impose fines and jail sentences for Australians in India
to enforce the restrictions.

Despite saying he gave the government no advices on fines or jail, a letter from Professor Kelly to Health Minister Greg Hunt specifically noted the penalties.

In the letter, released by the federal government and seen by SBS News, Professor Kelly states that due to the high proportion of cases arising from arrivals from India, a pause would be considered an "effective" and "proportionate" response.

He told the health minister he was satisfied making it an offence for a person to enter Australia if they had been in India in the preceding 14 days was necessary to control the spread of coronavirus.

Professor Kelly said the biosecurity laws should only be used for as long as necessary, in line with a pause on all flights until at least 15 May.

But he also notes the potential consequences of the pause on flights and entry into the country could include the "worst-case scenario" of deaths.

"I wish to note the potential consequences for Australian citizens and permanent residents as a result of this pause on flights and entry into Australia," he wrote.

"These include the risk of serious illness without access to healthcare, the potential for Australians to be stranded in a transit country, and in a worst-case scenario, deaths."

Meanwhile, Mr Hunt has said the government is confident the measures put in place under the Biosecurity Act amounted to a legal response, despite concerns from a legal expert it could be unlawful
.

Mr Hunt also sought to clarify the application of the travel ban, saying people travelling from India who have been in a transit country for a 14-day period could return to Australia.

He insisted the harsh restrictions put in place were required to guard against COVID-19 infections breaking out in Australia.

"Those decisions are made to protect Australians - to protect against a third wave ... and made with a heavy heart but without hesitation," he told reporters.

'We should not be turning our back and leaving fellow Australians'

India has been consistently recording upwards of 300,000 new coronavirus cases each day but the real number of people contracting it is believed to be higher.

The country recorded 368,147 new cases over the past 24 hours on Monday, according to India's health ministry.

The burden of cases has placed mounting pressure on the country's health system, which has buckled under the pressure of surging demand for medical care, including suffering shortages of oxygen.

"I represent Indian Australians who are very anxious about the fact that they have loved ones who are stuck overseas, who want to get back and we shut the door on those people in there time of need," he told SBS News.

"It is a disgrace. We should not be turning our back and leaving fellow Australians high and dry - we are better than this."

Yadu Singh, president of the Federation of Indian Associations of NSW, said the Australian government had a responsibility to urgently organise repatriation flights for Australians stranded in India.

"Australian citizens stranded in India are their moral responsibility," he told SBS News.

"Right now in India they are in big trouble – because the COVID situation is out of control."