Prime Minister Scott Morrison wants the Australian Defence Force to make sure it can deter threats in the region and respond where necessary. 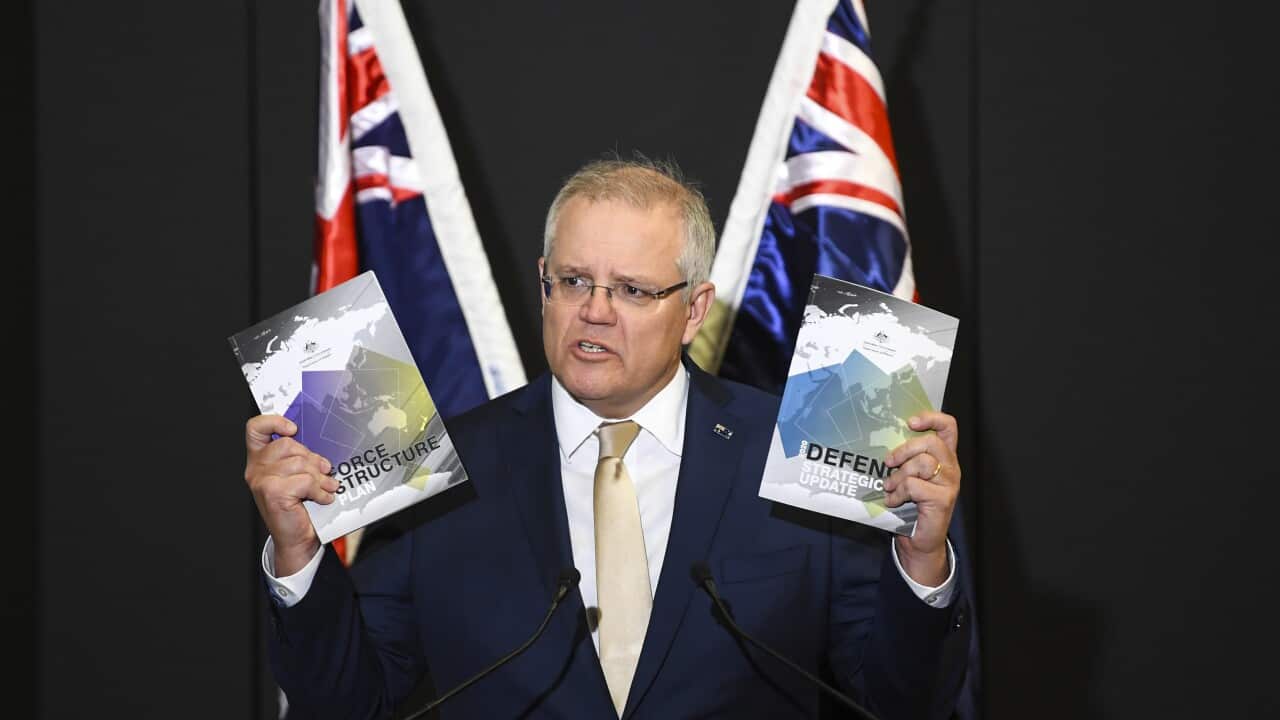 Prime Minister Scott Morrison speaks during the launch of the 2020 DefenceStrategic Update at the Australian Defence Force Academy in Canberra. Source: AAP

Prime Minister Scott Morrison has committed $270 billion over the next decade to prepare Australia's military, including with new long-range missiles, against a "more dangerous and more disorderly" world.

The prime minister on Wednesday in Canberra outlined the nation's plan to build up the Australian Defence Force and move to a greater focus on its efforts on the Indo-Pacific region.

Advertisement
"The simple truth is this: even as we stare down the COVID pandemic at home, we need to also prepare for a post-COVID world that is poorer, more dangerous and more disorderly," he said.

The speech was the unveiling of the 2020 Defence Strategic Update and the new Force Structure Plan.

Tensions are rising in the region including growing strategic competition between China and the United States and the trends identified in the 2016 Defence white paper have only accelerated.

The strategic environment and heightened risk from any miscalculation make it vital that Australia is able to respond with credible military force if it needs to, Mr Morrison said.

"If we needed reminding, 2020 has demonstrated in no uncertain terms that the challenges and threats we face as a nation evolve continuously," he said.

To this end, the government is promising to give Defence $270 billion over the next decade - up from the $195 billion promised in 2016.

It would include weapons that could strike ships or land from thousands of kilometres away, test long-range hypersonic weapons, boost cyber capacity and surveillance, and build a network of satellites so the nation has an independent communications network.

Mr Morrison said the reality was Australia has moved to a new and "less benign" strategic era.

"The Indo-Pacific is the epicentre of rising strategic competition," he said.

"Tensions over territorial claims are rising across the Indo-Pacific region - as we have seen recently on the disputed border between India and China, in the South China Sea, and in the East China Sea."

"Capabilities that can hold potential adversaries' forces and critical infrastructure at risk from a distance, thereby deterring an attack on Australia and helping to prevent war," Mr Morrison said.

The government will also invest in more highly integrated and automated sensors and weapons, including potential development of hypersonic weapons systems.

Mr Morrison said some $7 billion would be invested in space capabilities over the coming decade and invest $15 billion in cyber and information warfare capabilities.

The shift in Defence objectives matches Mr Morrison's foreign policy focus on Australia's region, including the Pacific Step-Up to create stronger ties with our closest neighbours.

It comes as the US under Donald Trump has become more inward-looking.

"Relations between China and the United States are fractious as they compete for political, economic and technological supremacy," he said.

"But we cannot allow consideration of such contingencies to drive our force structure to the detriment of ensuring we have credible capability to respond to any challenge in our immediate region.

"If we are to be a better and more effective ally, we must be prepared to invest in our own security."