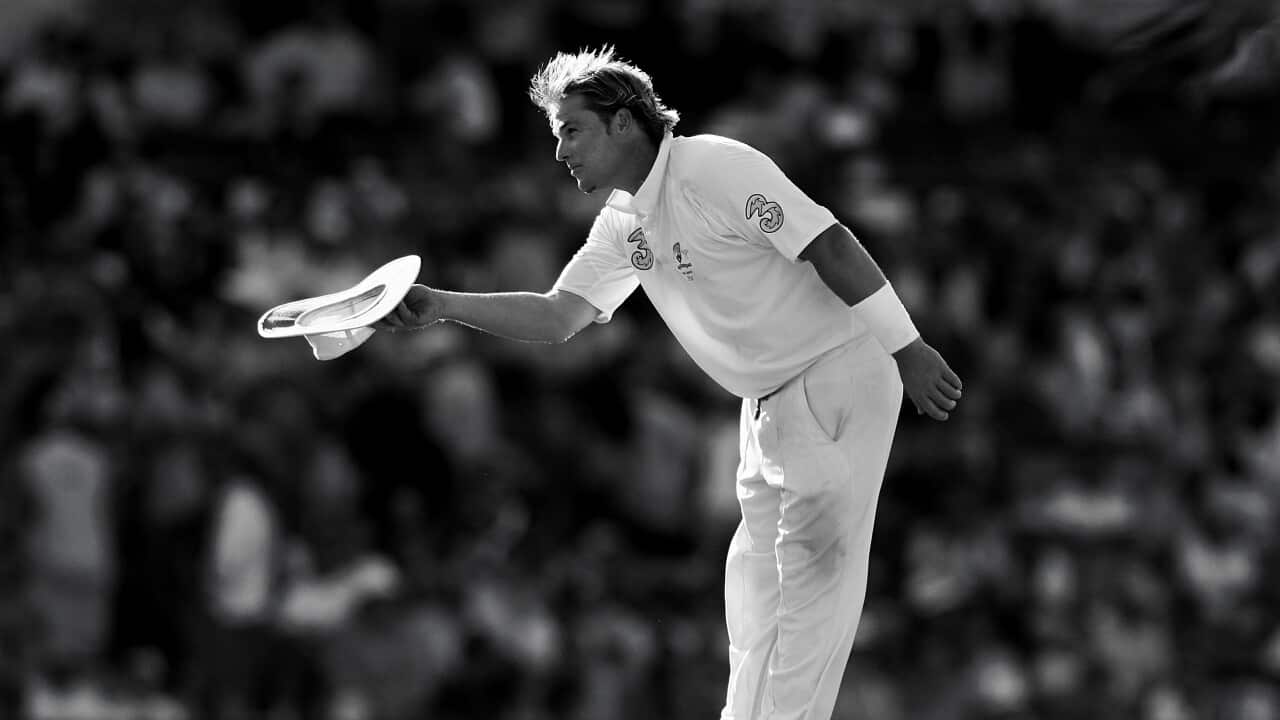 Shane Warne 1969-2022: A legend and larrikin who transcended cricket

Shane Warne made leg-spin bowling cool. The colourful character leaves a giant legacy in Australian cricket and around the world.

Even 15 years after he played the last of his 145 Tests, Australia's greatest bowler was still one of the country's most famous and colourful personalities.

Warne,
who died suddenly in Thailand on Friday aged 52
, is arguably the second-finest cricketer Australia has ever produced after Sir Donald Bradman.

Advertisement
A larger-than-life character, he captured the public's imagination by making leg-spin bowling one of the coolest things you could do as an Australian kid in the 1990s.
Shane Warne rose quickly to stardom. Source: Getty / Getty Images
Warne was freakishly good at his craft, but blending it with flair, personality and controversy made him the full package.

Born in Upper Ferntree Gully, an outer suburb of Melbourne, on 13 September 1969, Shane Keith Warne was intent on carving out a career as an Australian Rules football player with his beloved St Kilda before cricket "found" him.

His rise to international stardom was rapid and remarkable.

The Australian Cricket Academy in Adelaide didn't suit him - he was even sent home on a 44-hour bus trip from a tour in Darwin for "mooning" some hotel guests - so he quit and returned to Victoria.

He played just seven first-class matches before making an inauspicious Test debut against India in January 1992.
Shane Warne celebrates taking the wicket of England's Kevin Pietersen in 2005. Source: Getty / Chris Young/PA
Smashed to all parts of the SCG by Ravi Shastri and Sachin Tendulkar to finish with unflattering figures of 1-150, Warne went wicketless in his next Test in Adelaide before waiting seven months for another shot.

But when that next opportunity came, he grabbed it and never let go.

In just his third Test match, Warne bowled Australia to a famous victory against Sri Lanka by taking 3-0 in his last 13 balls.

READ MORE
Shane Warne's family considers state memorial offer as MCG stand renamed in cricket great's honour
From that moment, there was nothing stopping him conquering cricket and beyond.

His first heroics as an international were conducted in the low-key surroundings of Colombo, but Warne was born for the big stage.

Delivering his first ball in an Ashes series in England, Warne bamboozled England veteran Mike Gatting with the masterful 'Ball of the Century' in 1993.
Shane Warne celebrates taking the wicket of Mike Gatting with his first ball of the innings. Source: Getty / Rui Vieira/EMPICS via Getty Images
"Had I got that ball and he'd gone onto get 35 Test wickets, went back to the beach and retired, I would have been really upset, but the fact he turned out to to be the best legspinner of all-time is not so bad," Gatting said in the Shane documentary.

In the space of about three years, Warne went from club cricketer to global sport icon.

He became the face of Nike in Australia and even partnered up with NBA superstar Michael Jordan during a trip to America.

"(Jordan) loved the Aussie sports so it was great to talk to him about mindset, his approach and his competitiveness, how he loved to win," Warne said of his meeting with the Chicago Bulls legend.
A fan holds up a sign at the 2019 Ashes in London. Source: Getty / PA Images via Getty Images
The Warne brand became so big that anything he wanted, he got.

"I was front page, back page, middle page and everything was good," he said in the Shane documentary.

On the 1998 tour of India, Warne and coach Geoff Marsh requested a shipment of baked beans be delivered as they had become fed up with eating spicy food.

It was reported at the time Warne refused to eat anything else on tour other than cans of baked beans but later claimed that was a "myth".
Shane Warne and then-wife Simone in Monaco in 2002. Source: Getty / David Cannon/Getty Images
"On both sides of this big crate it was mentioned 'Shane Warne, India'," he said.

"There were a lot of other players who wanted the spaghetti and beans but it was just addressed to me."

Warne seemed close to invincible on the field, but managed to find trouble off it.

He loved cigarettes and was photographed by a teenager smoking in New Zealand in 2000, despite signing a high-profile deal to be quitting.
Shane Warne and Glenn McGrath with their children at the Sydney Cricket Ground in 2007. Source: Getty / TORSTEN BLACKWOOD/AFP via Getty Images
Warne was the star of Australia's 1999 World Cup campaign, but missed the tournament four years later after being found guilty by anti-doping authorities of using a banned diuretic.

Amid personal heartache on the eve of the 2005 Ashes, Warne was somehow Australia's most dominant player in one of the greatest Test series of all-time.

His marriage broke down after a tabloid sting revealed a salacious sex scandal, leading his wife Simone to return to Australia with their three children after the family planned to reside in England.

Still, he took 40 wickets across the five Tests, one of only eight instances of a bowler taking 40 or more wickets in a series.
Shane Warne with his parents and then-partner Elizabeth Hurley is inducted into the ICC Hall of Fame in London, 2013. Source: Getty / Gareth Copley/Getty Images
"I would play cricket and go back to the hotel room and raid the minibar. Just sit in my room by myself and just drink," he said in the Shane documentary.

After retiring from international cricket in 2007 with 708 Test wickets and one of Wisden's five cricketers of the century, Warne was an instant hit in the Indian Premier League with the Rajasthan Royals.

As a captain-coach, Warne, who had such a fertile cricketing mind that many felt he was the best skipper Australia never had, led his team to the inaugural title in 2008 to gain even more respect from cricket-obsessed Indians.

"Winning the first IPL was icing on the cake for Shane because he was already up in there (Indian) people's eyes," fellow cricket legend Sachin Tendulkar said.

Warne's friendship circle contained rock stars, footballers and politicians, and he even had a high-profile engagement to film star Elizabeth Hurley.

He is survived by his children Jackson, Brooke and Summer, mother and father Bridgette and Keith, and brother Jason.
Share
Tags
Australia