Bill Shorten has promised to release Labor's election policy costings next week, more than a week before polling day. 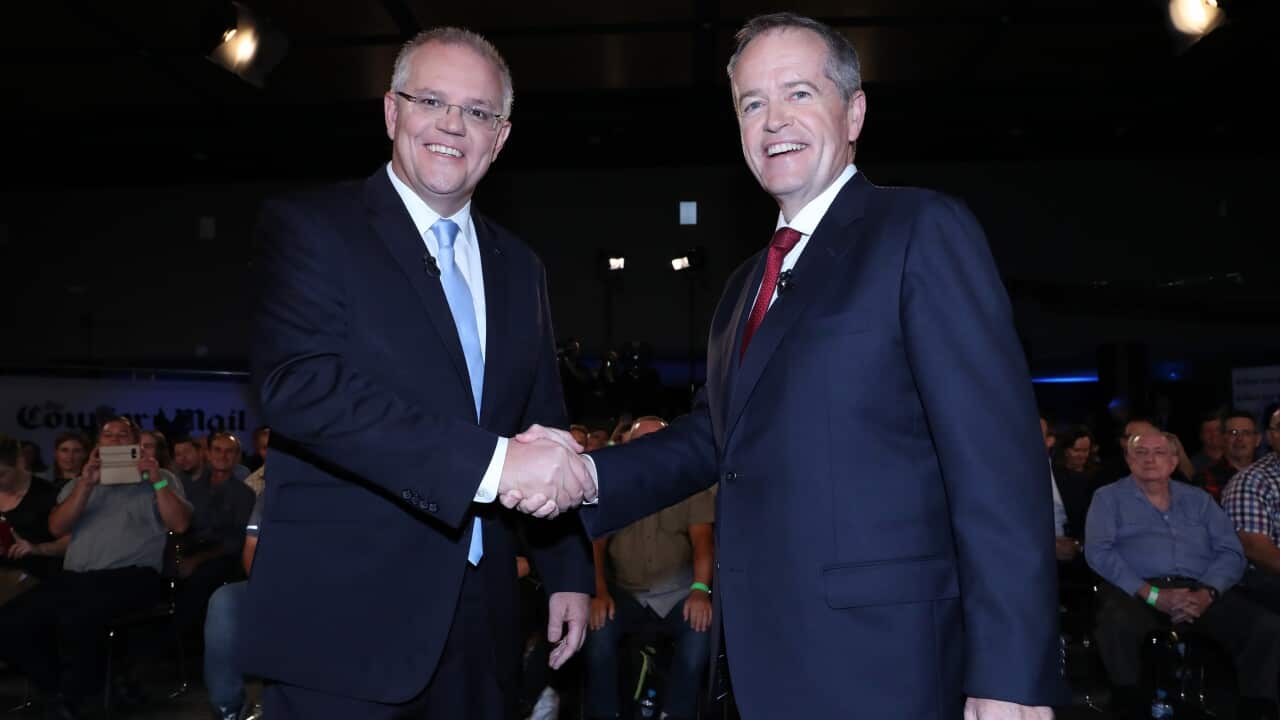 Labor leader Bill Shorten has promised to be the first opposition in federal election history to release their budget costings more than a week before the poll.

Mr Shorten and Prime Minister Scott Morrison went head to head
in an hour-long televised event
in Brisbane on Friday night, in front of an audience of 109 undecided voters.

Forty-three audience members said they were more likely to vote for Mr Shorten as opposed to 41 who said they favoured Mr Morrison. Sixteen said they remained undecided following the debate.

Earlier in the night, Mr Shorten was asked about the cost of his policies and how he would afford them and he revealed all the costings will be announced next week.

He promised to tax multinationals harder, and said the coalition had tried to cut corporate tax rates for years.

"I'm happier for him to talk for longer because he's got more taxes to explain than I do," Mr Morrison said.

The leaders were also asked about what they would do to prevent rape and protect victims.

"We need to teach our children as they grow," Mr Morrison said.

"While disrespect of women doesn't always end in violence that's certainly where it starts."

Bill Shorten will release Labor's budget ahead of the election. Source: AAP

"I think we can do even more in terms of protecting women who are in violent situations," he said.

KEY ISSUES OF THE DEBATE:

* Prime Minister Scott Morrison said it's about stopping disrespect for women, saying children have to learn early on about being respectful. His government has put $326 million towards stopping domestic violence, and legislated for unpaid DV leave.

* Labor leader Bill Shorten agreed with the prime minister's points and said he wants more refuges around the country, paid domestic violence leave and for Australians to know attitudes about degrading women are unacceptable.

* Morrison accused Shorten of having a "retirees tax" and said all of his policies had been costed through the recent federal budget.

* Shorten said Labor would release its costings next Thursday or Friday. He flagged an impending announcement about getting multinationals to pay more tax, and defended his changes to the tax system as closing loopholes.

* The prime minister said his government's review into religious freedom found there should be a Religious Discrimination Act. He believes in the freedom of religion but people need to be mindful of others when expressing their views.

* Shorten said he believes in freedom of religion, but that a lack of civility has taken over public debate. He says social media needs to be more accountable for what is said on it, and that conflict makes headlines more often than not.

* Morrison said mental health is the biggest problem facing Australia, with young people taking their own lives. He believes in youth mental health organisation Headspace, saying it has prevented suicides.

* Shorten says people are now more willing to talk about mental health and suicide, and he also believes in Headspace. The Labor leader had the audience raise their hands if they have been affected by suicide, with close to half the room putting their arm up.

* Morrison said it's not about how much you spend, but how you spend it, using the example of a new hall compared to good teachers. He said school funding will increase under his government.

* Shorten spruiked Labor's plan for universal access to child care for all three-year-olds and said he wants to increase funding for schools so they can employ more teachers and so all children can afford to take part in activities such as school camps.

* Shorten was asked when he would deliver a surplus budget, saying he planned to every year.

* Morrison said he'd be doing it "without increasing taxes".

* Morrison said he has a plan to reduce emissions by 26 per cent compared to Labor's 45 per cent, while Labor can't explain how it would affect the economy. He also admitted emissions have been rising under his government.

* Shorten started by saying emissions have been rising under the coalition, before saying he has a more ambitious target because "we owe it to our kids, to our future".

* The prime minister said he knows how to manage money and that Australians would keep more of what they earn under his watch. He also warned that "now is not to turn back".

* Shorten asked the audience if they thought the past six years have been fantastic, saying that rising costs show the economy is not working in the interests of working class people.