The Victorian government says it is working to lift the ban on IVF procedures as soon as possible amid fears patients could travel interstate to access services if it drags on. 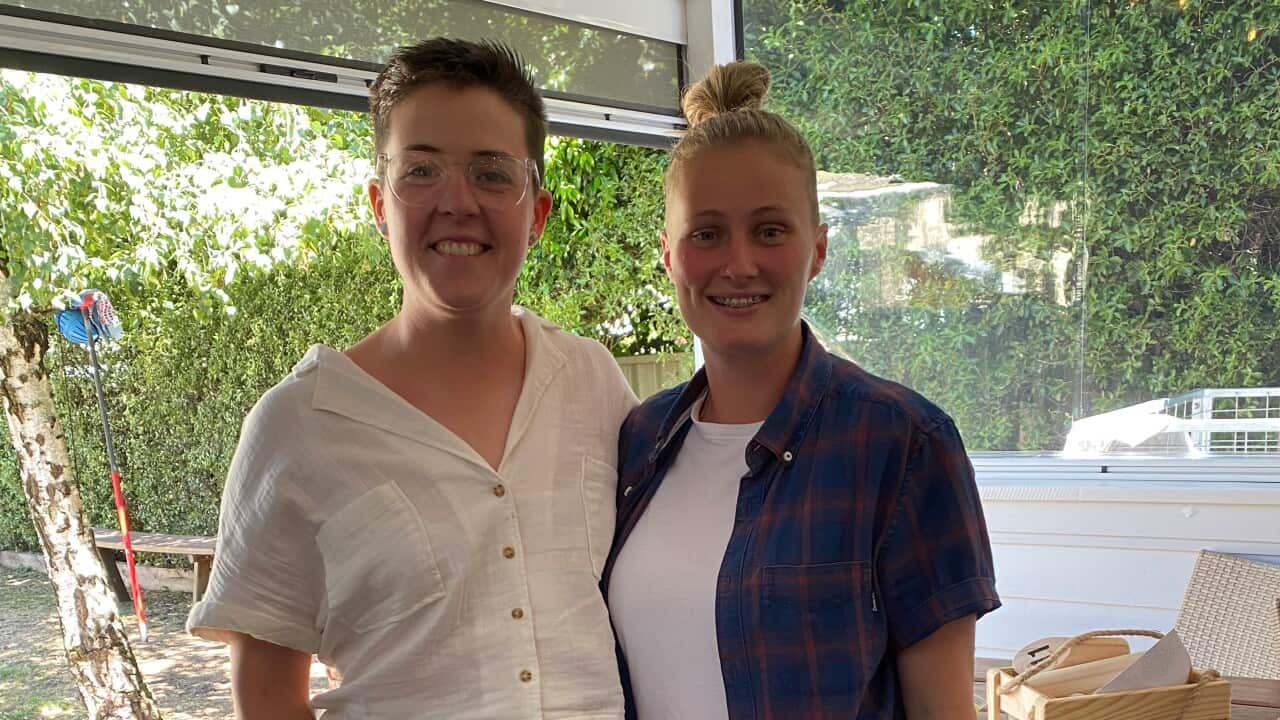 Kate Brierley and her wife Emma are "desperate" to have a child.

It hasn't been an easy ride for the Victorian couple, who started their journey in May last year. The COVID-19 pandemic meant they faced delays when choosing a sperm donor, and Mrs Brierley wasn't allowed into the room when her wife underwent intrauterine insemination (IUI) on two occasions.

"It was a kick in the guts when I wasn't allowed to be in the room when that happened, but we went with it and accepted it," Mrs Brierley told SBS News.

Advertisement
With their IUI attempts unsuccessful, their specialist recommended in December that they could undergo in vitro fertilisation (IVF).

"Unfortunately because of the Christmas closures we weren't able to do an IVF treatment in December ... so we thought right, January comes and we're able to start the process."

But they were devastated when the Victorian government announced a 90-day ban on IVF procedures for new patients — which some have described as "illogical", "cruel" and "heartless" — as it contends with a health system in crisis with COVID-19 cases and hospitalisations growing.

The ban means that women who were set to commence new IVF treatment cycles after 6 January will now have to wait until mid-April to begin them.

Cycles that are already underway will be allowed to continue, and women who are undergoing other health treatments that would render their eggs unviable will be granted exemptions.

"With IVF ... time is everything," Mrs Brierley said. "My wife is planning to carry; she's not too old, only slightly older than I am, but there are other women out there who are in their 40s or even their 50s who are trying to get pregnant, so this [ban] is very detrimental to everyone."

Mrs Brierley is among more than 108,000 others who are calling via a Change.org petition to reinstate IVF treatments in Victoria, which the creators describe as "essential".

She said this is the case because same-sex couples and people who are infertile might have no other option.

"No one chooses to go through IVF ... that's what's so upsetting," she said.

READ MORE
Do you really need IVF? A new online tool can help you weigh up your options

In an emotional video posted on Instagram that has since gone viral, Melanie Swieconek made a plea to the state government to lift the plan.

“Not one other person who is going through IVF or has been through IVF or is just about to start IVF has elected to do it. This is something we are doing as our only opportunity to have a child," she said.

“To just put a blanket ban on IVF for three months ... you can’t have any idea what this will do to some women.”

Government working to lift IVF ban, but no timeline yet

The ban came into effect after Victoria called a "Code Brown" emergency.

This is a recognised code across the country that is used by health services in light of an external emergency. It's aimed at developing a plan that will alleviate the pressures placed on hospitals.

Following the announcement on Tuesday, the federal government revealed it will activate the private hospitals agreement that was created in the wake of the COVID-19 pandemic in 2020.

The agreement required private hospitals to provide assistance - be it equipment, staff, or other resources - to the public health sector when called upon.

Most IVF services are run through the private sector.

Prime Minister Scott Morrison said on Wednesday that IVF was not an elective procedure and that early in the pandemic, national cabinet agreed this was the case and that these treatments should continue.

Both Victorian Premier Daniel Andrews and Deputy Premier James Merlino have said they are working to lift the ban on IVF as soon as possible, but they have not provided a timeline.

“It’s a very, very challenging journey for anyone to go through,” Mr Andrews said on Wednesday.

“It’s made even more difficult in the midst of a global pandemic.

“I want to assure everyone who’s impacted by this, that we’re working as hard as we can to get day procedures back up and running.”

State opposition leader Matthew Guy on Tuesday described the ban as "cruel" and "heartless", while Liberal MP David South called on the state government to "reverse their illogical and heartbreaking decision".

Fears patients could travel for IVF if ban continues

In a joint statement, Australia's two largest fertility providers Monash IVF and Melbourne IVF welcomed comments by the state government that it was working to resume IVF services as quickly as possible.

Fertility Society of Australia president and Monash IVF medical director, Professor Luk Rombauts, said in a statement that the ban was "particularly difficult for those patients who do not have time on their side, due to factors such as age and health conditions which are out of their control."

“For some an extended period of time without IVF treatment may mean they will not achieve a pregnancy at all," Professor Rombauts said.

He told SBS News the ban was particularly difficult for women who are approaching menopause, and that his clinic did not usually treat people after the age of 46.

He fears if that ban drags on, it could cause some people to travel interstate to access IVF services.

Professor Rombauts said a 45-year-old patient had asked him on Tuesday what options she had, and if she could travel to New South Wales for treatment.

"Technically yes, they could do that. But then you put more strain on another health service and that's not what we would recommend," he said.

He said many who worked in the sector aren't suited to be seconded to help in intensive care units because they are "technically focussed on IVF services".

He said IVF providers would welcome a discussion with the Victorian government to outline how IVF services can be delivered safely at this time.