An Australian peacekeeping mission has landed in Honiara to help quell civil unrest in the Solomon Islands. 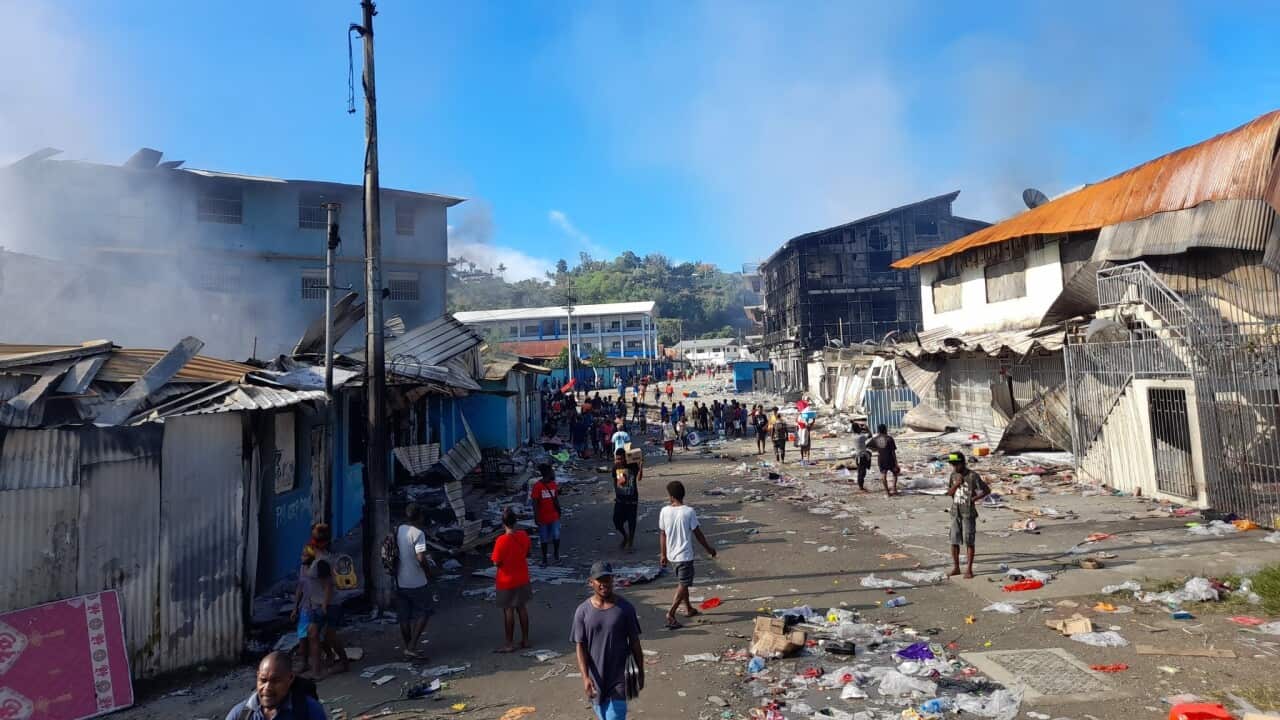 Damage in an area of Honiara on Friday. Source: Charley Piringi/Twitter

A small number of officers successfully dispersed the crowd who had set fire to at least one building, driving them back toward the centre of Honiara, which has been left smouldering after three days of violent protests against Sogavare's rule.

Advertisement
Thousands of people - some brandishing axes and knives - rampaged through the city's Chinatown, Point Cruz and business districts, according to an AFP reporter on the scene.

A house belonging to Prime Minister Manasseh Sogavare was also reportedly set alight during the chaos on Friday.

In Chinatown, a large warehouse was set alight, causing an explosion that sent scores of people fleeing from the scene in panic.

There were also reports of a tobacco warehouse being set alight as smoke from previous days fires cast parts of the devastated city of 80,000 people in an acrid haze.

The small Pacific Island nation has been rocked by days of violent anti-government demonstrations.

The first of Australia's snap peacekeeping deployment arrived overnight, within hours of Solomons Prime Minister Sogavare appealing to neighbours for urgent help quelling the unrest that threatened to topple his government.

On Friday, Papua New Guinea sent a detachment of 34 peacekeepers to help staunch the violence.

Australia will send an additional 43 troops and officers in the coming days, with 15 federal police officers set to arrive on Friday.

Home Affairs Minister Karen Andrews said the Australian mission, comprised of about 100 police and military personnel, was intended to restore law and order.

"The situation is very volatile there. At the moment we know that the rioting has escalated over the last couple of days," she told Sky News, adding that the troops would secure critical infrastructure including Honiara's airport and port.

Ms Andrews said the latest Australian deployment was expected to last "a matter of weeks", unlike Canberra's previous peacekeeping mission, which ran from 2003 to 2017 and cost about US$2.2 billion.

"Our primary goal is to restore law and public order, it is certainly not to intervene in any of the political matters that are happening at the moment," she said.

Mr Sogavare said the Solomons had been "brought to its knees" by the rioting but vowed to resist calls for his resignation.

The pro-Beijing leader claimed foreign powers opposed to his 2019 decision to switch the Solomons' diplomatic allegiance from Taiwan to China were behind the disturbances.

"Unfortunately it is influenced and encouraged by other powers ... I don't want to name names, we'll leave it there, we know who they are," he told the ABC.

Others blame pandemic-fuelled economic frustrations and a long-running rivalry between residents of the country's most populous island Malaita and the central government based on the island of Guadalcanal.

The archipelago nation of around 700,000 people has for decades been beset by ethnic and political tensions.

The latest bout of unrest began Wednesday when thousands of protesters besieged parliament, setting fire to an outbuilding and seeking to oust Sogavare.

It then descended into a violent free-for-all, as mobs of stick-wielding youths ignored a curfew and rampaged through the capital, stripping stores of goods and clashing with police.

By late Thursday thousands of looters openly defied police lockdown orders, running through the streets carrying boxes, crates and bulging sacks of goods as flames crackled around them and plumes of thick black smoke billowed high above the city.

In Beijing, foreign ministry spokesman Zhao Lijian expressed "grave concern" and called on the Solomon Islands government "to take all necessary measures to protect the safety of Chinese citizens and organisations".

In the late 1990s Guadalcanal militants launched attacks on settlers, particularly targeting those from Malaita, and for five years unrest plagued the country.

The so-called "Tensions" only eased with the deployment of an Australian-led peacekeeping mission - named the Regional Assistance Mission to the Solomon Islands.

Malaita residents have long complained that their island is neglected by the central government, and divisions intensified when Sogavare recognised Beijing.

Malaita authorities opposed the move and defiantly maintained contact with the Taiwan authorities. As a result the province continues to receive outsized aid from Taipei and Washington.

The province's premier Daniel Suidani has accused Sogavare of being in Beijing's pocket, alleging he had "elevated the interest of foreigners above those of Solomon Islanders".

"People are not blind to this and do not want to be cheated anymore," he said.

Solomon Islands Opposition Leader Matthew Wale on Friday said he "categorically rejects" claims that he incited or is responsible for the riots in Honiara.

Mr Wale told ABC Radio that people in Honiara feel powerless to change things in the country through the democratic process.

“The Prime Minister’s comments on Malaitans not to bang their heads against a brick wall was culturally insensitive. It has further incited feelings," he said.

His comments come after he called on the prime minister to "do the right thing" and immediately resign.

Experts say geopolitical rivalry did not trigger the crisis directly, but it contributed.

"The actions of these great powers -- while they curry favour with individual political actors - have a destabilising effect on what is already a fragile and vulnerable country," said Mihai Sora, an expert on the Pacific at Australia's Lowy Institute.

"Then of course the contemporary context is one of extended economic hardship due to Covid restrictions, a Covid state of emergency," he told AFP.