Spain reopens its border and lifts coronavirus state of emergency

Spain has been among Europe's hardest-hit nations, but on Sunday it lifted a slew of restrictions in a bid to get its tourism industry back up and running. 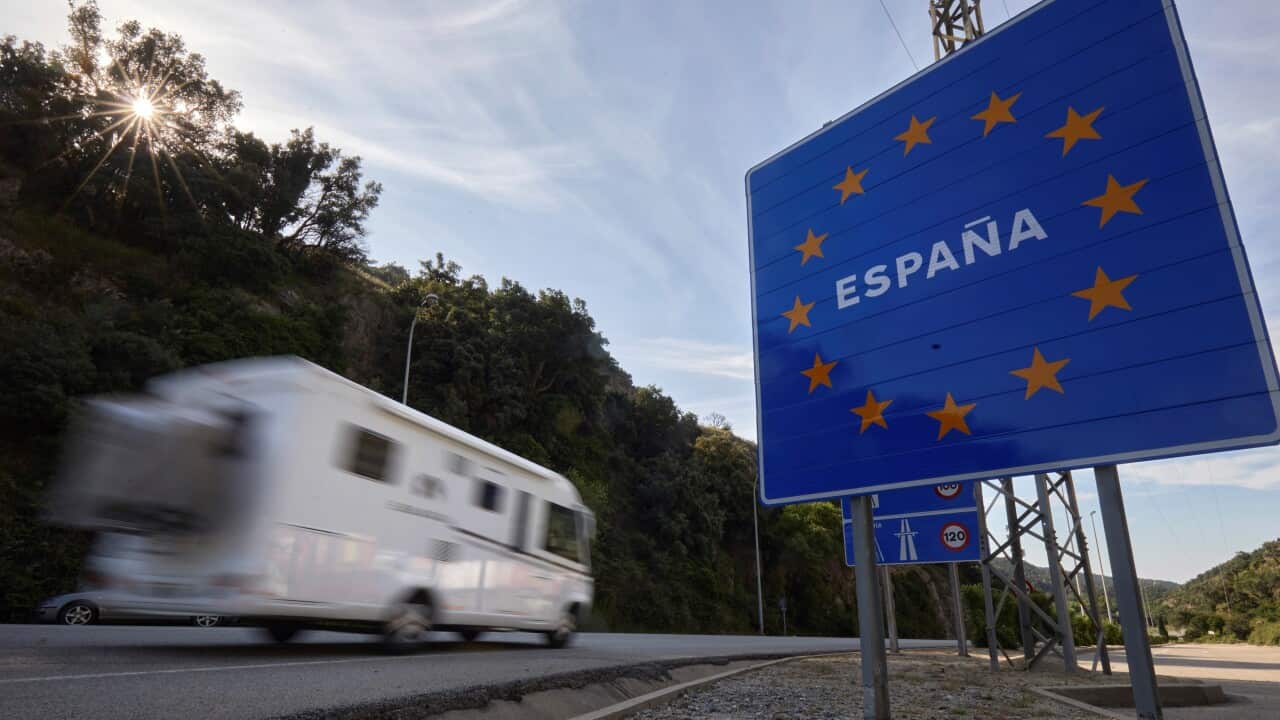 Spain has opened its borders for travelers from most of Europe after lifting the state of emergency and lockdown to stop the spread of the coronavirus. Source: AP

Spain reopened its borders on Sunday, a significant stage in Europe's gradual reopening after its battle against the coronavirus, as infections in Latin America surged past two million.

Traffic flowed again across the Spain-France border in a watershed moment for the millions of businesses and workers across Europe that have suffered badly from the economic downturn caused by tough lockdowns.

"We wanted to be in Spain for the sun, the beach, tapas, and I'm already wearing my swimsuit under my clothes," said Frenchwoman Sylvia Faust, who crossed into Spain with her 17-year-old daughter.

Advertisement
Travellers waiting in line at shops and markets located at the Spanish-French border. Source: AP

There was no such joy in Latin America, however, where grim records kept on tumbling.

Brazil is the second worst-affected country with almost 50,000 deaths and more than one million cases, helping to push Latin America's total infections beyond the two million mark, according to an AFP tally early on Sunday.

The spread of the virus is accelerating in the region, with Mexico the second hardest-hit country followed by Peru and Chile.

Clusters have also emerged in the Palestinian territories, Morocco and Iran, where officials have now registered more than 100 deaths a day for three days running.

Brazil has surpassed one million confirmed infections, second only to the United States. Source: AP

Beijing is also battling a new outbreak which has so far registered just over 200 cases.

The authorities have taken more than two million samples to test and banned imports of chicken from an American producer, suspecting the virus could have been imported in contaminated food.

Although the spread has slowed in Europe, it remains the worst-affected continent with more than 2.5 million cases.

As well as opening its land border with France, Spain also welcomed EU nationals, those from the passport-free Schengen zone and Britons at seaports and airports - without enforcing quarantine periods.

"We must remain on our guard and strictly follow hygiene and protection measures," Prime Minister Pedro Sanchez said on Saturday, stressing that the danger has not passed.

In the Netherlands, police clashed with protesters frustrated over the government's coronavirus response and made dozens of arrests in centre of The Hague.

Police said the protest, attended by hundreds, was peaceful until a group of football fans clashed with riot police at the nearby Central Station, throwing stones and bottles.

In France, millions of children were preparing to return to school on Monday after three months away, and cinemas and theatres were also getting set to reopen.

On Sunday, France celebrated its annual music festival marking the summer solstice, with bands playing in cafes, restaurants and on streets across the country.

A pianist performs at the Philharmonie in Paris as part as the France's annual music festival to mark the summer's start. Source: AP

In Germany however, concert halls and other institutions still face an uncertain future with social distancing rules forcing them to slash their events calendars and drastically reduce capacities.

On the eastern fringes of Europe, cases have spiked again in Azerbaijan, forcing the government to institute another lockdown - much to the irritation of local workers.

"The government again cages us in like zoo animals and gives not a damn for the consequences," taxi driver Shahin Mamedkuliyev told AFP.

Saudi Arabia on Sunday ended its coronavirus curfew, lifting restrictions on businesses including hair salons and cinemas, despite a spike in infections.

Saudi Arabia coronavirus cases surge ahead of the hajj

It also reopened its mosques in Mecca, Islam's holiest city, after a three-month shutdown.

But international flights and religious pilgrimages remain suspended and the authorities have not yet said whether they will proceed with this year's hajj, scheduled for the end of July.

The United States is the worst-hit country overall and continues to post the second-highest daily death figures.

Nevertheless, President Donald Trump held his first campaign rally in months on Saturday, inviting thousands to an arena in Oklahoma - although there were many empty seats.

He told the crowd how he had instructed his team to slow the rate of testing to reduce the number of registered cases.

US President Donald Trump speaks during a rally inside the Bank of Oklahoma Center in Tulsa. Source: AAP

"When you do testing to that extent, you are going to find more people, you will find more cases," he said, even as six members of his advance team tested positive for COVID-19.

Mr Trump is attempting to kickstart his campaign for re-election in November during an outbreak that has killed 120,000 and clocked up more than 2.2 million cases, and with the economy tanking.

Scientists are still learning about the virus, its symptoms and the way it spreads - and a vaccine still remains a distant possibility.

The World Health Organisation has warned that lockdowns and other restrictions are still the best way to control the spread and urged people not to become fatigued with stay-at-home measures.