More than 700 tonnes of oil liquid waste and 260 tonnes of solid waste sludge and debris has so far been removed from the ocean after the Japanese-owned MC Wakashio ran aground on a coral reef. 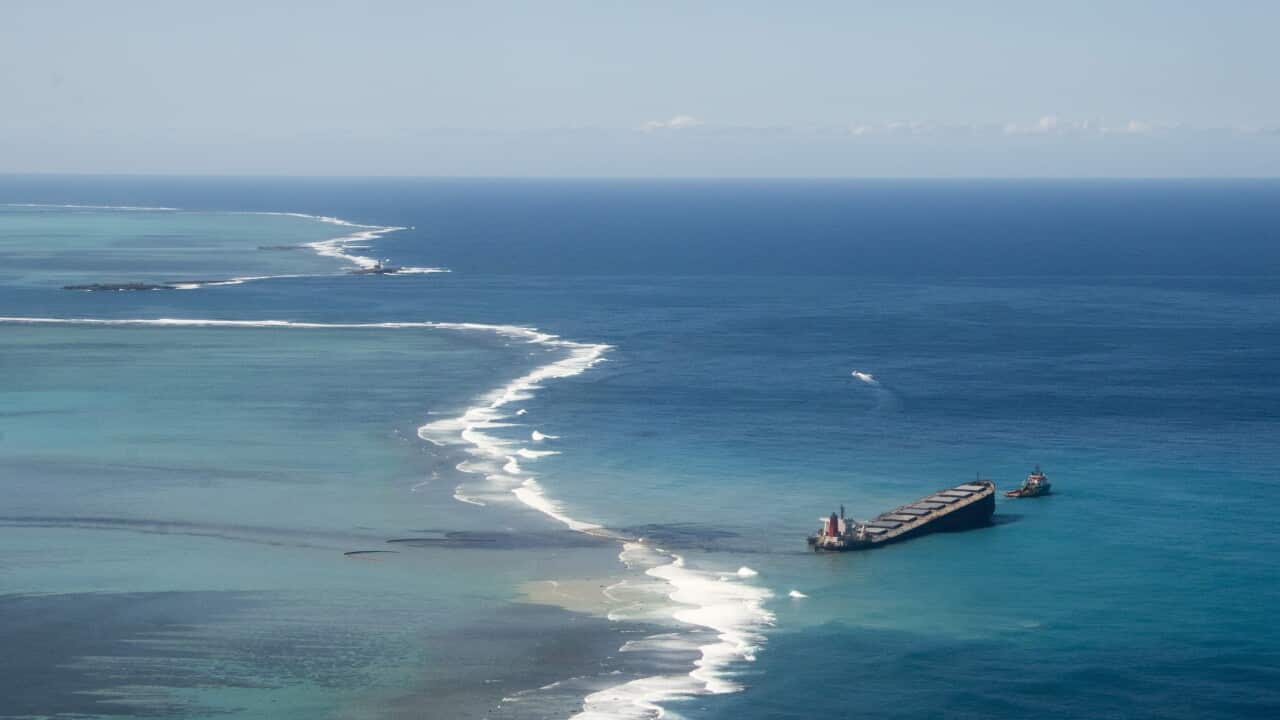 A fresh streak of oil spilled Friday from a ship stranded on a reef in pristine waters off Mauritius, threatening further ecological devastation as demands mount for answers as to why the vessel had come so close to shore.

The Japanese-owned MV Wakashio ran aground on a coral reef on 25 July and a week later began leaking over 1,000 tonnes of oil into a protected marine park boasting mangrove forests and endangered species.

France and Japan have responded to the Indian Ocean island's call for help, along with thousands of Mauritians who volunteered day and night to clean sludge from powder-blue waters that have long been a favourite among honeymooners and tourists.

Salvage crews raced against the clock, with the boat threatening to split in two, to pump almost 3,000 tonnes of remaining fuel off the boat.

While the boat's reservoirs were successfully emptied on Wednesday, preventing further devastation, some of the remaining 100 tonnes of oil from the cargo hold began to leak on Friday, according to a statement from the national crisis committee on the disaster.

"According to experts this kind of leakage was expected and is due to the bending and twisting of the vessel," said the statement.

Fisherman Alain Francois said earlier Friday that "the water has again turned black" around the ship.

A detailed view of the broken hull of the MV Wakashio after it ran aground off the southeast coast of Mauritius. Source: AAP

The crisis committee statement said additional booms and equipment had been deployed to contain the spill, and would be joined by a new skimmer vessel soon.

So far more than 700 tonnes of oil liquid waste and 260 tonnes of solid waste sludge and debris has been removed from the ocean.

Volunteers have been asked to stop deploying homemade "booms" stuffed with straw and hair until a structured clean-up plan supervised by experts is formed.

"The aim is to ensure a scientific approach for a prompt rehabilitation of our ecosystem," read the statement.

The spill is an ecological and economic disaster for Mauritius, which relies heavily on tourism.

The government has come under fire - including from opposition leaders - for doing too little in the week after the ship ran aground, while experts from the Japanese Nagashiki shipping company, which owns the Wakashio, took three weeks to arrive.

Greenpeace wrote a scathing letter to the ship's owners this week, saying: "many unanswered questions remain. Why was your vessel sailing so dangerously close to the reef? Why have you done so little since the ship ran aground? What will you do to reduce the damage to the environment, and the pain and suffering of those whose livelihoods depend on it?"


In a statement Friday night, the government said it would seek compensation from "the owner and the insurer" for "all losses and damages" caused by the spill as well as for costs related to the clean-up.

It also said all Mauritians who sustained losses as a result of the spill would be able to submit claims via an electronic platform, though it stressed that the Mauritian government itself was not accepting responsibility.

The ship's owner has pledged to "sincerely" respond to requests for compensation over damage to the marine environment.

Volunteers take part in the clean up operation in Mahebourg, Mauritius, on 12 August. Source: AAP

"We are deeply conscious of our responsibility as a party directly involved in the case," said Kiyoaki Nagashiki, president of Nagashiki Shipping.

"Regarding compensation, we plan to deal with the issue sincerely based on applicable laws," the head of the Okayama-based company said in a statement.

"We will continue to do our utmost to collect the leaked oil and to minimise the impact of the environmental pollution," he added.