Thousands of protesters broke out into dance at a rally against Sydney's lockout laws, hours after emergency workers called for the laws to stay. 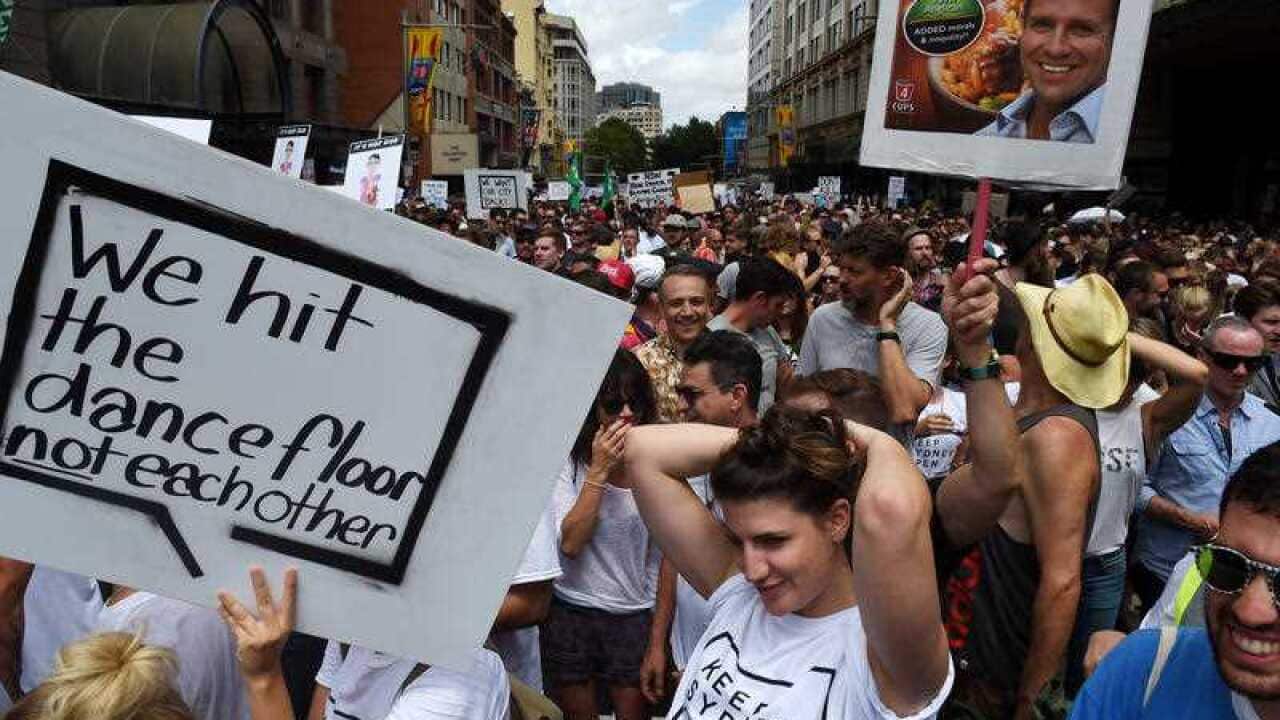 A rally against Sydney's lockout laws turned into a dance party after thousands marched through the city.

Hours after emergency service workers urged the NSW government to keep the laws, Sydneysiders took to the streets in a rally organised by the Keep Sydney Open group.

Opponents say the laws are killing off the city's nightlife with venues being forced to close and hundreds of jobs disappearing along with patronage.

“For the government to put such confines on us, I don’t think it’s fair,” he said at the Sunday afternoon protest from Belmore Park to Hyde Park.

The legislation requires central Sydney venues to turn people away from 1.30am, serve last drinks by 3am and ban the sale of takeaway alcohol after 10pm.

The suite of measures were introduced following a number of one-punch deaths and assaults during alcohol-fuelled nights out.

"We hit the dance floor, not each other," read one placard, while another read, "Drop the Mike!"

Keep Sydney Open’s Tyson Koh told SBS there are a range of other measures, including increased police presence, that should be considered first and that curfews should be a last resort.

“We know it’s a very small amount of people who are antisocial and get violent during a night out,” Mr Koh told SBS.

“They’re the people who need to be addressed.”

Sydney musician Harley Streten, better known as Flume, currently has the number one song in country. Flume penned an open letter to NSW Premier Mike Baird urging a scaling back of the lockout laws.

At the Sydney rally Flume told SBS he’s concerned about the impact of the curfews on emerging talent.

“I’ve got a great career now and a lot of that was due to Sydney nightlife and nightlife around Australia in general,” Flume said.

“It’s being threatened and there are better ways to deal with the issue.”

But a coalition of NSW doctors, nurses, paramedics and police disagree.

Booze-fuelled violence has "fallen off a cliff" since the laws came into effect, emergency services say.

Dr Tony Sara told reporters in Sydney the number of victims of alcohol-related violence turning up at St Vincent's Hospital had fallen by one-third since the laws were introduced.

"All assaults have gone down by 32 per cent and the number of severely injured persons has also gone down," he said.

"Prior to that, it was scores every year."

Dr Sara rejected suggestions that violence had simply been pushed to pockets of Sydney where the laws do not apply.

He claimed it was a "furphy" being peddled by the alcohol industry and he called for an expansion of the lockouts.

However, Dr Sara said relaxing the laws for live music venues "could be a good idea" if proven effective through a small-scale trial.