Thirteen people are now linked to a coronavirus cluster at a Sydney pub and thousands more will likely need to self-isolate for 14 days. 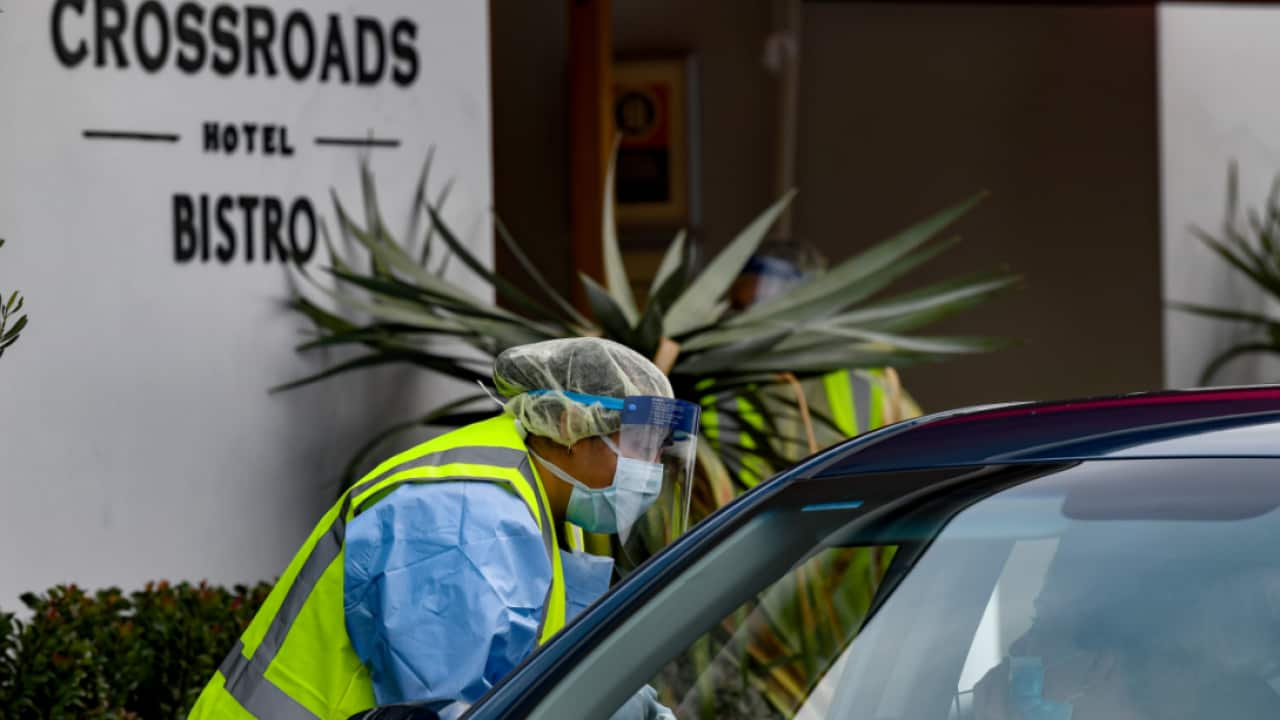 More than 20 COVID-19 cases have been linked to a Sydney pub outbreak while several other venues across the state have been put on alert after being potentially exposed to the virus.

NSW recorded 14 new COVID-19 cases as of 8pm on Sunday with four in hotel quarantine, two are NSW residents who caught the virus in Victoria, and eight linked to the Crossroads Hotel outbreak.

Advertisement
Dr Chant later on Monday confirmed an additional seven cases had been reported up to midday - all linked to the Crossroads Hotel.

Four of the new cases confirmed on Monday are travellers in hotel quarantine, while another two are NSW residents who caught the virus in Victoria.

Eight are linked to an outbreak at the Crossroads Hotel in southwest Sydney, including a teenage pub worker, a Sydney woman in her 40s and a Victorian man in his 20s who had already been revealed to have tested positive.

None of the new cases are believed to have been the source of infection at the hotel, according to NSW Health.

All patrons of the Casula pub, who entered from 3 to 10 July, must now self-isolate and are being urged to get tested as a precaution.

The outbreak has prompted the closure of another venue for cleaning, as one of those infected attended Picton Hotel on 4, 9 and 10 July.

Meanwhile, The Star Entertainment Group on Monday said a patron who visited the Sydney casino on July 4 had tested positive.

It's unclear if that case was included in NSW Health's Monday case total. NSW Police Minister David Elliott on Monday issued a stern warning to the hospitality industry as well as patrons as a result of the escalation in cases  at pubs and clubs.

"We cannot afford to have these sorts of slips when it comes to the restrictions that are in place allowing our hospitality industry to begin the road to recovery," he told reporters in Sydney on Monday.

"The moronic behaviour of people at dance parties has got to stop," he told reporters.

NSW Government Minister Stuart Ayres on Monday said he didn't think the state's virus outbreak was getting out of control, but it was important that Crossroads visitors get tested.

"I think we're in a pretty good place at the moment, but we are at the crossroads," Mr Ayres told Seven's Sunrise.

"I know it's a pun that everyone wants to use at the moment, but there's probably never been a more symbolically named hotel than where we sit right now.

"This particular hotel is located at the juncture of the M7 and the M5, it's a big traveller's hotel, which is why if anyone's been in that location it's so important that they go and get tested immediately."

Werriwa MP Anne Stanley said she had been tested and gone into self-isolation after dining at the Crossroads Hotel last week.

In an Instagram post on Sunday, the federal MP said her office would be closed as a precaution with all staff working from home.

Several defence force personnel are also isolating after attending the hotel but NSW Health said none of them have tested positive.

On Sunday night, Casula's Planet Fitness gym confirmed on its Facebook page that a member had returned a positive test for coronavirus.

"The member has not been at the club since Friday 10 July, and is in quarantine," the gym's letter to members said, adding that staff were in self-quarantine and it was following NSW Department of Health advice.

The gym has been closed and is being disinfected.