The Tamil mother embroiled in a dramatic asylum case is pleading with the prime minister to show compassion and allow her family to stay in the country. 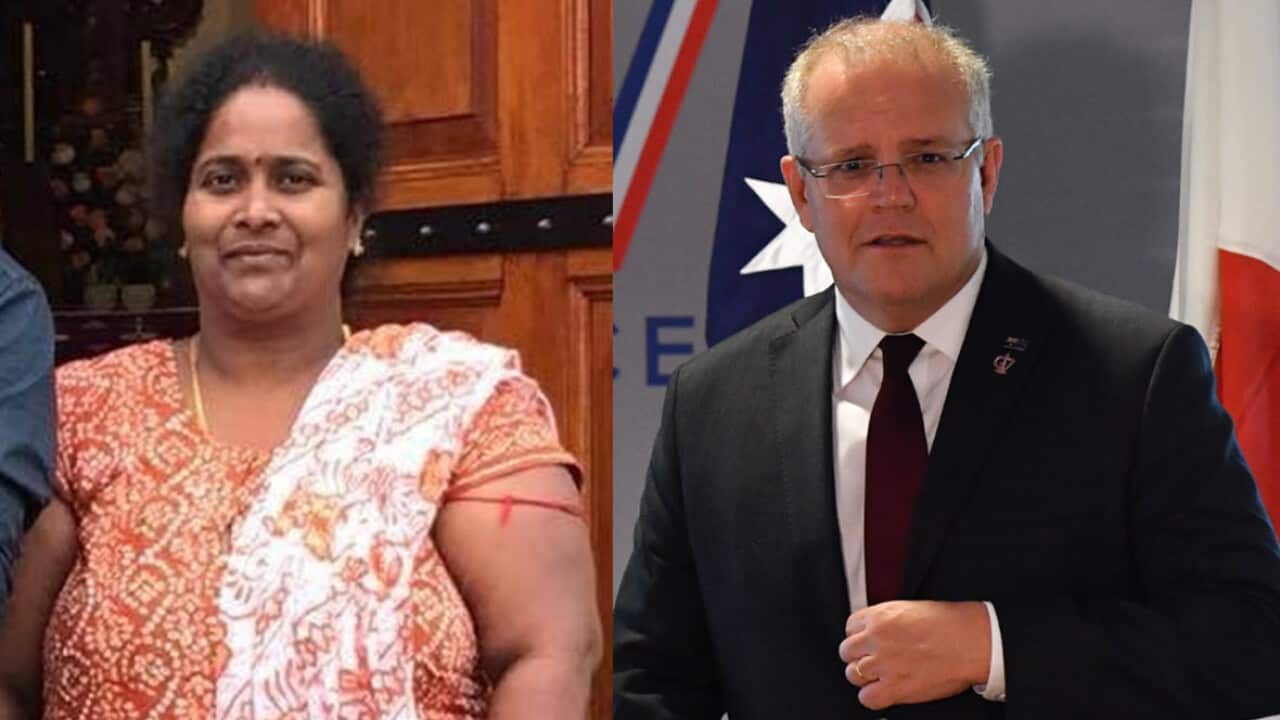 The Tamil mother at the centre of an asylum dispute has pleaded with Prime Minister Scott Morrison to allow her family of four to stay in Australia.

Speaking to SBS's Tamil program from Christmas Island, where the family have been recently taken, Priya said she is feeling the toll of the family's recent ordeal and her children are desperate to find out when they can return home to the small Queensland town where they had been living before entering immigration detention.

"The honourable prime minister is the father of two children, so he should understand the feelings of other parents. I plead that he shows my family mercy," she said.

Advertisement
"My husband's heart is broken. I'm also physically weak from the injuries that I endured while being handled by security guards [during the deportation].

"My children keep asking 'when are we going home?'"

But the government is unmoved by the pleas from the family which have had their refugee claims rejected.

Home Affairs Minister Peter Dutton
defended the government's handling
of the case on the Today Show, saying the family had been moved to Christmas Island so they could be flown back to Sri Lanka without protesters putting Border Force officials in a "difficult position".

"These advocates lie about the way in which this family has been treated, that they've been forced, they've been pulled by the border force officials. It's complete nonsense."

As news of the family's relocation from a Melbourne immigration centre to Christmas Island spread on Sunday, thousands of Australians rallied across the country in the hope of saving Priya, her husband Nadesalingam and their Australian-born daughters Kopika, 4, and Tharunicaa, 2, from deportation.

Protests kicked took place in all capital cities and the Queensland town of Biloela, where the family had lived before being forcibly removed in March 2018.

"We are calling on the federal government not to deport the Biloela family. They are in real danger if deported back to Sri Lanka," Refugee Action Collective's Chris Breen said.

"They have real claims for protection [in Australia]."

"This is a minister in Peter Dutton taking pleasure in the suffering of others, that's what going on here. It's barbaric, it's cruel and it needs to end," he said.

"What was the cost of that move for the Australian taxpayer ... this is publicly funded cruelty on behalf of a government that really has just lost touch, and has lost its way," he said.

Mr Dutton has refused to budge in the facing of mounting community pressure.

"We stand here to show Scott Morrison that as a nation we want him to show compassion and we want him to lead this nation to allow Priya Nades, Kopika and Tharunicca to stay, to stay in Australia and come back to Biloela," she said.

The family was flown from Darwin to an Australian detention centre on Christmas Island after a temporary injunction halted their direct deportation from Melbourne to Sri Lanka.

Carina Ford, their Melbourne-based solicitor, said they were the only detainees on the island and claimed: "it may have been specifically re-opened for them".

"I don't really understand the motive of the Christmas Island move given that there are many other functioning detention centres in Australia, on the mainland," she said.

Priya told friends and supporters that aside from staff and guards they are all alone.

"My children have been separated from their world," she said.

Hundreds of people attend the Let Them Stay Rally and march at the State Library of Victoria. Source: AAP

The move has created logistical issues for lawyers who are due to face the Federal Circuit Court on Monday morning and Federal Court on Wednesday.

Federal Court Judge Mordy Bomberg on Friday extended an interim injunction until Wednesday as two-year-old Tharunicaa had not been assessed for a protection visa.

SBS presenter Craig Foster speaks to the crowd during the Let Them Stay! emergency rally at Martin Place in Sydney. Source: AAP

"I would like the family to accept that they are not refugees, they're not owed protection by our country," Mr Dutton told the Nine Network on Friday.

The case has been "comprehensively assessed" and reviewed since 2012, a Home Affairs spokeswoman said.