Anger is growing against fresh COVID-19 restrictions imposed in response to a surge in cases across Europe. 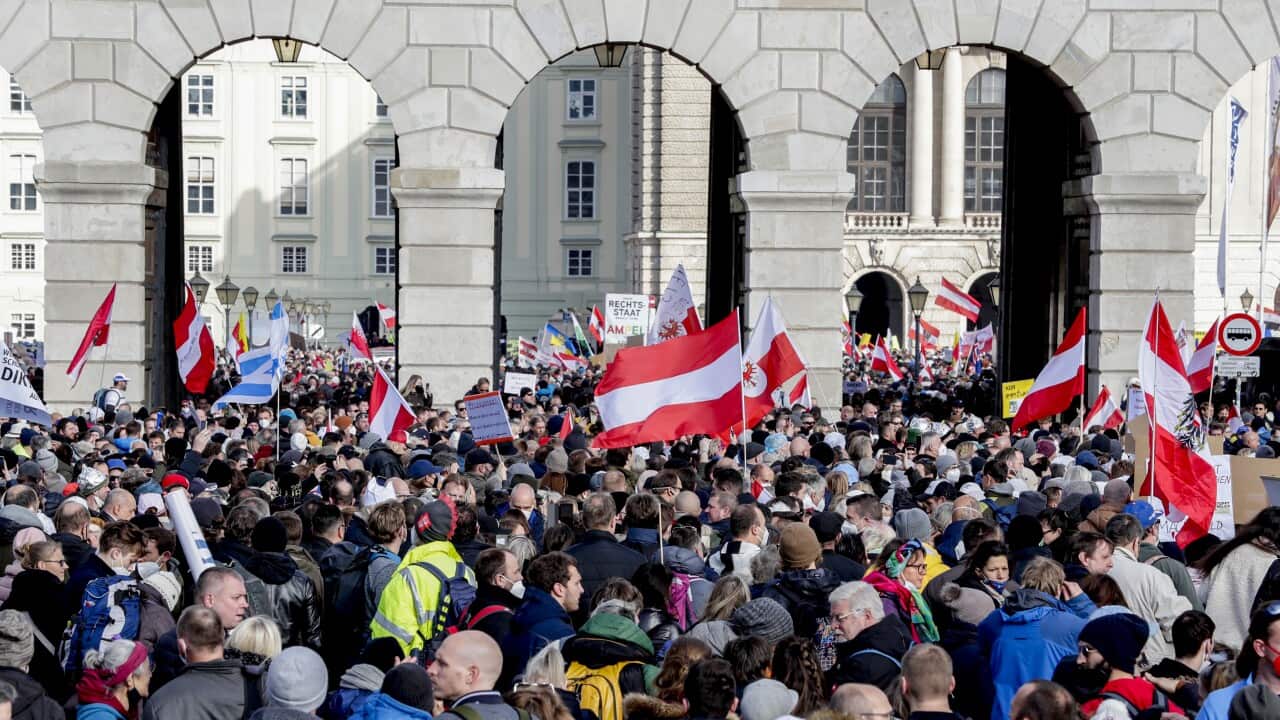 Tens of thousands of protesters gather in Vienna after the Austrian government announced a nationwide lockdown to contain the quickly rising coronavirus cases. Source: AP

Tens of thousands of people have protested in Vienna while unrest has broken out in the Netherlands, with anger mounting against new coronavirus restrictions.

In Austria, the demonstrations came a day after the government announced a new lockdown and said vaccines would be made compulsory next year. Many of the protesters were supporters of the country's far-right Freedom Party, the third-biggest in parliament.

Whistling, blowing horns and banging drums, crowds streamed into Heroes' Square in front of the Hofburg, the former imperial palace in central Vienna, in the early afternoon, one of several protest locations.

Advertisement
Many demonstrators waved Austrian flags and carried signs with slogans such as "no to vaccination", "enough is enough" or "down with the fascist dictatorship".

By mid-afternoon the crowds had swelled to roughly 35,000 people, according to the police, and were marching down Vienna's inner ring road before heading back towards the Hofburg.

A police spokesman said there had been fewer than 10 arrests, for breaches of coronavirus restrictions and the ban on Nazi symbols.

Roughly 66 per cent of Austria's population is fully vaccinated against COVID-19, one of the lowest rates in western Europe. Many Austrians are sceptical about vaccines, a view encouraged by the far-right Freedom Party.

With daily infections still setting records even after a lockdown was imposed on the unvaccinated this week, the government said on Friday it would reintroduce a lockdown on Monday and make it compulsory to get vaccinated as of 1 February.

The Freedom Party (FPO) and other vaccine-critical groups had already been planning a show of force in Vienna on Saturday before Friday's announcement, which prompted FPO leader Herbert Kickl to respond that "As of today, Austria is a dictatorship".

Mr Kickl could not attend because he has caught COVID-19.

"We are not in favour of our government's measures," said one protester, who was part of a group wearing tin foil on their heads and brandishing toilet brushes. Like most protesters who spoke to the media, they declined to give their names, though the mood was festive.

READ MORE
Not just Austria: Which countries have made COVID-19 vaccines mandatory?

Three in hospital after Holland protests

Meanwhile three people were being treated in hospital in Rotterdam on Saturday after they were seriously injured when Dutch police fired shots during a violent protest against COVID-19 measures.

Crowds of several hundred rioters torched cars, set off fireworks and threw rocks at police during the protests on Friday evening. Police responded with warning shots and water canons.

Rotterdam police posted on Twitter on Saturday that 51 people had been arrested, half of whom were under 18.

"Three rioters were wounded when they were hit by bullets, they remain in hospital," police added, in an update after earlier reporting two wounded.

Authorities are investigating the shootings including whether the wounded people where hit by police bullets, they added.

Dutch Justice Minister Ferd Grapperhaus said in a statement the "extreme violence" against police and firefighters in Rotterdam was "repulsive".

"The right to protest is very important in our society but what we saw last night was simply criminal behaviour," Mr Grapperhaus said.

Protesters had gathered to voice opposition to government plans to restrict access to indoor venues to people who have a "corona pass", showing they have been vaccinated or have already recovered from an infection.

The pass is also available to people who have not been vaccinated, but have proof of a negative test.

The announced demonstration was canceled by the organisers because of the riots in Rotterdam, but that did not stop many people from coming to the capital. Source: ANP

In several towns in the Netherlands on Saturday evening there were small pockets of unrest as youths clashed with police.

The Netherlands reimposed some lockdown measures last weekend for an initial three weeks in an effort to slow a resurgence of coronavirus contagion, but daily infections have remained at their highest levels since the start of the pandemic.

The unrest comes as the the World Health Organization voiced concern surrounding the fresh wave of COVID-19 infections spreading across Europe.

Speaking to the BBC, regional director Dr Hans Kluge warned the continent could see 500,000 more deaths by March unless urgent action is taken.

"COVID-19 has become once again the number one cause of mortality in our region," he told the BBC, adding "we know what needs to be done" in order to fight the virus.