A truck has ploughed into a crowded Christmas market in Berlin, killing 12 people and injuring 48 others in what Germany's interior minister said looked like an attack. 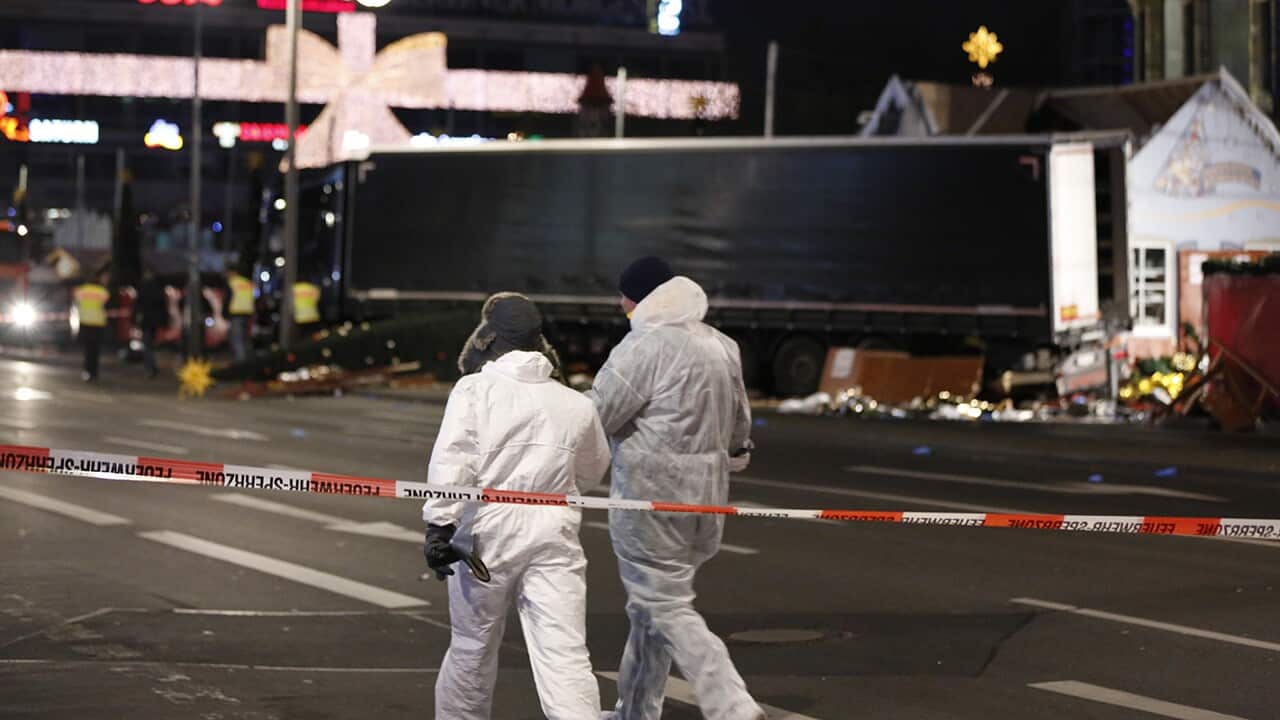 The scene after a truck crashes into a crowded Christmas market at Breitscheidplatz in Berlin-Charlottenburg on the evening of Monday, December 19, 2016.

The suspected driver of a truck that ploughed into a Berlin Christmas market on Monday, killing 12 people and injuring 48 others, was a 23-year-old from Pakistan named in German newspaper Bild.

Citing sources involved in the investigation, Bild added that the man arrived in Germany around a year ago.

The man was reportedly known to police for minor offences, according to a German security source speaking to Reuters.

Advertisement
He was staying at Tempelhof refugee accommodation centre in Berlin, an airport hanger, reportedly searched by police after the crash.

Ambulances and heavily armed police rushed to the area after the vehicle mounted the pavement of the market in a square popular with tourists, in horrific scenes reminiscent of July's deadly truck attack in the French Riviera city of Nice.

German Chancellor Angela Merkel later said it must be assumed to be a "terrorist attack", adding it would be hard to bear if it turned out that a refugee had been the perpetrator.

"There is much we still do not know with sufficient certainty but we must, as things stand now, assume it was a terrorist attack," Merkel told reporters.
"I know it would be especially hard for us all to bear if it were confirmed that (the) person who committed this act was someone who sought protection and asylum," she added.

She promised that every detail would be cleared up and the perpetrator would be punished with the full force of the law.

Berlin police earlier said that investigators assumed it was a deliberate act, calling it "a probable terrorist attack". They requested no photographs be taken as they move the truck.

"Our investigators assume that the truck was deliberately steered into the crowd at the Christmas market at Breitscheidplatz," police said.

Police said they had taken one suspect into custody while a Polish citizen found dead in the truck after it crashed into people gathered around wooden huts serving mulled wine and sausages at the foot of the Kaiser Wilhelm memorial church in the heart of Berlin.

"We want to be very, very cautious and operate close to the investigation results, not with speculation," he told the ARD broadcaster.

The truck's owner, Ariel Zurawski, told Polish broadcaster TVN 24 that the driver, who was his cousin, had been transporting steel to Berlin and had not been reachable since 4pm.

He said he was sure his cousin was not an attacker. "It can't have been my driver," he said. "Something must have happened to him ... I am so shocked."

German police said later they were working on the assumption that the truck had been stolen from a construction site in Poland.

Listen: Deutsche Welle's Jared Reed speaks with SBS journalist Greg Dyett about how the authorities have been very careful in the way they have characterised this incident.

Police understand that the man found dead in the truck was not controlling the vehicle.

The nationality of the suspected driver, who fled the crash scene and was later arrested, was unclear, police said.

German media earlier cited local security sources as saying that there was evidence suggesting the arrested suspect was from Afghanistan or Pakistan and entered Germany in February as a refugee.

The daily Tagesspiegel said the man was known to police but for minor crimes, not links to terrorism.

German authorities said there was no indication of "further dangerous situations in the city near Breitscheidplatz", where the suspected attack took place.

German Chancellor Angela Merkel reacted quickly to the tragedy, with spokesman Steffen Seibert tweeting: "We mourn the dead and hope that the many people injured can be helped."

RELATED READING
'I saw people under the truck': tears and confusion after truck ploughs into Berlin market

Traditional Christmas markets are popular in cities and towns throughout Germany and have frequently been mentioned by security services as potentially vulnerable to attacks.

"It's awful. We were in Berlin for Christmas," said American tourist Kathy Forbes. "We also thought it would be safer than Paris."

The crash happened in the shadow of the Kaiser Wilhelm Memorial Church whose damage in a World War II bombing raid has been preserved as a warning to future generations.

The square is at the end of the Kurfuerstendamm boulevard which was packed with holiday shoppers.

Australian Trisha O'Neill
told the ABC
she was only metres from where the truck smashed into the crowded market.

"I just saw this huge black truck speeding through the markets crushing so many people and then all the lights went out and everything was destroyed.

"I could hear screaming and then we all froze. Then suddenly people started to move and lift all the wreckage off people, trying to help whoever was there."

O'Neill said there was "blood and bodies everywhere".

Police said the truck made it as far as 80 metres (yards) into the Christmas market before it came to a halt.

Europe has been on high alert for most of 2016, with terror attacks striking Paris and Brussels, while Germany has been hit by several assaults claimed by the Islamic State group and carried out by asylum-seekers.

An axe rampage on a train in the southern state of Bavaria in July injured five people, and a suicide bombing wounded 15 people in the same state six days later.

In another case, a 16-year-old German-Moroccan girl in February stabbed a police officer in the neck with a kitchen knife, wounding him badly, allegedly on IS orders.

The arrival of 890,000 refugees last year has polarised Germany, with critics calling the influx a serious security threat.

In response to the Berlin tragedy, France beefed up security at its own Christmas markets.

"The French share in the mourning of the Germans in the face of this tragedy that has hit all of Europe," President Francois Hollande said.

The Nice bloodshed -- as people were watching a fireworks display on the Bastille Day holiday on July 14 -- further traumatised a France already reeling from a series of jihadist attacks.

The United States labelled it an apparent "terrorist attack" and pledged its support.

"Germany is one of our closest partners and strongest allies, and we stand together with Berlin in the fight against all those who target our way of life and threaten our societies," White House National Security spokesman Ned Price said in a statement.

President-elect Donald Trump blamed "Islamist terrorists" for a "slaughter" of Christians in the German capital.

Malcolm Turnbull says authorities are working night and day to keep Australians safe from attacks similar to the one seen in Germany.

"We are very attentive to events internationally to ensure that we learn from them and make sure that we put measures in place to anticipate similar occurrences here," he told reporters in Adelaide on Tuesday.

"Everyone is well prepared to accept to anticipate attacks of this kind," he said.

Rescue workers inspect the scenes and the truck that crashed into a Christmas market, close to the Kaiser Wilhelm memorial church in Berlin Source: DPA

Treasurer Scott Morrison also expressed concern for those involved in the incident.

"It is not a very happy morning with these terrible events in Berlin," Treasurer Scott Morrison told Nine Network. "We are thinking of those families in Berlin and hope that no Australians are affected."

Mr Morrison said the attack was a horrible reminder, especially at Christmas which is supposed to be full of joy, of the evil that's out there in the world.

"I think it's an important thing to do as we go into this Christmas break to count our blessings," he told reporters.

The Australian Embassy in Berlin is making urgent enquiries to determine whether any Australians have been affected by the incident.

A truck which ran into a crowded Christmas market in Berlin, Germany, Monday, Dec. 19, 2016. Source: AAP