Solar and wind-generated power is at the heart of the ACT’s new strategy - and it’s keeping local farmers happy too. 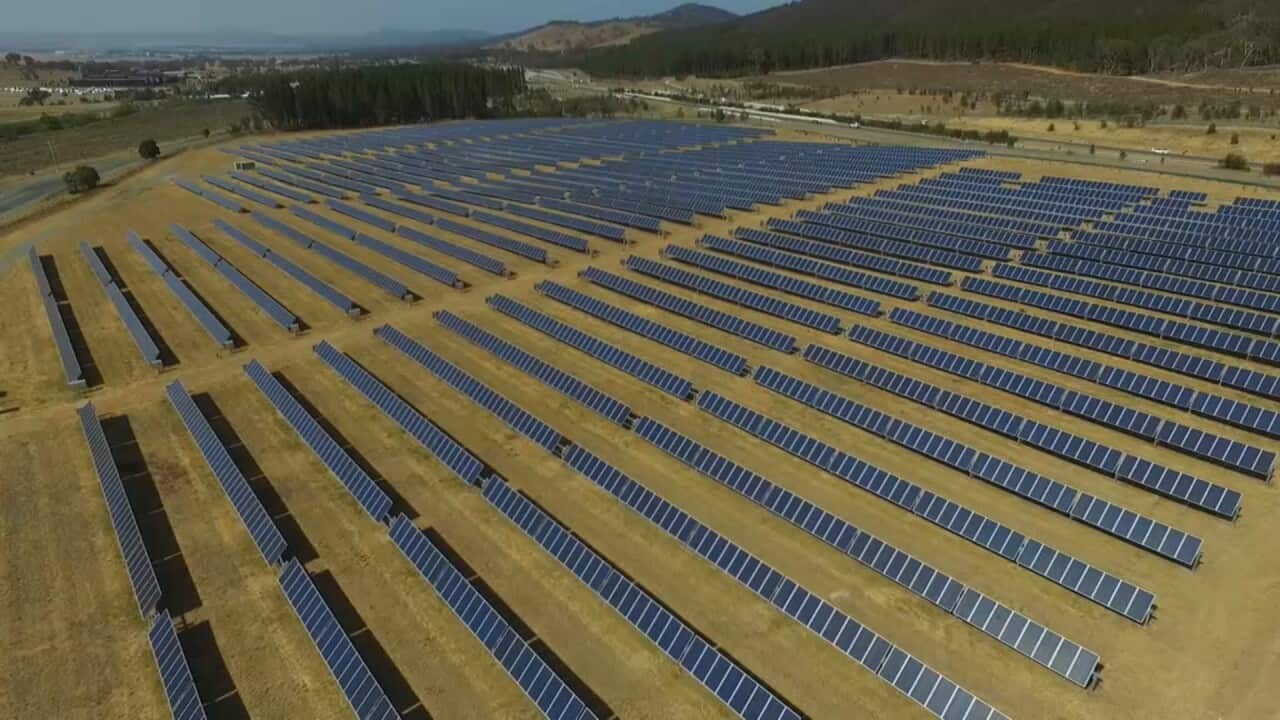 More than 7,000 solar panels line the landscape at one of the ACT’s four solar farms. Source: SBS

From 1 January 2020, the Australian Capital Territory achieves something no other Australian state or territory has.

That makes Canberra only the world’s eighth major city – and first outside Europe – to make the switch.

Advertisement
“I think the national debate about energy and climate change is driven a lot by ideology and belief, rather than the basic facts,” Mr Rattenbury, an ACT Greens party MP, says.

“The ACT is proof positive, that if you make the political decision and get onto it, you can actually get this done.”

The ACT only generates about five per cent of the electricity its residents actually use.

The rest is drawn from the National Energy Market, which is overwhelmingly powered by non-renewable energy sources like coal and gas.

So for every watt of ‘dirty’ energy that Canberra draws from the grid, it pays to feed the same amount of ‘clean’ energy back into the system.

‘No excuse not to get on and do the job’: ACT Climate Change Minister Shane Rattenbury. Source: SBS

While 21 per cent of those payments are mandatory under the national Renewable Energy Target scheme, the ACT government pays the remainder voluntarily, at a cost that is expected to peak next year at around $5.50 per household per week.

The renewable energy the ACT purchases is drawn from solar and wind farms spread across the Territory and four other states.

“Going back about six or seven years, the ACT government made the commitment to start moving to this renewable electricity system,” Mr Rattenbury says.

“We commissioned a series of reverse auctions that were about procuring the power supply we needed to equate to the ACT's annual consumption.”

“We now know that renewables are the cheapest new form of power you can build into the system and the ACT has been able to achieve 100 per cent renewable electricity while maintaining some of the lowest electricity prices in the country.”

Charlie Prell is a fourth-generation grazier in the New South Wales town of Crookwell.

The wind farm – which is in Energy Minister Angus Taylor’s electorate – generates about 300,000 megawatt hours of energy a year, contributing roughly 10 per cent to the ACT’s target.

Mr Prell says it’s a win-win situation because the turbines provide energy security for Canberra and economic insulation for him amid the worsening drought.

“It means the difference between me running a viable farm and me pretty much probably not being a farmer,” he says.

“That wind farm income is underpinning my farming operation, it's a no-brainer.”

“We went through the millennium drought from 2004 to 2009 with no wind turbines and I had to sell land. I had nobody working for me, my wife and I suffered really serious mental health problems, depression, and anxiety.”

“Now, in this drought, which is way more intense than the millennium drought, I have two people working for me permanent part-time.”

“I'm not saying we're not suffering, but we are solid mentally.”

Mr Prell’s workers are benefitting too.

“The two people that work for me are both locals and their mental health is rock solid too because I've guaranteed them that their job is secure through this drought, however long it lasts,” he says.

“The only reason I can do any or all of that is because I'm getting paid a passive income stream to host those wind turbines, which are helping power the ACT.”

Mr Prell said getting planning approval for the turbines was “torturous”, dragging on for years as the political debate about climate change and renewable energy intensified.

“It's really comforting to know that I'm now producing energy, fibre and food and that we're also contributing to the transition from the fossil fuel-based generation to renewables.”

“I don't know why there is such resistance to this thing, but there is.”

“We have the best renewable resources in the world, why are we not taking advantage of them like we did and are with coal?”

The ACT Government says the move to 100 per cent renewable electricity has cut the territory’s emissions by 40 per cent below 1990 levels and now has a legislated target to be carbon neutral by 2045.

“Once we get to 100 per cent renewable electricity, gas and transport become our two big emissions issues, with transport more than 60 per cent of our emissions profile”, Mr Rattenbury says.

That is why the ACT government is already transitioning its car, bus and even fire engine fleet to electric vehicles.

“We're seeing a reduction in running costs of around 80 per cent compared to the petrol cars that the electric vehicles are replacing,” Mr Rattenbury says.

“There's a bit more upfront costs but the running savings are offsetting that over the course of the leasing cycle.”

The even bigger challenge will be transitioning homes and businesses off natural gas.

“Natural gas has been a really important part of the ACT's energy system for a number of years and for a long time we’ve been told it's been the cheap and clean alternative.”

“It's no longer either of those things. It's now just another fossil fuel”.

While a fossil fuel-free grid currently isn’t possible, the minister says it is achievable if states and territories work together with the federal government.

The ACT’s shadow environment minister Elizabeth Lee says Canberra ratepayers are concerned about how much the transition to renewables will cost.

“We want to make sure that any transition to 100 per cent renewable and to zero net emissions by 2045 is going to be sustainable”, she told SBS News.

“And that means sustainable economically and sustainable socially as well as environmental.”

But for grazier Mr Prell, the move to renewables isn’t just inevitable, it’s essential to ensure farming communities like his aren’t further impacted by climate change.

“People need to get out of the way.”

“These are changes we can make – and have begun to make,” Mr Rattenbury says.

“There is no excuse not to get on and do the job.”