The battle to save crumbling Pompeii

The crumbling ruins of Pompeii have for too long been neglected but new management and EU funding are trying to fix past disasters. Can the efforts be kept up? 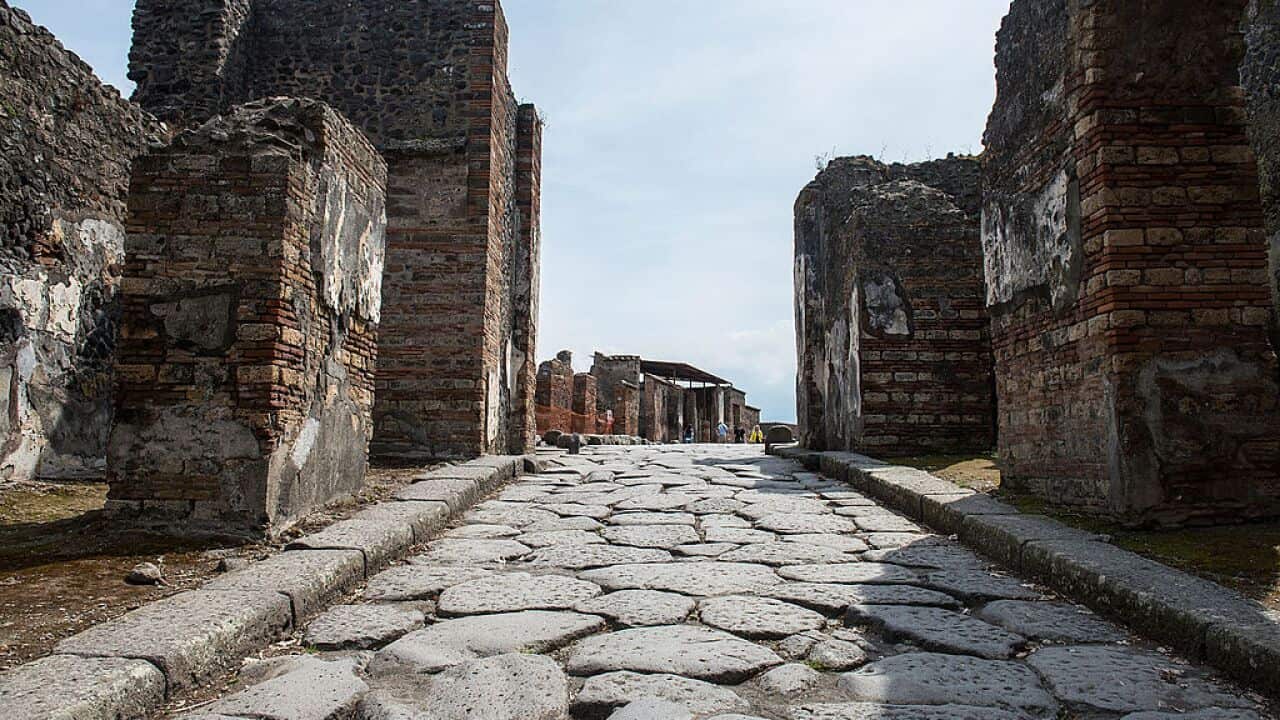 There is a new effort to save the ruins of Pompeii, Italy. Source: SBS

Italy has the world's largest number of UNESCO World Heritage sites and its culture minister likes to say that its monuments are as precious a resource as oil is for Persian Gulf nations.

But for years Pompeii, the Roman city buried when Mount Vesuvius erupted in 79 AD and rediscovered in the 18th century, symbolised the country's inability to look after its treasures.

Things are improving, but it's unclear how long this will last.

Advertisement
"This could have been another Caporetto," Pompeii Superintendent Massimo Osanna told DPA, referring to the World War I battle Italy ignominiously lost against Austria, which has become a byword for national disaster.

A view of the Paquius Proculus domus, one of six houses that were restored as part of the Great Pompeii Project. Source: AAP

Pompeii plunged to its nadir in 2010, when its famous House of Gladiators collapsed after heavy rains. Responding to international outrage, Rome authorities secured 105 million euros ($A160.27 million) from the European Union to shore up the entire site.

Yet when Osanna was appointed in March 2014, the Great Pompeii Project - as the EU-funded scheme was called - had barely gotten off the ground, despite a December 2015 deadline to use up all the grant or face an obligation to return unspent funds to Brussels.

"I thought I was going to a place where I would be chasing windmills like Don Quixote, and colleagues were telling me, 'what made you do it?,'" the 52-year-old archaeologist recalled.

"I don't regret the choice I made, but it was harder than I had imagined."

General Giovanni Nistri, a former head of the national heritage squad of the police military corps, was installed as financial manager of the rescue project in 2013 and is credited for rescuing it.

Nistri told DPA that 25 per cent of planned conservation projects existed only on paper when he took office. He couldn't give reasons why - that's just how it was - but explained what actions he took.

He said he cut short tender procurement procedures from one year to less than a month and connected all available EU money to specific projects, but acknowledged that only about 40 million euros ($A60.58 million) will have been spent by December 31.

The EU had expected Italy to use up all the cash by that date, but since the target will be missed, the expectation is that a fudge will be found to extend the EU scheme by a couple of years.

"It is most likely that the issue will be resolved positively," Nistri said.

UNESCO, which had threatened to declare Pompeii a site at risk of destruction, has recognised the turnaround. In March, an inspectors' report said "excellent progress" had been made under Osanna and Nistri.

Key achievements include a new drainage system in the unexcavated part of the ruins, which should reduce the risk of 2010-style collapses, and a city-wide computer mapping system which should make it easier to detect critical situations.

A tourist walks in the Casa dell'Efebo, one of the six domus reopened to the public in the archeological venue of the ancient Roman town of Pompeii. Source: AAP

"Pompeii is a city, but a city of ruins. And ruins are doomed to crumble. Our job is to keep alive a dead city," Osanna said.

"This means I can't promise that nothing will ever collapse again, especially now that works are ongoing, but not yet completed."

Visiting in early December, amid the tourist low season, I saw a tidy, uncrowded site with plenty of works ahead of the reopening of six restored houses. It gets messier in the summer, when most of the three million annual visitors is concentrated.

Francesco Erbani, a journalist who published a book on the teetering fortunes of Pompeii during the last two decades, said Pompeii was wrecked in the past by bureaucratic mismanagement that may return once its emergency fix is complete.

Speaking to DPA, he listed the confusing overlap of management structures, the lingering risk of infiltration by the local Camorra mafia and strained relations with local municipal and Catholic Church institutions as key challenges.

Even UNESCO inspectors are concerned about the future: they urged the Italian government to make sure Pompeii is adequately staffed and financed "for the foreseeable future," otherwise "the structural failures leading to collapses will recur."

Nistri said the objective was to "turn the extraordinary into the ordinary," meaning the Pompeii rescue project should be followed up by regular, well-planned maintenance work, the kind that was neglected prior to his arrival.

"At least 50 per cent of the Great Pompeii Project has gone right. My wish is that this 50 per cent may be remembered and retained. I am neither hopeful or sceptical: I will observe what happens and draw my conclusions," he said.