From making noise about sexual assault to encouraging others to do so, this is what Grace Tame will be remembered for as her time as Australian of the Year comes to an end. 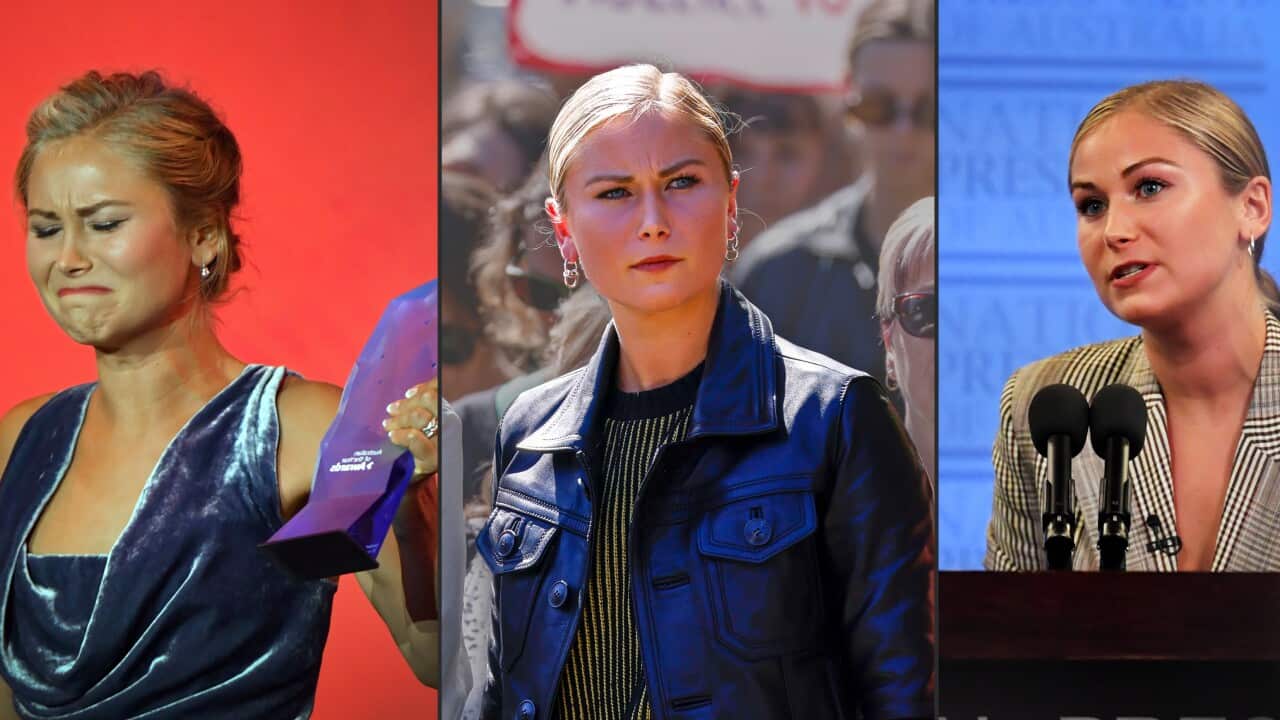 It's been a big year for Grace Tame. Source: AAP/SBS News

This time last year, while Grace Tame was an influential advocate for survivors of sexual abuse and assault - so much so she was named 2021 Australian of the Year (AOTY) - she wasn’t yet a household name.

But 12 months on, that’s all changed, and with her help,
a reckoning around sexual violence
and gender inequality has spread across the country - including to the highest levels of government.

Advertisement
The role previous Australians of the Year have historically played is one of diplomacy and procedure. They stand with the Prime Minister for photos, speak at a number of events, and then, more often than not, quietly continue the important work that got them recognised throughout the year.

But not Ms Tame.

Scott Morrison and Grace Tame during the 2021 Australian of the Year Awards Source: AAP

During her stint as AOTY, she's remained a constant in the news cycle and singled out Scott Morrison - the man who handed her the original award - on multiple occasions.

She’s also come under attack by some sections of the media, been accused of “politicising the position”, and spoken out about how her ascent into the spotlight took a personal toll.

In a message on Twitter this week, with her time as AOTY coming to an end, Ms Tame thanked her followers for their support over the past 12 months.

“Although I didn’t choose the award, I’ll forever be grateful for the honour. Change was made before, is happening now, and will continue- growing in volume, every day,” she wrote.

Here’s a look back at some of the key moments during her time as AOTY.

Many Australians’ first exposure to the Tasmanian would have been her AOTY acceptance speech on 25 January 2021.

She was announced as the award recipient after helping to change the law in Tasmania to allow sexual assault survivors to publicly speak out.

She is a survivor herself - from the age of 15, she was groomed and abused by her maths teacher, who was later jailed for his crimes.

Ms Tame's emotional, powerful speech at the award ceremony in Canberra made people not only sit up and take notice of her but also what she was saying.

"Let's make some noise, Australia," she said on the verge of tears as she held the trophy above her head.

And that’s exactly what the then-26-year-old and other survivors would go on to do.

A few weeks later, another young woman was thrust into the spotlight amid a conversation around sexual assault.

Former federal Liberal Party staffer Brittany Higgins went public in February with allegations she was raped by a male colleague in Parliament House in Canberra in 2019.

She cited seeing Mr Morrison stand next to Ms Tame during the AOTY awards as a reason why she came forward.

"I was sick to my stomach," Ms Higgins told news.com.au. "He's standing next to a woman who has campaigned for 'Let Her Speak' and yet in my mind his government was complicit in silencing me. It was a betrayal. It was a lie."

Ms Higgins said she felt pressured at the time of the alleged incident to choose between her career and reporting the allegation to police.

Mr Morrison later apologised to Ms Higgins over the government’s handling of her allegations.

Ms Tame and Ms Higgins have since become two of the leading voices in Australia around preventing sexual assault and violence.

The pair have become friends and were pictured together multiple times in 2021, including after it emerged Ms Higgins initially hadn’t been invited to the government's two-day National Summit on Women's Safety.

In March, Ms Tame gave perhaps her most memorable criticism of Mr Morrison’s handling of Ms Higgins' allegations. In the days beforehand, Mr Morrison revealed he had spoken with his wife Jenny about it.

"Jenny and I spoke last night and she said to me, 'you have to think about this as a father. What would you want to happen if it were our girls?'" he said.

Asked about Mr Morrison's response by an SBS News journalist at the
National Press Club
, Ms Tame said: “It shouldn't take having children to have a conscience.”

“And actually, on top of that, having children doesn't guarantee a conscience.”

With her new platform, Ms Tame received various offers from artists to paint her for the Archibald Prize, seen as the most prestigious portrait competition in Australia.

But it was Sydney artist Kirsty Neilson, who worked with survivors of sex trafficking in Cambodia, who stood out.

It was a "no brainer,"
Ms Tame told SBS News
last year. "When I looked at Kirsty’s work, I saw the raw emotion that stood out. I also have an eye for authenticity and integrity. Those are two of my highest values."

“Grace is so victorious, in my eyes. She is the voice of 2021,” Neilson said. “She is doing so much good and creating so much change. I wanted to show her passion and her determination as a young female who had been through so much horror, and is still coming out the other side.”

For all the accolades she received through 2021- including being named among TIME magazine’s ‘Next Generation Leaders’ - December’s launch of the Grace Tame Foundation may end up having the biggest lasting effect.

The Foundation is a not-for-profit organisation that campaigns for and helps fund initiatives to prevent and respond to sexual abuse of children and others. Statistics show one in five Australian children experience sexual abuse.

“We’re looking to support other programs that align with the cause, and other organisations, and partner and network, and really just look for all the gaps that there are in the sector and try to create more unity and change in general,” Ms Tame told the Seven Network in December.

The organisation's first initiative, the ‘Harmony Campaign’, aims to establish nationally-consistent laws around sexual assault and remove loopholes that can be exploited by perpetrators.

Australia's National Summit on Women's Safety aimed to bring together hundreds of advocates, experts and survivors to help shape the federal government's next national plan to reduce violence against women and children.

Mr Morrison opened the summit with a
keynote address
in which he conceded Australia is failing to do enough to protect women from domestic and sexual violence.

Grace Tame was not available for interview for this article.


The next Australian of the Year will be announced in Canberra on 25 January.
See all the finalists here.