More than 18 months on from the Christchurch mosque attacks - and just days before New Zealand's election - the emergence of far-right fringe parties in the country is sparking fresh concerns for some. 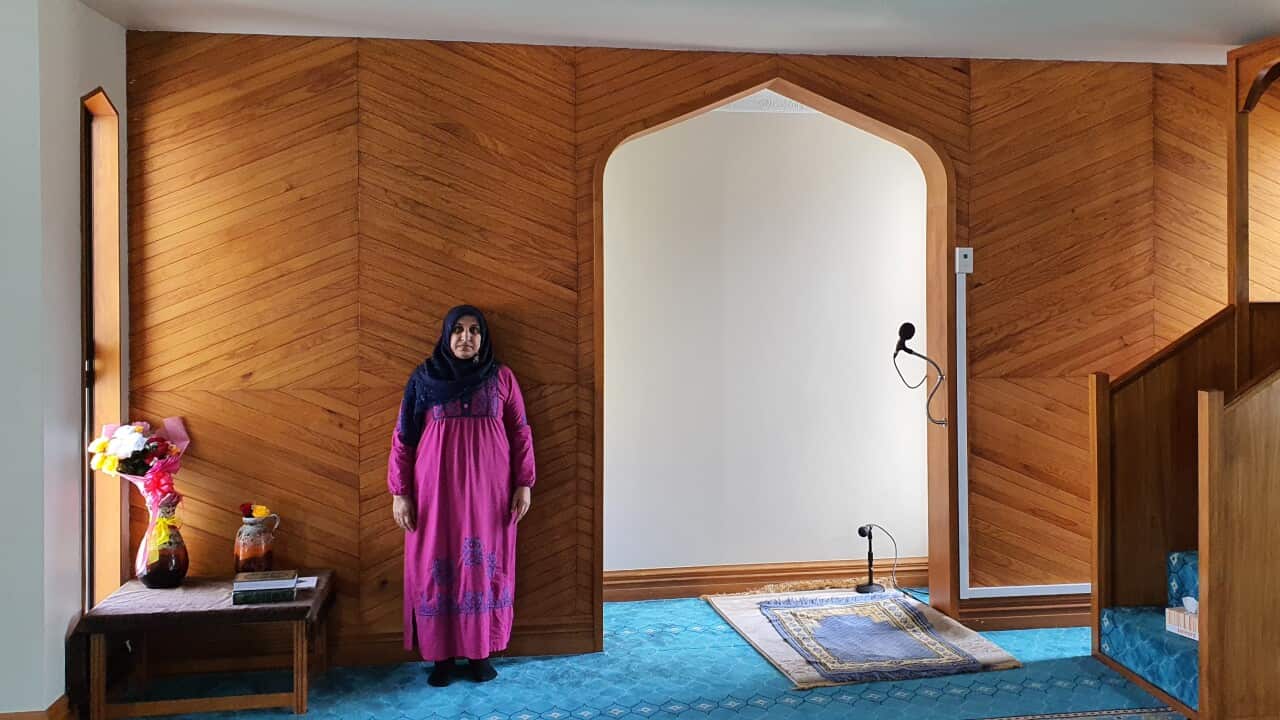 In September, Anjum Rahman visited the Al Noor mosque for the first time since the attacks. Source: Supplied

Ms Rahman, a Muslim activist, detailed how for years she and others had "begged and pleaded ... demanded" the government address "rising levels of discrimination" in the country.

“We had come off the back of a few years of intense advocacy with governments, of meeting after meeting, of raising our issues, of trying to get them to take it seriously,” she told SBS News this week.

Advertisement
“To have this happen after all of that effort, and to have no warning, the lack of preparedness, it felt devastating.

“I heard one of the [survivors] say recently they thought it was a betrayal.”

A
recent study by the University of Auckland
found hate crimes against Muslims in New Zealand spiked in the aftermath of the massacre, making the country "more, not less, dangerous for Muslims and other minorities".

“For a lot of people there is still a concern," Ms Rahman said.

"A woman reported sitting near the door of a bus to be able to get out quickly. All these other little things they do because they never know, there is still that fear.”

A woman reported sitting near the door of a bus to be able to get out quickly ... there is still that fear.

The emergence of far-right fringe parties in the country's election campaign is also doing little to stem their anxieties.

Sociologist Paul Spoonley, an expert on New Zealand's far-right, said such parties are gaining a narrow but alarming degree of support.

“There are four groups in particular, and combined they're not getting more than one to two per cent of the vote," he said.

"[But] we are starting to see some of the views of the extreme right beginning to migrate into this extremely conservative political fringe and get a much larger audience. I still don't think it's a large audience - a few per cent of the population - but it's still very concerning."

Ms Rahman fears in today's climate of misinformation, their support base could grow.

"It's great it's not resonating politically, but it is resonating on Facebook and [they] are building a following," she said.

READ MORE
'We owe it to the 51 victims': How young Muslims led conversations around racism post-Christchurch

"If you go on [their] Facebook pages, comments are addressing immigration and Muslims," she said.

But, Ms Danzeisen stressed, the majority of New Zealanders are not buying into the rhetoric.

"I find this year's election to be quite inspiring. The vast majority of people are embracing kindness and inclusion."

Voice for the underrepresented

Ibrahim Omer's tilt at politics was inspired by the Christchurch mosque attacks.

The refugee from Eritrea is one of just a few Muslims vying for a seat in New Zealand's highest level of government.

"I really wanted to step up and do my bit in stamping out racism, because we still have issues with racism," he said.

Source: Ibrahim Omer, a refugee from Eritrea, is standing as a Labor candidate in the New Zealand's election.

"The time has come to take that to the next level and have our own voices inside the chamber and speak up against racism and prejudice."

Mr Omer said the rise of the far-right is playing on the minds of minority communities.

"It does concern us big time because, at the end of the day, we are the target. In the last three to four years we have seen it from day to day, year to year. It's only going to get worse unless we all as a human race, whether we are black, brown, white, come together and call it out."

It's only going to get worse unless we all as a human race ... come together and call it out.

And while they lack meaningful political support, he said they cannot be dismissed as a powerless.

"I think that is absolutely a feature of this campaign that we have not seen before, and it would be unwise on our part to dismiss it and suggest that the fact that it is not being expressed in voting patterns is cause for being complacent."

Professor Shaw said he believes the Christchurch attacks, along with the COVID-19 pandemic, may have created a fertile ground for the emergence of such groups.

"My sense is that Christchurch would have had something to do with it, but the pandemic has really amplified it because I think people are sitting at home ... they find new rabbit holes disappear down."

“I think the pandemic injected a degree of anxiety into the community and some of those views, views about conspiracy and that the pandemic is a hoax, have begun to appear.”

On Saturday,
New Zealand will vote to elect its 53rd parliament
.

The Christchurch attacks were a defining moment for the nation's youngest-ever prime minister.

Just six days after the massacre, the now 40-year-old announced a ban on military-style semi-automatic and assault rifles, less than a month later the new gun laws passed through parliament, and after two months Ms Ardern launched a global campaign to tackle terrorist and violent extremist content online.

Her swift actions were praised by the Islamic community but some feel there one crucial issue she is yet to conquer - religious hate speech.

It's something Gamal Fouda, the Imam who was giving a sermon at the Al Noor mosque at the time of the massacre, sees as Ms Ardern's next challenge, assuming she holds onto power.

Hate speech laws are covered by New Zealand's Human Rights Act but only refer to race, colour and ethnicity - not religion.

In September, Ms Ardern visited Christchurch for the first time since the August sentencing of the Australian terrorist. There, she vowed to bolster the legislation if re-elected.

It was a request made by Mr Fouda when he met with Ms Arden during her visit.

She said she had hoped to make the changes sooner but Labour "hadn't been able to deliver that last term".

New Zealand is currently governed by a coalition of three parties; Labour, the Greens and the populist New Zealand First, which is led by the Deputy Prime Minister, Winston Peters.

“The government have been stymied in trying to introduce something which would deal with hate speech by one of its coalition partners, New Zealand First,” Professor Spoonley said.

“The polls do seem to suggest that it’s likely to be a Labour-Greens government. So if [that is the case] I would anticipate a very rapid move to introduce hate speech legislation in New Zealand.”

Ms Rahman acknowledges that progress in protecting communities since the mosque attacks has been made, but she too believes more can be done.

“I think where the holdup has been is around legislation," she said.

"I am hoping with the next government there is more will and impetus to make the changes that are really necessary.”