The three justices found it was open for the minister to "infer that it was perceived by the public that Novak Djokovic was not in favour of vaccinations". 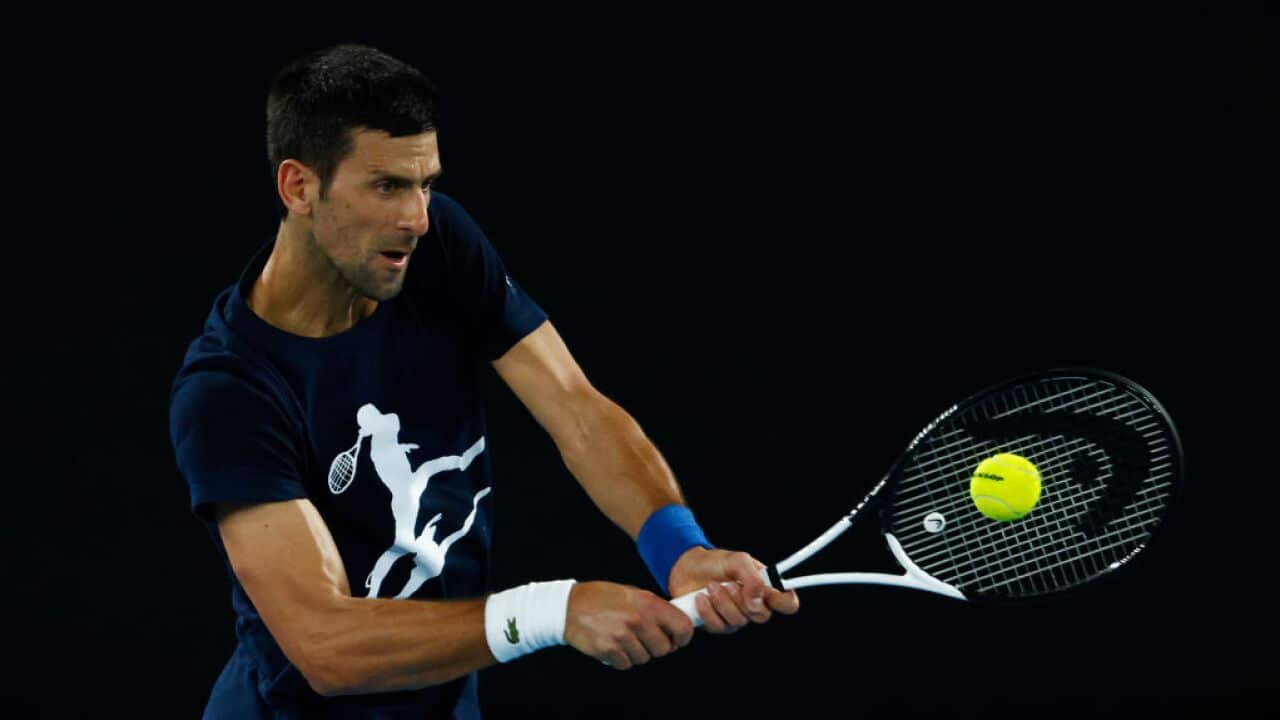 Novak Djokovic plays a backhand during a practice session ahead of the 2022 Australian Open at Melbourne Park on 14 January 2022. Source: Getty

The Federal Court has handed down its reasoning for upholding Immigration Minister Alex Hawke's cancellation of Novak Djokovic's visa.

The three justices - Chief Justice Allsop, Justices Besanko and O'Callaghan - published their judgement on the Federal Court website on Thursday.

In it, they noted that Mr Hawke has the power to cancel a visa if he is satisfied that a ground for cancellation under section 116 of the Migration Act exists and that it would be in the "public interest" to do so.

Advertisement
Under section 116 of the Act, the minister is able to cancel a visa if "the presence of the visa holder in Australia is... may be, or might be, a risk to the health, safety or good order of the Australian community or a segment of it".

The justices found it was "open to infer that it was perceived by the public that Mr Djokovic was not in favour of vaccinations".

They noted that Djokovic's views in regards to vaccination "were expressed and publicly known even before there was a COVID-19 vaccine".

They referred to a BBC article in which Djokovic was quoted in April 2020 as saying he was "opposed" to vaccination but that he would keep an "open mind".

The justices said it "was plainly open to the Minister to infer that Mr Djokovic had chosen not to be vaccinated because he was opposed to vaccination or did not wish to be vaccinated".

The justices argued it was common sense that "an iconic world tennis star may influence people of all ages, young or old, but perhaps especially the young and the impressionable, to emulate him".

"This is not fanciful; it does not need evidence," they added.

The justices deemed it was not a long shot for the minister to conclude that Djokovic's presence in Australia could spark anti-vaccine demonstrations.

“Mr Djokovic is a hero and an icon of freedom of choice in relation to being vaccinated," they said.

"It was not irrational for the Minister to be concerned that support of some anti-vaccination groups ... may encourage rallies and protests that may lead to heightened community transmission.”

It comes after the court delivered its initial judgement on Sunday, ruling in the minister's favour and ordering him to pay the government's legal costs.

He said he cancelled the visa over concern that as a "high profile unvaccinated individual" Djokovic could "foster anti-vaccine sentiment" and "civil unrest" if he was allowed to stay in Australia.

Djokovic spent a short time detained in Melbourne's Park Hotel where 32 asylum seekers and refugees have been locked up for more than eight years by the federal government.

He was later released from detention following Sunday's court hearing and deported to Serbia.

In a statement, Djokovic said he was "extremely disappointed" by the Federal Court's decision to uphold his visa cancellation.

"It's now time to get on with the Australian Open and get back to enjoying tennis over the summer," he said.