There are believed to be tens of thousands of unlawful migrants in Australia. Often hesitant to seek medical care due to fears of deportation, and living together in overcrowded accommodation, those supporting them say they are particularly vulnerable during the COVID-19 pandemic. 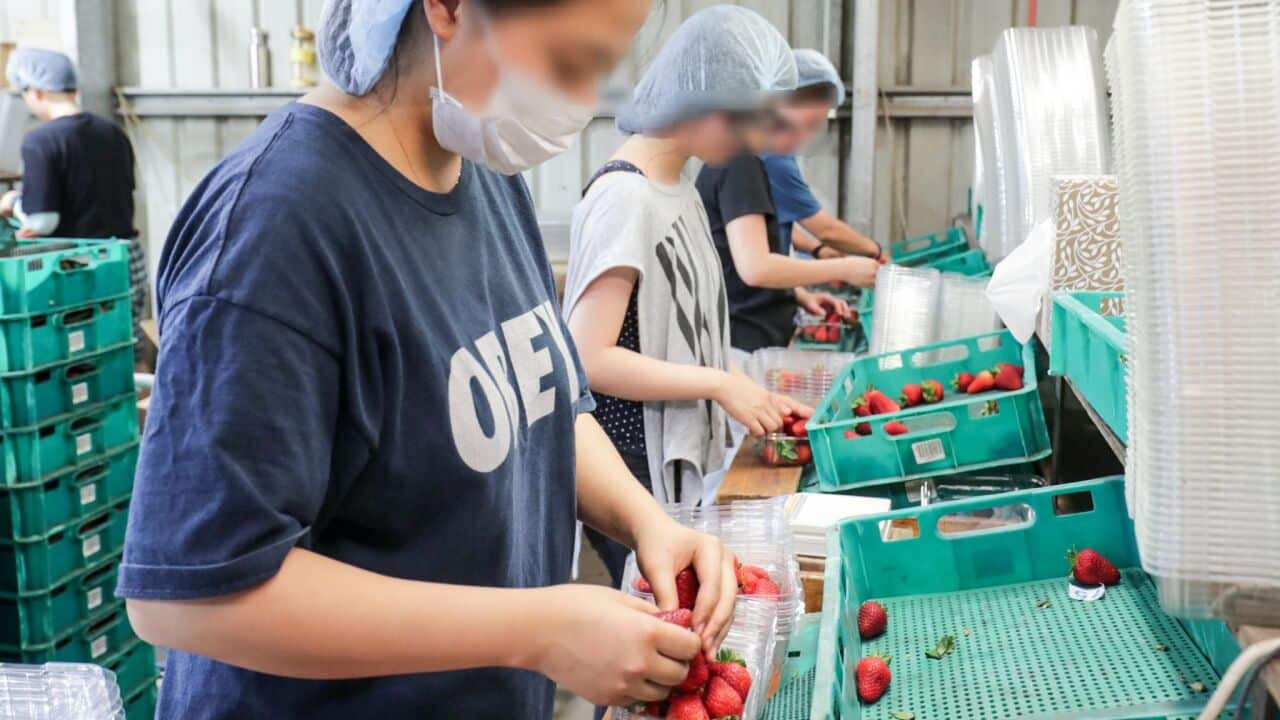 Those advocating for unlawful migrants (not pictured) say they are often employed on Australian farms. Source: AAP

Tens of thousands of unlawful migrants in Australia are at risk of destitution and being unable to access adequate healthcare during the coronavirus pandemic, advocates have warned amid calls for greater protections for non-citizens.

The Federal Government has previously estimated that
more than 64,000 illegal migrants
are currently living and working in Australia, the vast majority who have overstayed their visa, but the true number of people slipping under the radar is unknown.

It is because of this invisibility that advocates say this group will be particularly hard hit by the impacts of COVID-19. Without the legal right to be in Australia, undocumented migrants are unable to access welfare payments if their work is cancelled and are not entitled to Medicare.

Advertisement
Many also fear they will be asked about their visa status if they seek out healthcare, leading to concerns the virus could spread unchecked.

Mohamed*, who arrived in Australia on a tourist visa from Malaysia in 2013, told SBS News he has previously struggled to access medical care for his asthma and is worried about what will happen if he contracts COVID-19.

“Two or three years ago I had a really bad asthma attack and I tried to go to the hospital but they said I had to pay $400 because I didn’t have Medicare,” he said. “I feel like it’s hard for me if I was infected [with COVID-19], it’s difficult.”

For many years after he overstayed his visa, Mohamed - who is in his 20s - worked unlawfully on farms, often picking fruit for which he was paid as little as $1.20 a box.

“I’ve been lawful, then unlawful, then lawful again,” he said, adding that he came to Australia because he was told he would be able to make money to support his family.

Mohamed is now on a Bridging Visa E while his claim for asylum is assessed, but continues to work unlawfully in regional Victoria where he is paid below minimum wage. He makes just enough money to afford the rent for his accommodation - which he shares with four other people - and groceries.

“When people think of undocumented as a status … they think of places like the US or Europe with land borders that mean people can enter one place or another without formal papers. Australia’s immigration system operates in such a way that it bestows status and then has various ways of removing it,” Ms Verma said.

It means the vast majority of unlawful migrants in Australia are people who have overstayed their temporary visa, with estimates about the size of this group “at best, extremely vague”, Ms Verma said.

In 2017, a Senate committee heard there were an estimated 64,600 people who had overstayed their visa in Australia. Of these, 6,600 had been in the country for between 15 and 20 years.

But Ms Verma and Monash University Associate Professor Marie Segraves, who published a study investigating the experience of unlawful workers in Australia, believe the number could be significantly higher and potentially growing.

“With the current public health crisis, all sorts of analysis and reporting in the immigration space is suggesting that because of how slow and partial the government’s response has been, the pool of people who are undocumented in Australia and literally marooned here without status … is going to exponentially grow,” Ms Verma said.

Due to the precarious nature of unlawful work, for which illegal migrants are often underpaid, Dr Segrave said many illegal migrants live in overcrowded accommodation, meaning social distancing is impossible.

“Most of the workers I had contact with who are working in these kinds of conditions with this status, are living with many other people, but also tend to be moving around a lot because they are looking for work opportunities,” she said.

“So those two things are of critical concern in terms of a public health perspective.”

The situation is complicated by the fact that many industries that are suspected of hiring significant numbers of unlawful workers are essential industries.

A
University of Adelaide report
, published in 2019, found many Australian farmers were having to choose between hiring unlawful workers or leaving their crops to fail. “Poor labour standards and worker exploitation have become established norms in pockets of the horticulture market,” the report read.

“All of these nodes of the economy that need to keep moving during the pandemic are critically held together by people who do not have formal visa status or who have formal status that’s about to run out and have nothing further lined up.”

There are also concerns that as industries feel the economic effects of the pandemic, they will become more reliant on unlawful workers who are forced to accept lower wages and poor conditions.

“I think there is the potential for that kind of exploitation to continue, and potentially increase,” Dr Segrave said. “And those workers will be even less incentivised to seek any kind of help because of the lack of other work available.”

Ms Verma’s group has so far raised more than $41,000 via an online fundraiser for an emergency fund to support undocumented migrants who find themselves without income during the pandemic.

The group is also calling for a guarantee that migrants will be able to access medical care regardless of their visa status.

Victoria, New South Wales and Western Australia have temporarily waived the cost of COVID-19 treatment for non-citizens who do not have travel insurance, but advocates say this doesn’t go far enough to combat the fear many feel about coming forward.

“Even within Victoria, the rollout of increased testing requires some careful community-based discussion and advocacy to let people know that when that happens no one is going to be asking about your visa status,” Dr Segrave said, “because we want people coming forward”.

“If there are literally no flights and they are concerned that their visa is coming to an end,” he said, “then they should call the immigration department as a matter of urgency."

A spokesperson for the Department of Home Affairs said: "Everyone in Australia, regardless of their visa status should abide by current health guidelines and seek treatment and testing if they are unwell".

They also urged anyone in Australia unlawfully to come forward and discuss their situation as soon as possible.