'The light at the end of the tunnel': Moderna says its coronavirus vaccine is 94.5 per cent effective

Global hopes of overcoming the coronavirus pandemic were boosted after a second vaccine was found to be nearly 95 per cent effective in a trial. 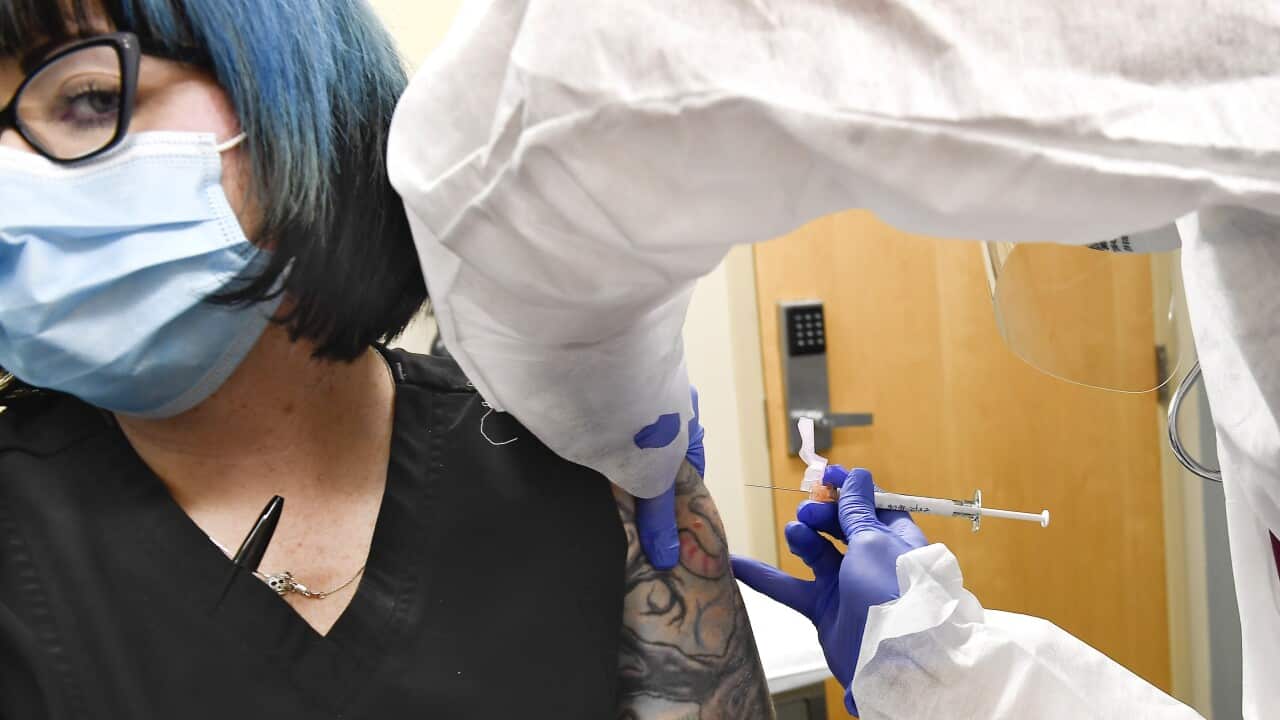 Melissa Harting of Harpersville, New York participates in a study of the vaccine for COVID-19 developed by the National Institutes of Health and Moderna. Source: AAP

Moderna’s experimental vaccine is 94.5 per cent effective in preventing COVID-19 based on interim data from a late-stage trial, the company said on Monday, becoming the second US drugmaker to report results that far exceed expectations.

Together with Pfizer’s vaccine, which is also more than 90 per cent effective, and pending more safety data and regulatory review, the United States could have two vaccines authorized for emergency use in December with as many as 60 million doses of vaccine available this year.

The vaccines, both developed with new technology known as messenger RNA (mRNA), represent powerful tools to fight a pandemic that has infected 54 million people worldwide and killed 1.3 million.

Advertisement
Unlike Pfizer’s vaccine, Moderna’s shot can be stored at normal fridge temperatures, which should make it easier to distribute, a critical factor as COVID-19 cases are soaring, hitting new records in the United States and pushing some European countries back into lockdowns.

“We are going to have a vaccine that can stop COVID-19,” Moderna President Stephen Hoge said in a telephone interview.


The World Health Organization chief hailed the "encouraging" news about COVID-19 vaccines but expressed concern about surging cases in many countries and insisted that complacency was not an option.

"We continue to receive encouraging news about COVID-19 vaccines and remain cautiously optimistic about the potential for new tools to start to arrive in the coming months," WHO chief Tedros Adhanom Ghebreyesus told a virtual press briefing.

But he added: "This is no time for complacency."

“The vaccine is really the light at the end of the tunnel,” Dr. Anthony Fauci, the top US infectious diseases expert said. He urged Americans not to let their guard down and to continue washing hands and being vigilant about social distancing.

READ MORE
Australia is 'on track' to deliver a coronavirus vaccine by March next year, Greg Hunt says

Even with fast authorisation, the vaccines will not come in time for most people celebrating the US Thanksgiving and end-of-year holidays, when families and friends come together - just the types of gatherings public health officials warn against.

The company’s shares, which have more than quadrupled this year, jumped 8 per cent, while European and US stocks rose. The benchmark S&P 500 rose 1 per cent, while the pan-European STOXX 600 climbed 1.3 per cent.

Shares in Pfizer and its partner BioNTech, whose vaccine must be transported at far colder temperatures, fell 4.3per cent and 16.4per cent respectively, while Britain’s AstraZeneca, which has yet to release any results from its late-stage vaccine trials, was down 1per cent.

Moderna’s data provide further validation of the promising but previously unproven mRNA platform, which turns the human body into a vaccine factory by coaxing cells to make virus proteins that the immune system sees as a threat and attacks.

Moderna expects the vaccine to be stable at normal fridge temperatures of 2 to 8 degrees Celsius for 30 days and it can be stored for up to 6 months at -20C.

Pfizer’s vaccine must be shipped and stored at -70C, the sort of temperature typical of an Antarctic winter. It can be stored for up to five days at standard refrigerator temperatures, or for up to 15 days in a thermal shipping box.

The data from Moderna’s trial involving 30,000 volunteers also showed the vaccine prevented cases of severe COVID-19, a question that still remains with the Pfizer vaccine. Of the 95 cases in Moderna’s trial, 11 were severe and all 11 occurred among volunteers who got the placebo.

Moderna, part of the US government’s Operation Warp Speed program, expects to produce about 20 million doses for the United States this year, millions of which the company has already made and is ready to ship if it gets FDA authorisation.

“Assuming we get an emergency use authorisation, we’ll be ready to ship through Warp Speed almost in hours,” Mr Hoge said. “So it could start being distributed instantly.”

READ MORE
Trust in vaccines vital to halting pandemic: WHO

The 95 cases of COVID-19 included several key groups who are at increased risk for severe disease, including 15 cases in adults aged 65 and older and 20 in participants from racially diverse groups.

“We will need much more data and a full report or publication to see if the benefit is consistent across all groups, notably the elderly, but this is definitely encouraging progress, said Stephen Evans, professor of pharmacoepidemiology, London School of Hygiene & Tropical Medicine.

The trials were designed to measure whether the vaccines stop people from getting sick rather than whether they prevent transmission, which remains to be tested.

“It is likely that vaccines that prevent symptomatic disease will reduce the duration and level of infectiousness, and thus reduce transmission, but we don’t yet know if this effect will be large enough to make any meaningful difference to the spread of the virus within communities,” said Eleanor Riley, professor of immunology and infectious disease at the University of Edinburgh.

A nurse prepares an experimental vaccine for COVID-19 developed by the National Institutes of Health and Moderna Inc. at the United Health Services facility. Source: AAP

Most side effects were mild to moderate. A significant proportion of volunteers, however, experienced more severe aches and pains after taking the second dose, including about 10 per cent who had fatigue severe enough to interfere with daily activities while another 9 per cent had severe body aches. Most of these complaints were generally short-lived, Moderna said.

“These effects are what we would expect with a vaccine that is working and inducing a good immune response,” said Peter Openshaw, professor of experimental medicine at Imperial College London.

The US government, faced with the world’s highest known number of COVID-19 cases, could have access next year to more than 1 billion doses from Moderna and Pfizer, more than needed for the country’s 330 million residents.

The Trump Administration has mainly relied on the development of vaccines and treatments as its response to the pandemic. Moderna has received nearly $1 billion in research and development funding from the US government and has a $1.5 billion deal for 100 million doses. The government has an option for another 400 million doses.

The company hopes to produce between 500 million and 1 billion doses in 2021, split between its US and international manufacturing sites, depending in part on demand.

Europe’s health regulator said on Monday it had launched a real-time “rolling review” of Moderna’s vaccine, as it has done for vaccines from Pfizer and AstraZeneca. Brussels also said it was in talks with Moderna about securing doses.

Other countries such as China and Russia have already begun vaccinations. Russia licensed its Sputnik-V COVID-19 vaccine for domestic use in August before it started large-scale trials. It said on 11 November that its vaccine was 92 per cent effective based on 20 infections in its large trial.