With more children at home in Australia due to the coronavirus restrictions, health and exercise experts say continuing extra-curricular activities remotely is essential to maintain good mental health. 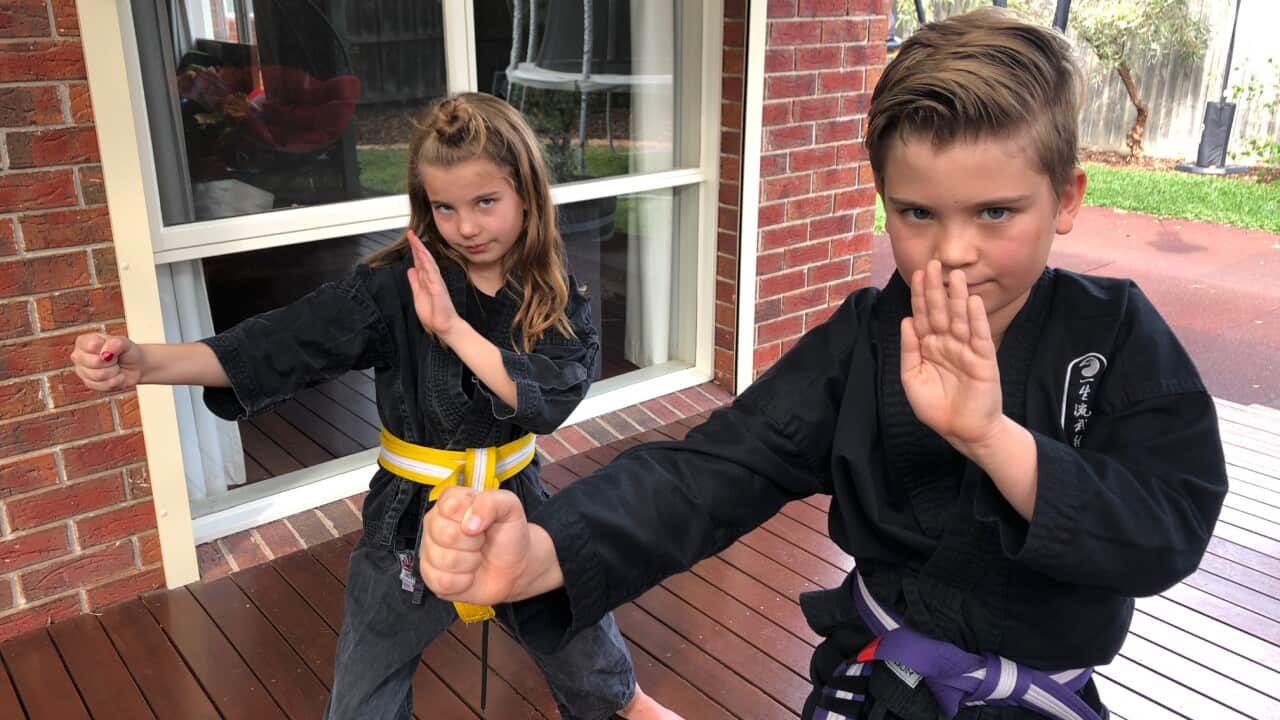 Phoebe and Owen have been continuing their martial arts classes at home. Source: SBS/Abby Dinham

For more than 40 years, pre-school education program Gymbaroo has operated on a strict no-screen policy for kids under three, until now.

Sitting in what’s usually a bustling playroom in Plenty, north of Melbourne, Gymbaroo presenting veteran Helen Woodman holds a babydoll as she runs through the class exercises while facing a video camera.

Last month, as social distancing restrictions came into force, Gymbaroo began broadcasting classes for parents and their newborns, through to school-age children, via an online portal.

Advertisement
Gymbaroo director Dr Jane Williams says the classes are vital to child development and that shouldn’t be disruptive by COVID-19.

“The online program keeps children active, gives parents ideas, and really helps build on the developmental foundations that children will need when we come out the other side of this,” she tells SBS News.

Gymbaroo operates in every state, mainly in suburbs around capital cities, hosting thousands of children and parents each week for learning and exercise programs.

But Dr Williams says taking Gymbaroo, and for the older kids, Kindyroo, online has for the first time given families in remote and regional Australia a chance to participate.

“In actual fact, we’re able to reach a lot more families with the online format, and while online isn’t perfect for the type of program we run, it means we can actually give a lot more activity ideas and a lot more support to families who normally don’t get an opportunity to experience them.”

It is support she says can be vital, particularly for new mums.

Megan and her children take part in the Kindyroo and Gymbaroo classes each week. Source: Supplied

Queensland mum Megan participates in the online program every week with and 17-month-old Williams and four-year-old Elizabeth.

She says continuing to follow the classes each week has given her children a sense of structure amid the isolation measures.

“It maintains a bit of our routine in the Kindyroo, Gymbaroo classes that Elizabeth has been doing since she was 10 weeks old. It gives them something to look forward to in our schedule, which is very empty now.”

Operations manager of the not-for-profit club Tammy Robinsons says she was heartbroken to stand down her staff due to the COVID-19 restrictions.

But she says coaches, such as Thomas Daddow who presents online tutorials, were quick to volunteer their time in an effort to support their students and other children who love gymnastics through an uncertain time.
Source: SBS/Abby Dinham

“We wanted to give them some sense of stability and things going on as normal, so they can recognise familiar faces, do familiar activities, and have some fun.”

Makayla Gorgioski is seven years old but already has her sights set on an Olympic debut.

She follows the classes every day from home before beginning the day’s schoolwork and hopes to follow in the footsteps of her idol.

READ MORE
What exercise is and isn't allowed under Australia's coronavirus rules?

"My favourite gymnast is [the retired Romanian Olympic champion] Nadia Comăneci because she got the first perfect 10.”

Martial arts for the mind

South-west of Melbourne, the Martial Journey academy of martial arts stopped its in-person classes a week before the state government directive to launch its Virtual Learning Program.

Sensei Chris Oakley has taught martial arts for almost 30 years and says the program is about promoting activity for a healthy body and a healthy mind.
Source: SBS/Abby Dinham

“Martial arts has that sort of muscle memory that radiates not only through the muscles, but the mind and soul. We feel that with plenty of activity the kids can become more active not only physically but mentally,” he says.

For nine-year-old purple-belt Owen, following the classes online provides a good excuse for a break from homeschooling, but he says, it’s not as good as the real thing.

“At martial arts, it gets my blood pumping, but I miss the dojo [the space in which martial arts are practised] because I get to go around and say hi to my friends.”
Source: SBS/Abby Dinham

While seven-year-old yellow-belt Phoebe also misses the social aspect of attending the classes, she says participating online is better than missing out on martial arts altogether.

“I miss the dojo because I have lots of friends in the dojo, it’s more fun.”

Adapting to a new routine

As well as providing parents with a break from entertaining the children during the COVID-19 restrictions, experts say online classes and programs are vital to supporting children’s mental health during the pandemic.

Dr Kimberly O’Brien is a child psychologist at Quirky Kids in Sydney. She says there has been a significant increase in the number of referrals at her clinic in recent weeks.

“Mostly from parents checking in on whether or not they should send their kids back to school in term two, or if they should push their kids to do their online learning when they’re not feeling motivated to do it."

"I’d say we’ve had about a 50 per cent increase in referrals for anxiety in the last fortnight.”

The changes have created particular challenges for households with children on the autism spectrum.

CEO of Autism Awareness Australia Nicole Rogerson says while each child is different, changing the daily routine or even the brand of foods they like can be upsetting for kids on the spectrum.

“A lot of kids on the autism spectrum crave routine and understanding in a world that’s a bit confusing for them. It’s really important that routines are kept in place, but at the moment we know that no one has a routine and everything has changed.”

While too much screen time is still not encouraged, for now, it is hoped online classes and programs will help children feel they’re not alone in isolation.

Owen and Phoebe are the writer's children.