The outback artists hoping to share their creations with the world

In a remote Aboriginal community near Coober Pedy in the South Australian desert, a decades-long dream of an art centre is finally being realised. 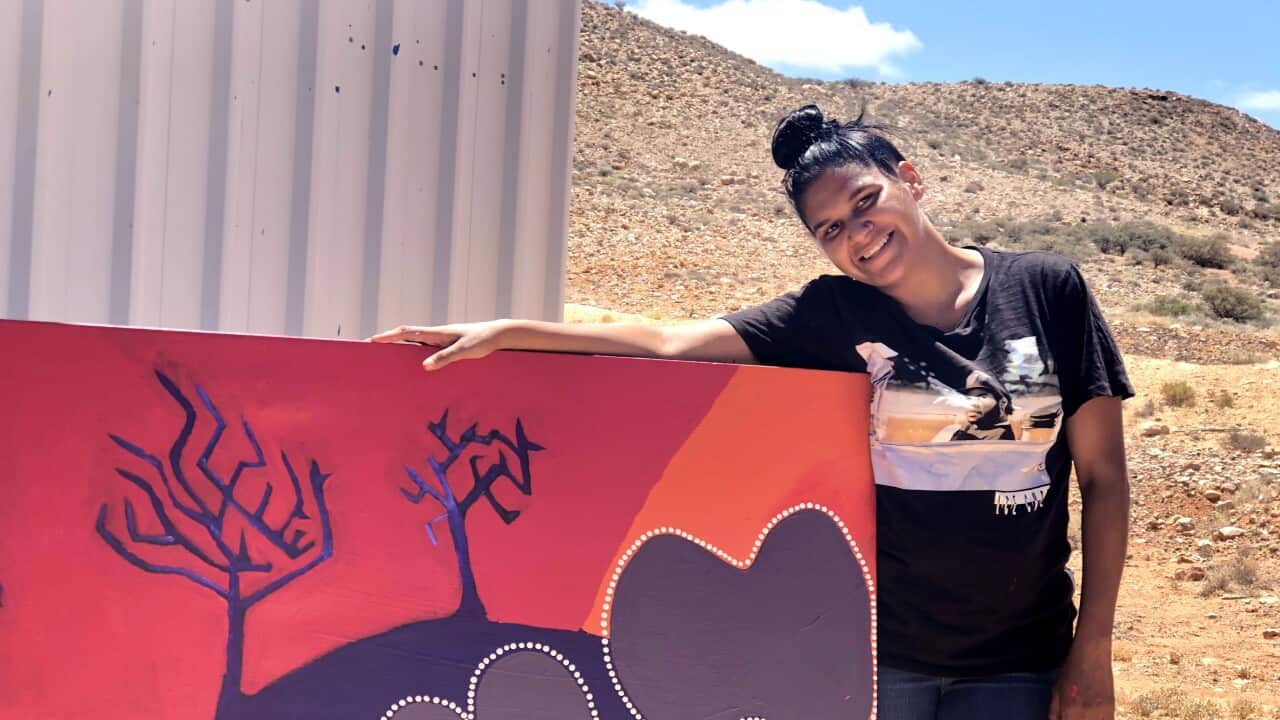 Molly Lennon is one of a new generation of artists dreaming of a day when art rather than opals draws tourists to the South Australian outback town of Coober Pedy, 800 kilometres north of Adelaide.

After decades of false starts and frustration, about 60 Aboriginal artists in the Umoona Community are partnering with the APY Art Centre Collective to create a pathway to share their paintings and stories from the area known as the painted desert country with the world.

“I find it really deadly to be a part of something new,” Lennon says. “I just hope it goes on in the future for us to get our own art gallery.”

“To be honest, that would probably bring everybody together,” she tells SBS News at a painting workshop to prepare for a second exhibition.

“I think all the young ones would probably come out of their comfort zone and start doing painting.”

A sell-out debut exhibition during Aboriginal and Torres Strait Islander art event Tarnanthi in October created a stir of excitement among critics seeing the calibre and style of artists from the painted desert country for the first time.

Artist George Cooley at work on an artwork inspired by the Painted Desert Country in the Umoona Council office. Source: Peta Doherty/SBS News

But it was no surprise to the community, which has been calling for support to establish a centre for decades.

“For nearly 50 years people have been desiring some form of centre or to get into business with tourism,” says George Cooley, Umoona Art Centre acting chair.

Cooley, an artist and opal miner whose paintings are inspired by colours of the desert, has been trying to get the centre started for 25 of those years.

“We get bypassed because we’re not far enough north to be in the remoteness of the country and not far enough south to be out of that area,” he says.

He has watched the international success of artists working out of Commonwealth-supported arts hubs further north.

We get bypassed because we’re not far enough north to be in the remoteness of the country and not far enough south to be out of that area. - George Cooley, Umoona Art Centre

Just two hours north in the Indulkana Community, Iwantja Arts is one of the most successful art centres in the country.

O’Meara believes the Umoona artists will follow a similar trajectory if they are given the support they need.

“I think we are looking at an art centre that will be one of the most successful art centres in Australia today in the next five years,” she says.

“We’ve got a bunch of artists here, some on their very first artworks, who have waiting lists at our little gallery in Adelaide."

But there’s still a long way to go. The newly-formed collective need somewhere to gather and paint.

Umoona Council is providing space to artists for the workshop. Tubs of desert-coloured paint and drop sheets splattered in it cover office furniture in the small demountable, and there’s still not enough space for the larger works.

Outside, it’s a constant battle to keep canvasses dust-free, and with temperatures now beginning to soar into the high 40s they’re hoping to secure funding for a permanent art space.

Start-up funding of $150,00 for two years would unlock a Commonwealth building grant.

A Productivity Commission review is also looking into opportunities in the Aboriginal and Torres Strait Island Art sector.

O’Meara is determined these artists will not be left behind again.

“It’s a time that’s really rich for opportunities so this has to move now,” she says.

“We have to find a way to get a studio building operating so that these artists can be supported with the amazing opportunities that are out there on the world stage."

Looking around at the 20 or so artists absorbed in their canvasses, Cooley says the excitement of the first exhibition has filled the community with hope.

“For this generation, I think it means a lot because it exposes them, it identifies them, and gives them an opportunity for employment -  one of the biggest things is self-employment.”

Art centres provide the infrastructure and connections that support many artists to create and market their work at art fairs, galleries and online stores.

As well as pathways to self-employment, the operation of a remote art centre creates a large number of jobs. These are especially suited to women, who sometimes struggle to find work in remote areas.

"The ladies beat me here, and there’s no need for me to go around and pick them up in the mornings "

“They’re enjoying doing something they like and they know they’re going to get something back … They’ll do as many [paintings] as they can."

"We’ve always just been so isolated, not just in Coober Pedy but in our homes too, so this has been a great opportunity for our women.

“A lot of our mums and women don’t have any opportunity for work around here, so this is something that’s bringing them out and making them feel better about themselves.”

Lennon is hoping their venture reaches the ear of the Australian Prime Minister.

“I just hope that he accepts our dreamings,” she says.

“So we could get up own gallery and have choices, and opportunities for you know what we want to do in the future.”

A second exhibition from the Umoona Art Centre, 'Opal Country', opens at the APY Art Centre Collective in Adelaide on 27 January 2022.