After moving to Australia from Nigeria, Florence Olugbemiro struggled to find dolls for her daughter that looked like her. Now she has designed a range of her own for all Australian children. 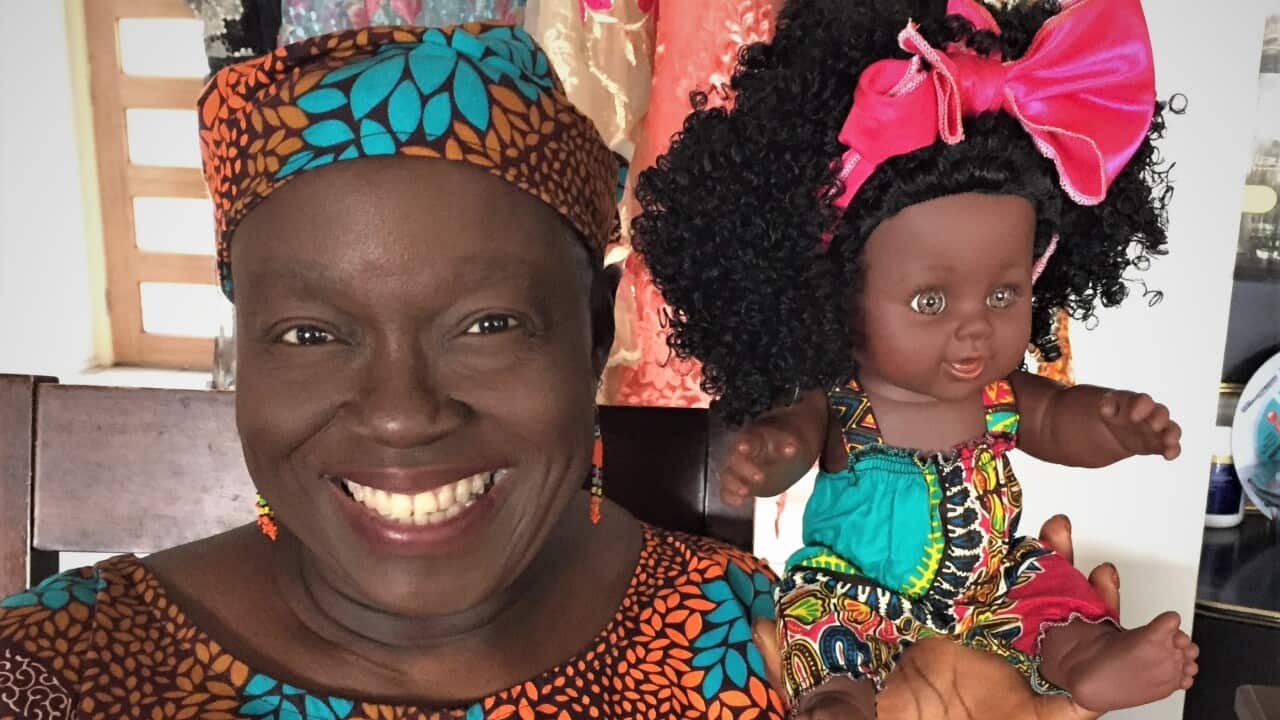 Florence Olugbemiro with one of her dolls. Source: SBS

The former computer programmer and mother of four came to Australia as a skilled migrant from Nigeria in 1998 with her husband Solomon and their three sons. She had a daughter, Shallom, soon after.

“When I first came here and I had my little baby girl, I was looking for representation dolls, and I couldn't find one,” the 54-year-old says. “So a few years ago, I thought why not introduce Australia to those beautiful, vibrant Nigerian colours through dolls?"

Advertisement
She began making her own, with the designs inspired by her homeland.

Florence Olugbemiro with her baby daughter Shallom in 2000. Source: Supplied

“I started with three dolls and the feedback from customers was like, ‘Oh there’s nothing like this!' or ‘I want my daughter to have a doll like this.'”

She has since set up a business - Designed by Florence - and has sold more than 130 dolls, with more than 500 on display at her home.

“Most of my customers are non-African, I would say around 80 per cent,” she says.

Florence has pivoted to selling online during the pandemic. Source: SBS

The clothing for the dolls is hand-sewn in Nigeria by local women. Many are single mothers struggling to make ends meet and it's Florence’s way of giving back.

“My main seamstress is a single mom and her name is Emi, which means patience [in the native Ibibio language].

“She is struggling to raise three kids after her husband left. She has a really tiny shop but she is able to bring in an income.”

Florence Olugbemiro as a baby with her mother in Nigeria. Source: SBS

Florence’s own mother raised her three children alone after separating from her husband when Florence was young. She later gained a scholarship to study at Oxford University and returned to Nigeria to be a social worker.

“My mother was raised to believe you can do anything, so from a very young age I learned to be self-reliant,” she says.

READ MORE
Children's books must be diverse, or kids will grow up believing white is superior

“I was diagnosed in March 2015 with second stage breast cancer and that was very, very hard for me. I had surgery and radiotherapy, and then was placed on treatment for the rest of my life.”

The impacts of the COVID-19 pandemic last year also meant she could no longer sell her dolls at local markets, so she went online.

She now sells them through not-for-profit online platform Global Sisters Marketplace, a hub of hundreds of entrepreneurial women.

“With no more markets, many women like Florence lost their incomes,” its founder Mandy Richards says.

“We have a lot of single mothers and a lot of older women who've lost their jobs and cannot get another job once they've hit that 50-55 age range.”

“Our marketplace gives these women an instant online presence and the ability to sell straight away."

But the opportunity to increase the diversity of the dolls available for children in Australia is what's really driving Florence.

Her own daughter Shallom is now 21 and says she wished she had a doll with afro hair when she was younger.

"Growing up, I always heard ‘oh my gosh, your hair is so different' and people wanted to touch it.

"So having a doll that people can actually touch and see, helps them understand what afro hair looks and feels like."

Dr Jonnell Uptin is an intercultural identity expert at Sydney University and is raising a daughter who she adopted from Thailand. She says a lack of diversity in children's toys isn't just an issue in Australia.

“We were living in Thailand when she was five years old and she wanted a doll for her birthday. I went everywhere and I could not find a doll that looked like her.

“So, in Thailand, I had to buy a doll that looked like me!”

Dr Uptin published a study last year about the experiences of young African Australians growing up in Australia.

It found despite Australia being one of the world's most multicultural countries, skin colour remains a great divider.

Being viewed as ‘visibly different’ impacts everyday life found the study, which was titled 'If I peel off my Black skin maybe then I integrate'.

Florence deisgns dolls in a range of styles. Source: SBS

Dr Uptin welcomed Florence’s initiative to broaden the range of dolls available for children in Australia.

“By playing with Nigerian dolls, children are opened up to the whole idea that there's a diverse world and there are other ways of seeing the world, and this is normal.”

"Bringing in more cultural diversity, more cultural awareness, not only for children but also for their families as well, I believe that is going to impact the whole of Australia," Florence says.