The Taliban was expected to take three months to capture Kabul. In reality, it took a day

ANALYSIS: The Taliban's lightning offensive to re-take areas of Afghanistan started in May, triggered by the withdrawal of US-led foreign forces. 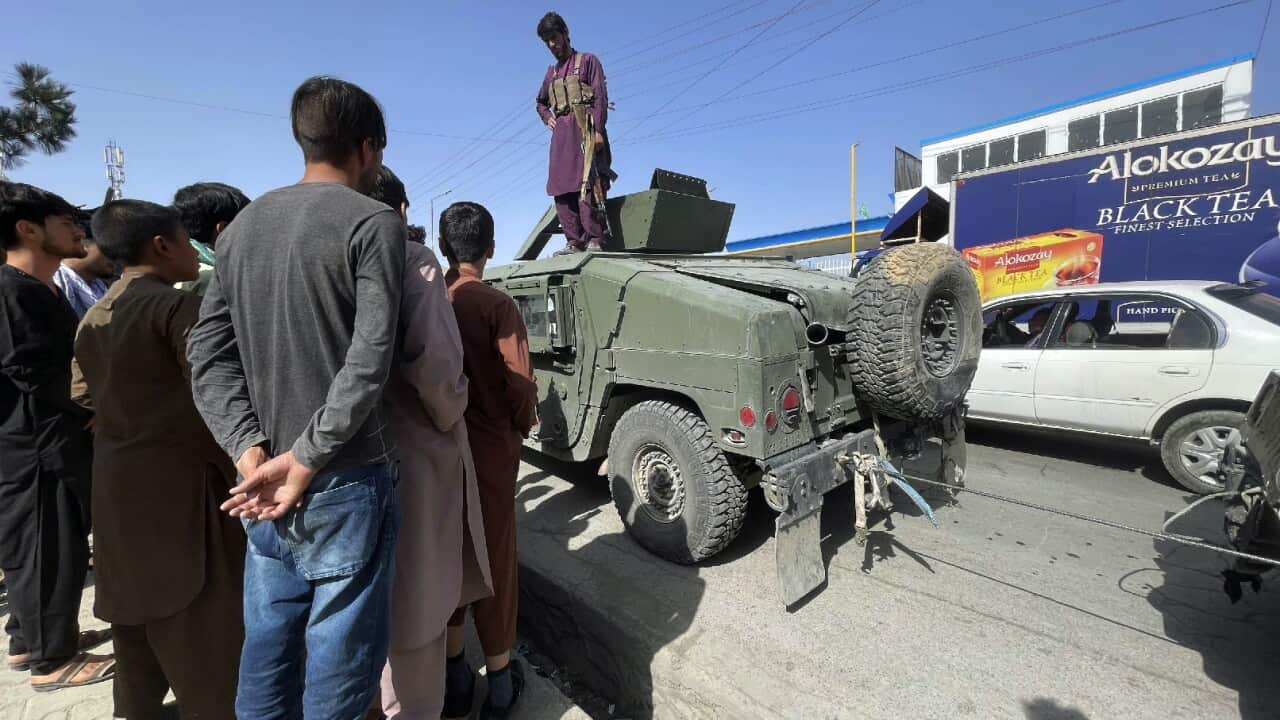 A member of the Afghan security force stands on a Humvee tank in Kabul, Afghanistan on 15 August 2021. Source: Getty

There was no resistance as the Taliban took control of Kabul in a single day, 20 years after it was removed from power by US-led forces.

In reality, the task was achieved in just one day. Jalalabad was taken on Sunday morning with no shots fired. Kabul's surrounding cities were next. And within hours, Taliban forces were in Kabul.

"It was a terrible failure of US intelligence," Emeritus Professor William Maley at the Australian National University told SBS News.

"It underestimated the extent to which the political situation in Afghanistan could unravel very swiftly indeed.

"It also underestimated the extent to which the confidence of people in Afghanistan - that there was actually a future to hold - had been totally sapped by the American decision to abandon Afghanistan to its fate."

Why was Kabul's fall so rapid?

The factors leading to rapid fall had its roots in the deal negotiated between the US and the Taliban in February 2020.

The talks in Doha culminated in an agreement for the withdrawal of US troops and the release of 5,000 prisoners held by the Taliban. In exchange, the Taliban were given a place at the table for peace talks.

Prof Maley said the deal hastened the collapse of Afghanistan.

"Put these two things together - and Afghans read it as a sign that the Americans were really switching sides out of their own interest. And that then had bad effects on morale."

What accounted for the collapse of the Afghan government?

In a moment that marked just how quickly government officials capitulated to the Taliban's recapture of the city, President Ashraf Ghani fled the country.

In a statement posted on Facebook, he said he had no choice.

"I was faced with a difficult choice today: wait to face armed Taliban entering the Presidential Palace or exit the country. I chose to exit so I could prevent this bloodshed."

In May, early on in the Taliban's campaign to recapture territory, it started by sending small bands to rural outposts to negotiate with low-level government officials.

They were convinced to hand over control to the Taliban in exchange for bribes and guarantees of safe passage.

Afghan President Ashraf Ghani fled the country on Sunday, saying he had done so to prevent a "flood of bloodshed". Source: AAP

Afghan officers' efforts to defend territory were subsequently left weakened by the loss of support from local leaders.

Prof Maley said the fragmented networks that formed the government meant it was not able to rally against the Taliban's tactics.

"Politics in Afghanistan had become overly dependent on patron-client networks, rather than on institutions or political parties," he said.

"And networks tend to unravel when the going gets rough. And that was something which Afghan politicians discovered."

How have the regional dynamics been impacted?

The growing influence of the Taliban to consolidate territory in Afghanistan was no accident, according to Prof Maley.

He said Pakistan played a very deliberate and strategic role in the rise of the Taliban as part of their goal to "achieve the subordination of Afghanistan, so they wouldn't have a pro-Indian Afghanistan for the West".

"It is pretty clear that whilst there may have been roving Taliban bands in various parts of the country - there was an overall level of strategic direction in the choice of targets, in the choice of equipment, in the management of tactics. Which is far above what one would expect of any kind of guerrilla group.

"It points to the involvement of the intelligence services arm of the Pakistan armed forces in orchestrating these activities."

Comparisons have been drawn between the scenes of chaos in Kabul as US embassy staff evacuated and the fall of the capital of South Vietnam, Saigon, to North Vietnamese forces in 1975.

US Secretary of State Antony Blinken was quick to dismiss any comparison.

"This is not Saigon. We went to Afghanistan 20 years ago with one mission, and that mission was to deal with the folks who attacked us on 9/11 and we succeeded in that mission," he told CNN's State of the Union.

Prof Maley said the power dynamics have shifted, with the rapid fall of Kabul marking the beginning of the end of US as a great power.

"Russia and China undoubtedly have reasons to celebrate at this point because the embarrassment, humiliation, disastrous performance of the United States in Afghanistan may well mark the beginning of its definitive decline as a great power - in the place of those other rising powers."

Can the Taliban's promise of a more moderate rule this time around be believed?

Taliban co-founder Abdul Ghani Baradar said there will be no reprisals for Afghans who supported the US-backed alliance.

"Now it's time to test and prove, now we have to show that we can serve our nation and ensure security and comfort of life," he said.

Under the Taliban's rule 20 years ago, flogging and execution were used to punish those violating its rules, including a ban on women attending school or appearing in public without full-body coverings and escorted by a male.

The Taliban has said under its rule this time, women would be allowed to participate in public life.

"I would take it with a pinch of salt," he told SBS News.

"The Taliban spokesman has said it will respect the rights of women and that they will be allowed to work and receive education.

"But at the same it has qualified that statement - by saying it will be according to Islamic law - that is Sharia law. And of course we know that the Taliban's interpretation of Islamic law is a very strict one.

"And I wouldn't be surprised if they applied that very strict application of Islam to women across the country."