The town of 10,000 widows, where women are starting to rebel

The women of Vrindavan in India have been disowned by their own children, but they're finding strength in numbers. 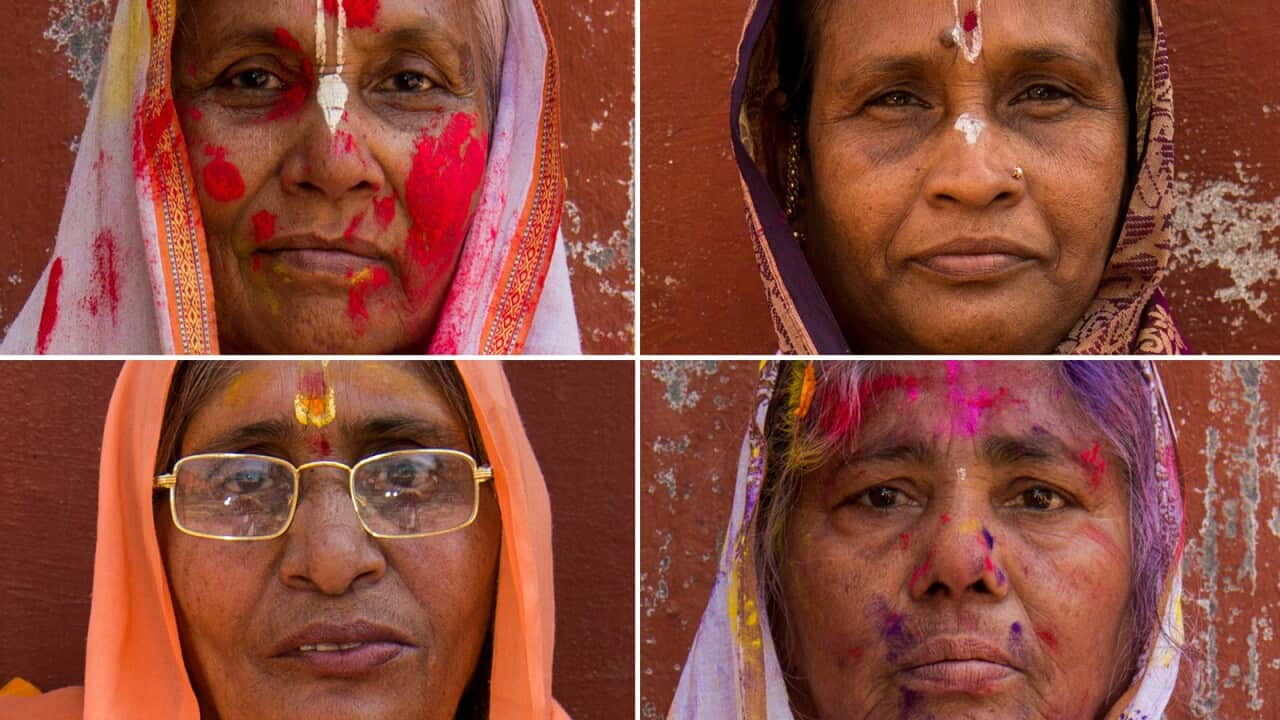 Women in a Vrindavan ashram for widows, photographed around Holi in February 2018. Source: Chandan Khanna / Getty

Poornati Das has travelled from her home in the eastern Indian state of West Bengal, to Vrindavan, one of the country’s holiest sites.

Following in the steps of thousands of women before her, the 70-year-old, with her long grey hair and square-rimmed glasses, covered 1,400km by herself to begin a new life in the dusty town, on the banks of the Yamuna River.

Advertisement
Vrindavan, which is believed to be the birthplace of Lord Krishna – one of the most revered Gods in Hinduism – is dotted with thousands of temples, ashrams and markets filled with souvenirs.

It is also home to more than 10,000 widows who have either been disowned by their families or who are simply alone.

Women in a Vrindavan ashram for widows, photographed around Holi in February 2018. Source: Chandan Khanna / Getty
Poornati’s husband died in 2011, and although she continued to live in the house they shared together, as she aged and became frailer and it was too hard to manage alone. Her son and daughter-in-law refused to take her in.

Instead, three months ago, she joined 80 other women who live at an ashram run by Maitri India, a local NGO which began providing shelter, food and stipends to widows in 2011.

Poornati (centre) at the ashram run by Maitri India. Source: Sophie Cousins
Women like Poornati are considered the lucky ones. The majority of widows in Vrindavan live on the streets and survive by begging. While the government runs ashrams, they only accommodate a fraction of what is needed, leaving NGOs, charities and religious organisations to step in.

India has about 46 million widows, the largest widow population in the world. But despite their huge number, they remain one of the most stigmatised, neglected and marginalised groups.

India has about 46 million widows, the largest widow population in the world.

In many parts of the country, particularly in West Bengal, widows are bound by strict age-old customs including being barred from participating in any festivals and remarrying; forbidden from wearing colourful saris and jewellery, and often forced to shave off their hair.

But, in strong defiance of old customs and a sign that things are slowly changing for widows, Poornati refuses to only wear white and has let her hair grow. She also dons a gold bracelet.

“I like to wear colours,” she said. “My son told me to not to fear; to not to only wear white.”

And she’s not the only one; many women in her new community have swapped their white saris for colourful ones.

India is home to about 46 million widows. Source: Sophie Cousins

“It’s a very different scenario these days, even compared to three years ago,” she said.

“Why the change? I think there is someone who is listening to them.”

But, she stresses, such changes do not mean the widows’ status in society is changing.

Ms Singh said she is also witnessing another change: more and more women are arriving from other parts of India as well as West Bengal. She blames urbanisation for the change.

“The widows’ stories are the same: their children don’t want to take care of them. Urbanisation is taking away a lot of the values India used to have,” she said.

The widows’ stories are the same: their children don’t want to take care of them. - Winnie Singh, Maitri India

“We used to say that elderly women are a sign of wisdom and that they should be cherished and revered but that doesn’t happen so much anymore.”

Unlike Poornati, she is dressed in white because she believes that no matter at what age a woman becomes a widow, “you have to wear white”.

But in another sign that traditions are slowly being dismantled, she said her favourite thing about staying in Vrindavan was being allowed to celebrate festivals.

“We play Holi [the Hindu festival of colours] with lots of colour and flowers,” she said as she showed photos from the last celebration.

Bindeshwar Pathak, sociologist and founder of Sulabh International, a local organisation that supports Vrindavan widows by providing monthly stipends, is the orchestrator of the colourful rebellion against traditions. In 2013, Dr Pathak began leading widows in an annual celebration of Holi.

“If a husband dies, the woman loses everything … she’s not even allowed to sing, or dance. I decided it was time to break traditions and encourage widows to celebrate Holi and Diwali [the Hindu festival of lights],” he said.

If a husband dies, the woman is not even allowed to sing, or dance. I decided it was time to break traditions. - Bindeshwar Pathak, Sulabh International

“Initially there was some resistance from sadhus [holy people] but now they join in the celebrations. This is very important because now the entire country knows that the widows of Vrindavan celebrate festivals.”

This mini-revolution has sparked an ongoing national debate about improving the lives of widows.

But while the movement may be gaining strength each year, there’s little sign that the influx of widows to Vrindavan will abate any time in the near future.

“Our children don’t take care of us because they are so busy in their own lives,” Poornati said.

“I have faced many difficulties being a widow but now we have people here who take care of us.”