'They're after our young ones': Margaret Court renews attack on 'gay lobby'

Australian tennis legend Margaret Court has doubled down on her controversial comments rejecting marriage equality, telling a Christian radio program the 'gay lobby' is attempting to corrupt the minds of children and promoting the devil's work. 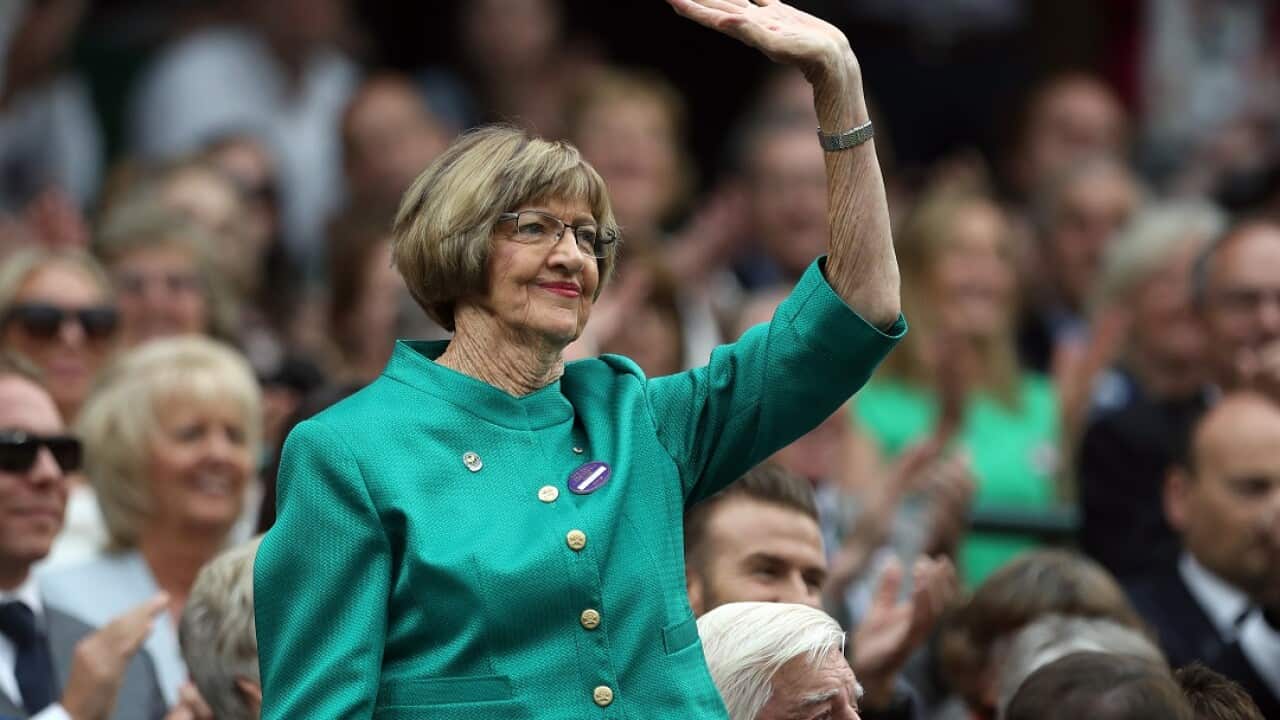 Margaret Court on day six of the Wimbledon Championships at the All England Lawn Tennis and Croquet Club, Wimbledon, 2016. Source: AAP

Far from walking back criticism of marriage equality, which brought her national media attention, former tennis star Margaret Court has doubled down on criticism of the "gay lobby" in strident comments in a 45-minute appearance on a Christian radio program.

"Homosexuality is a lust for the flesh, so is adultery, fornication," she told a talkback caller on
Vision Christian Radio
.

"It’s not God and I think they too know this. This is why they want marriage, because it’s self-satisfying. I think they know it comes against Christianity."

Advertisement
The 74-year-old Christian pastor told listeners that accepting homosexuality would lead young people to "destroy their lives", claiming that US figures showed that homosexuality was caused by sexual molestation and emotional abuse in a majority of cases.

"The statistics are very, very wrong but they want us to think they’ve got the majority," she said.

"That’s all the devil, we’ll say that it’s the devil," she said.

"We remind people in a position of influence and authority of the need to be respectful, words are powerful and can inflict real damage especially to people who have been marginalised," National Director of the equality campaign, Tiernan Brady said.

"We encourage conversations between all Australians about this important issue and understand that for some people this is a difficult journey. But it is always important to remember that words matter and that we are talking about people, our loved ones and friends.

"When marriage equality is finally achieved, no one in this country will be less married or more gay."

In her radio comments, Court also took aim at her former sport, saying tennis was "full of lesbians".

"Even when I was playing there was only a couple there, but those couple that led, that took young ones into parties and things," she said.

"And you know, what you get at the top is often what you'll get right through that sport."

Court drew public criticism last week after writing an open letter saying that she would not fly with Qantas Airlines due to its support for same-sex marriage.

In her radio appearance, she linked Qantas' commercial struggles to its openly gay CEO Alan Joyce and the company's support for marriage equality.

Court, who said she was not looking for media attention, has appeared on every commercial network since issuing her letter.

She said she was "bullied" by hosts who supported marriage equality in an appearance on Network Ten's 'The Project'.

“No honour, no respect for people,” she said.

“I am absolutely shocked. Beyond shocked. To label trans and non-binary children as 'all the devil' is absolutely disgusting and to target young children is simply unacceptable," she said in a statement.

“Trans youth already suffer much higher rates of depression and suicide just for being who they are, and it’s because of comments like this."

Senator Rice said serious consideration should be given to changing the name of the Margaret Court Arena.

“Public spaces like Margaret Court Arena should be spaces where all people feel safe and included,” she said.

Earlier this week, before her latest comments, Prime Minister Malcolm Turnbull said Court was entitled to her views and that the arena named in her honour should not be renamed.

Court's comments and media appearances over the week have drawn criticism from contemporary players.

Navratilova has called for the Australian Open venue, Melbourne Park Stadium, which was named Margaret Court Arena in 2003, to be renamed.

Stosur has suggested that players may choose to boycott the venue during the January tournament, a suggestion Murray appeared to agree with.

"For players to be in a position where you're in a slam and kind of boycotting playing on the court, I think would potentially cause a lot of issues,” Murray said.

"So I think if something was going to be happening and the players come to an agreement, if they think the name should be changed or whatever, that should be decided before the event starts.

"But, yeah, I would imagine a lot of the players would be pretty offended by that. So, yeah, we'll see what happens."

When asked about Court's comments, Australian tennis ace Nick Kyrgios said on Tuesday he had “no problem with gay marriage at all”.

Court has said she has become the target of "below the belt" bullying.

"I think it’s very sad that they use my tennis for something that is a ‘now’ thing," she told Vision Christian Radio.

"And you know I think it’s bullying, and you know it’s coming back at us, because it was always that ‘we bullied’ or ‘we were homophobic’ and I think it is their way of bullying now."