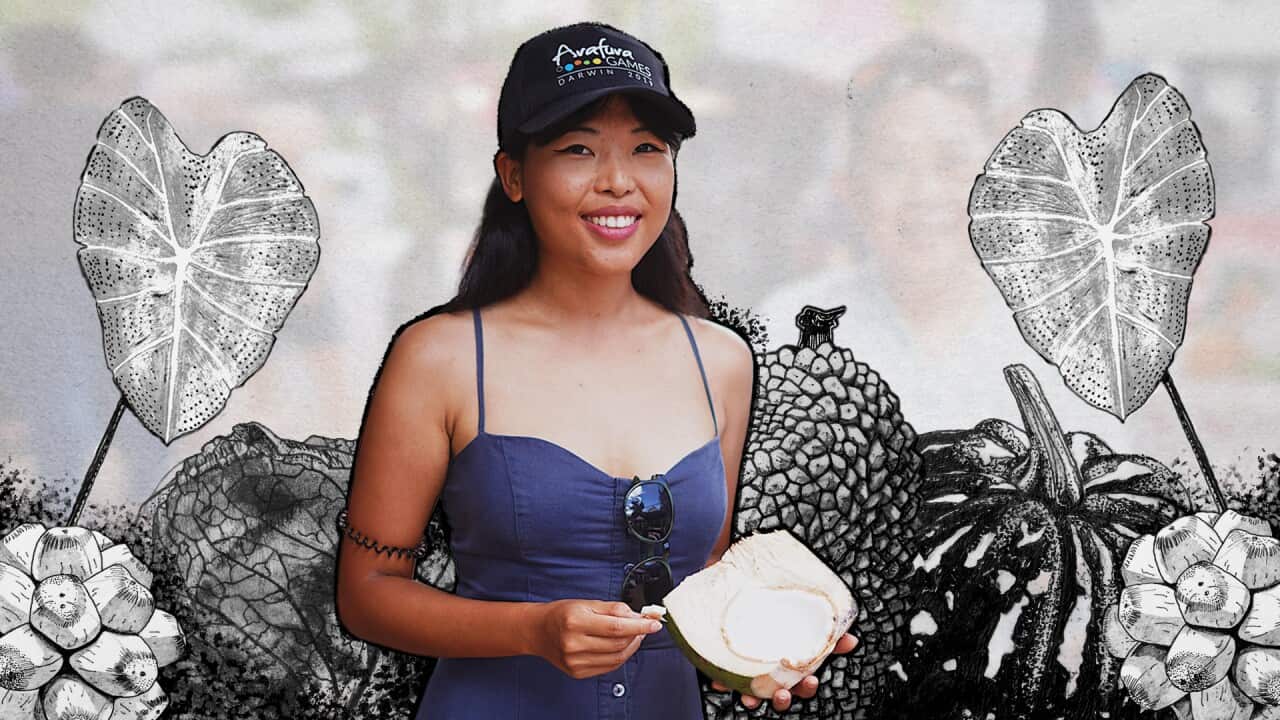 Tisha Tejaya left Indonesia when she was very young, and like many people in Australia, often felt stuck between two worlds. Then one day, she started drawing the food of her homeland.

Published Monday 28 June 2021
By Aneeta Bhole
Source: SBS
Growing up, Tisha Tejaya understood she was different from the other kids in her class. She would often get embarrassed about the traditional Indonesian cuisine that popped up in her lunchbox.

"I didn't really know who I was, and I often took that resentment out on my family.”

Advertisement
It would be some time before she would discover her history.

Food has always been a big part of Ms Tejaya's life, growing up on the edge of a mango farm. Source: SBS / , Supplied/Tisha Tejaya

"I knew my parents moved to Australia, but I thought that was something that happened to everyone," the 24-year-old says.

"I mean, we are a country of migrants."

It wasn’t until later that she found out about the political turmoil that made her parents leave Jakarta with her when she was just two years old.

I knew my parents moved to Australia, but I thought that was something that happened to everyone. - Tisha Tejaya

In May 1998, riots triggered by economic problems, mass unemployment and a shortage of food, swept across Indonesia. Civil unrest gave way to violence, the main targets of which were members of the Chinese-Indonesian community.

Many people were killed during the riots as a result of a massive fire and at least 168 cases of rape were reported at the time.

To escape the conflict, the family of three fled to Darwin on a multiple-entry tourist visa, which did not enable Tisha’s parents to work.

It was there that food would quickly become an intrinsic part of her story.

"When we first came to Australia, we didn't have any money, so we lived in a caravan on the edge of a mango farm," Tisha says.

"We relied on the generosity of growers around Darwin to give us food from their bumper crop when we were hungry.

"Food is a massive part of my life and as a teenager, I took it for granted."

Tisha went on to study law in Canberra at the Australian National University.

While living away from home, her parents would often send her an abundance of fruits and vegetables from the local Darwin markets - Parap and Rapid Creek - in care hampers.

Known for their famous Laksa, the markets also boast fruit and vegetables likened to those in southeast Asia, like the Daikon and Dragonfruit which became a source of inspiration and reminder of home for Tisha.

Ms Tejaya has done close to 72 drawings, each with its own story. Source: SBS / , Supplied/Tisha Tejaya

During one particular bout of homesickness, Tisha decided to take out some pencils and ink, and start drawing the produce she had received in one of the hampers.

Growers and vendors selling their produce at the Parap markets. Source: Supplied

It was there that her passion for illustrating began, and with it, she began to feel closer to home and her homeland.

"It never clicked to me how unusual it is to have the produce here in Darwin, so similar or virtually the same as the produce that my parents would eat back in Indonesia."

After graduating, the yearning to return to tropical Darwin and be near her family saw her head back to the Top End to practice as a lawyer in 2018.

Upon her return, Tisha spent hours wandering the busy stalls at the Parap and Rapid Creek markets, recollecting how much comfort she’d derived from the same simple fruits and vegetables during her time away.

As she browsed the throng of stalls, she began to notice that with each item traditionally used in Indonesian cooking, came a story emerging from the vendors.

Ms Tejaya with her aunt Hong looking at fresh produce for her illustrations. Source: SBS

"When I was at the market, I'd ask growers, ‘how do you cook this thing’, and they'd tell me the story about what it is and the way you can cook it,” she says.

"Then that would remind them of when they were back at home, and they didn't have anything else to eat. Then all these stories came out."

I'd ask growers, ‘how do you cook this thing?’ ... Then all these stories came out.

Before long, Tisha would have more than 70 drawings of different fruits and vegetables, with each one following the same pattern to collect.

"When I first want to draw something, I'll find it at the markets, and I'll take lots of reference photos," she says.

"Then I'll buy the product and bring it home properly, look at it and turn it around to really understand what it is.

Ms Tejaya says the process of creating the artworks takes a lot of planning and visits to Darwin local markets. Source: SBS

"After that, I'll start doing a very light pencil outline of the drawing based on the photos or the vegetable or fruit in front of me, and transfer that onto a bit of card paper and ink it with some fine liner pen."

The result is a stunning collection of pencil and ink drawings of fruits and vegetables from the markets - each hand-drawn.

Tisha has turned her work into the Parap and Rapid Creek Market Pocketbook and hopes to expand it next month to include more of the stories she has gathered from the people behind the food.

One of the drawings in the Parap and Rapid Creek Market Pocketbook. Source: Supplied

"I knew I had these questions, but memories can be really painful, and people don't always want to talk about stuff. But when I was talking about food it made things easier," she says.

She even managed to discover more about her own family’s past during conversations sparked by the produce.

"I found out my mum was visiting her family one afternoon in May 1998, and she got caught in a riot, which was horrifying.

Tisha and her aunt Hong Teo at the Parap Markets. Source: SBS

"Thankfully nothing happened to her because she managed to escape into an alleyway and some very kind neighbours took her in.

"But it was at that point she realised this wasn't the place she wanted to raise a child, especially if I had to go through what her and my dad went through."

Hong Teo is Tisha’s aunt and also lives in Darwin. She says the family were "so proud" when she transformed her illustrations and stories into a book.

"I remember when she was just four years old, we went to a supermarket and I'd tell her to choose which mushrooms were nice. She loved cooking from a young age."

"I think cooking is a very communicative language, if you're angry, you cook something spicy. If you're sad, you do the same. It helps you express yourself."

Ms Tejaya says growing up as a child of a migrant can often mean you’re stuck between two worlds. Source: SBS

Hong says she has also used food and cooking as a way to reconnect with Indonesia after leaving close to 20 years ago.

"I don't miss it that much anymore but when I first came here, I used to cry, so when I cooked, I remembered home and I also got to introduce it to my family here."

“Doing the book and really understanding the struggles my family went through gave me so much more empathy,” Tisha says.

Ms Tejaya says Food is such a great way to communicate and bring people together. Source: SBS

"Food is such a great way to communicate. I think it helped me build a rapport with my family that I didn't know I could reach."

"It made me realise that my parents weren't being mean when they acted a certain way, they were doing their best, and I would have done the same if I was them now that I know what they've been through.

"I'm so grateful that simple fruit and vegetables could bring us closer."