This Remembrance Day, Australians are being asked to remember veterans who still need help

This Remembrance Day, a former soldier is urging Australians to remember those who have completed their service, but who still need help - as well as those who have died. 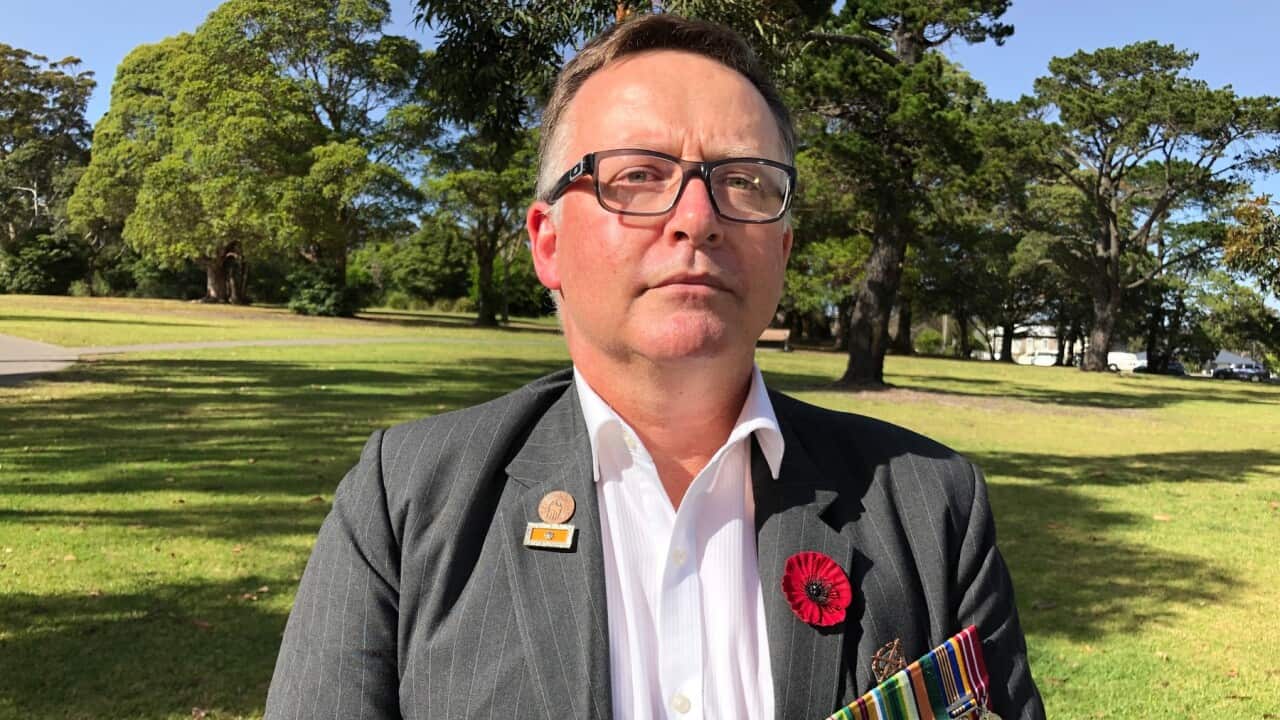 Brad Copelin served in the Australian Army for 24 years.

He enlisted as an infantryman at the age of 17, serving with distinction until he was forced into medical retirement in December 2011.

Advertisement
The "hyper-vigilance" is the worst part.

"When I go into a cafe with my girls, I sit with my back to the wall so I can see the entire area, how to get out, all those types of things," he said.

"At times I still get nervous about rubbish and stuff piled up on the side of the road, because in Afghanistan they blow up.

"It's hard to switch that off.

"A couple of years ago, my wife and I were driving down the Eastern Distributor, and a Coke can started rolling across the road and I just yelled "stop stop stop", which I would have if we were in a military vehicle, purely because I thought someone had put a bomb in it.

"I didn't think about that, it just came out straight away - and that's one of the hardest things to deal with."

The appeal raises funds to support programs and initiatives for veterans and their families in times of injury, illness and crisis, with veterans including Mr Copelin acting as ambassadors for the campaign.

This year, the Poppy Appeal is encouraging people to remember not only those who have fought in previous wars, but also those who continue to serve and those veterans who still need assistance today as a result of their service.

Mr Copelin's daughters, Nardia, and Liv, are Poppy Appeal Junior Ambassadors, and probably know more about PTSD and veteran health than anyone their age.

Mr Copelin describes his girls, and his wife, as his "rocks".

Nardia and Liv have learnt to recognise when their dad is struggling, but Mr Copelin would like to see more support for family groups.

"Even the support you can get through some of the government organisations, they're heavily veteran-focused, not family-focused," he said.

"We do need to honour our fallen, but we need to support the living.

"Because there's a lot more living these days, than there are dying at war.

"We're lucky, we're not losing the numbers we were losing in World War One and World War Two."

Long gone are the days of denial that accompanied his retirement.

"But it got to the stage where I had to admit to myself I was having problems."

Since his forced medical retirement, Mr Copelin has found ways to cope with his PTSD - he competed at the inaugural Invictus Games in London in 2014, and was assistant manager at the Orlando Games.

He's also a volunteer advisor to the National Centre for Veterans' Healthcare, which is based at Concord Hospital in Sydney's inner-west.

It provides veterans with the help to achieve optimal mental and physical wellbeing through an integrated healthcare model, which works with the patient and their family and carers in all aspects of their treatment planning and goal setting.

Despite his struggles, Mr Copelin says, if he had his time again, he would still have joined the army.

"I'd do it all again, I might change little things along the way but yeah I'd still enlist again. In a heartbeat.

"Even today I still feel I've got unfinished business because I left the system too early, and then other days I look at my girls and say no, I did the right thing."

For more information on the Poppy Appeal visit
poppyappeal.com.au