Thousands of anti-government protesters are expected to gather in Malaysia's capital on Saturday to demand the resignation of scandal-tainted Prime Minister Najib Razak, despite the arrest of activists and opposition leaders just hours before the rally. 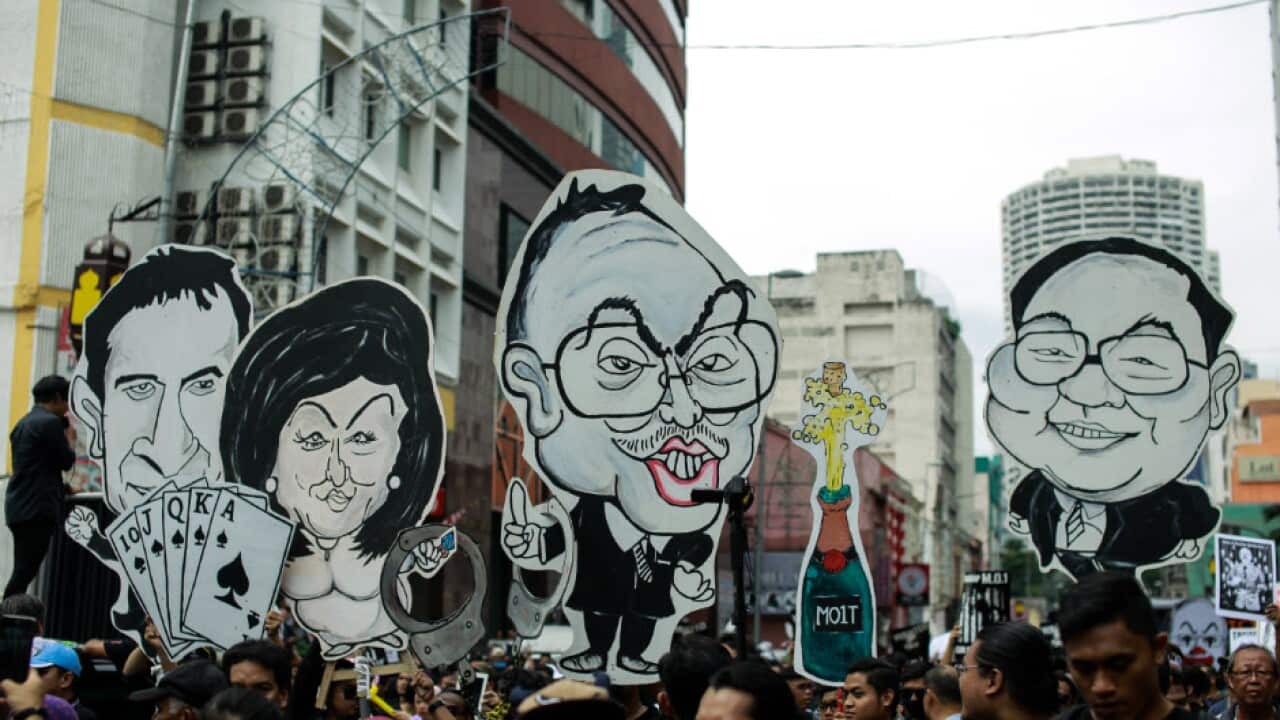 A file photo of a protest Kuala Lumpur on August 26, 2016 calling for the arrest of an unnamed high-ranking official. Source: AAP

The demonstration is unlikely to shake Najib, who has denied wrongdoing and weathered the crisis, consolidating power by cracking down on dissenters and curbing media groups and activists.

Maria Chin Abdullah, the chairperson of the election reform group Bersih, which drew about 200,000 people to the streets in a similar protest last year, was arrested on Friday.

At least five opposition leaders and student activists were also picked up by the police.

Advertisement
But the group said the protest would go on.

In a speech uploaded on his website on Friday, Najib said the protesters were "a tool of the opposition".

"Their movement is deceitful. It is clear that these street protests are in fact the opposition disguised as an independent NGO working to unseat a democratically elected government," said Najib, who is in Peru to attend the Asia-Pacific Economic Cooperation (APEC) summit.

The activist group has also called for rallies in the cities of Kota Kinabalu and Kuching on the Malaysian side of Borneo.

Fear is mounting of clashes between Bersih and a pro-Najib group called Red Shirts, who are also holding demonstrations and have threatened to target Bersih supporters. Some Red Shirts leaders have also been arrested.

Both gatherings are illegal, the police said, adding they would not hesitate to use tear gas or water cannon if things got out of hand.

Police have blocked roads leading to the venue.

"These bans are unlikely to stop activists from holding street rallies but will discourage participation from the larger population fearing police action," the Eurasia Group consultancy said in a note.

Amnesty International said the arrested leaders must be released immediately and the rally be allowed to go ahead peacefully.

Last year, more than 200,000 attended a similar rally organised by Bersih, after the Wall Street Journal reported that nearly funds from 1MDB was diverted into the personal bank account of the prime minister.

Najib ran into further trouble this year when lawsuits filed by the U.S. Justice Department in July said more than $700 million of misappropriated funds from 1MDB flowed into the accounts of "Malaysian Official 1", whom U.S. and Malaysian officials have identified as Najib.

Najib has taken steps critics say aim to limit discussion of the scandal, such as sacking a deputy prime minister, replacing the attorney-general and suspending newspapers and blocking websites.

He retains significant support within the ruling United Malays National Organisation (UMNO), and from the long-ruling Barisan Nasional coalition.

A six-week campaign by Bersih ahead of the rally has been marred by several violent confrontations with the Red Shirts, and anonymous death threats have been sent to Bersih chairwoman Maria.

Mahathir Mohamad, a former prime minister and fierce critic of Najib, on Wednesday called on Malaysians to join the Bersih rally.